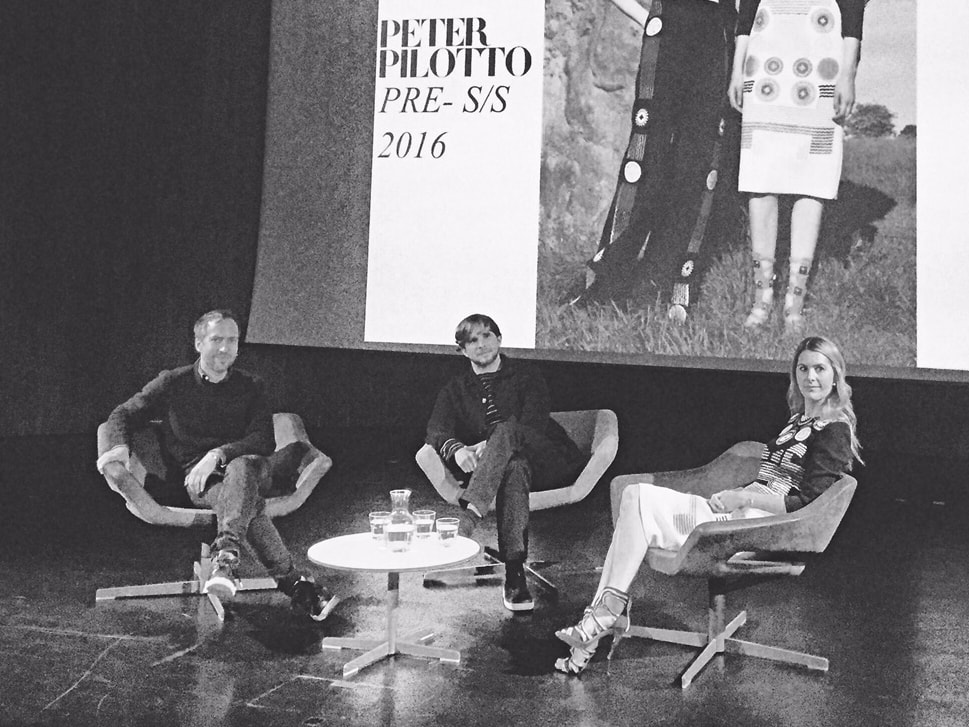 I like design duo Peter Pilotto and Christopher De Vos from the very start of their interview with Kinvara Balfour at the V&A because they’re thinkers; they exude a quiet confidence and talk carefully and honestly about their luxury fashion label. So, there’ll be no crazy, flash in the pan decisions here, no misplaced exuberance, if something happens, it’s because it has evolved naturally and implemented properly. Isn’t that refreshing and reassuring? 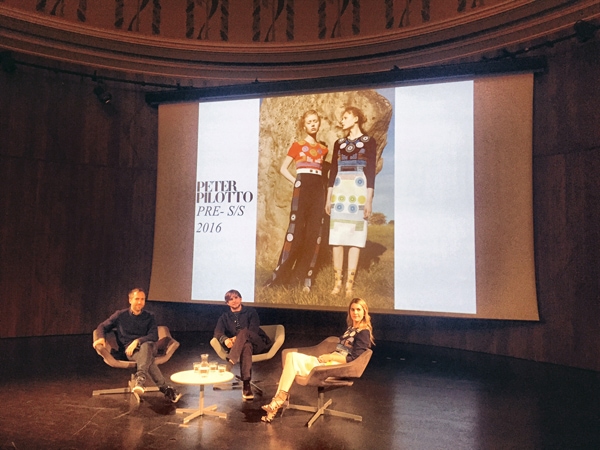 That’s not to say the label hasn’t had a touch of fate and a little luck along the way. Peter Pilotto and Christopher De Vos met at a school in Antwerp and afterwards the former was selling his graduate collection when he decided to follow Christopher to London. That was almost ten years ago when they founded the brand, and as for the name, well Christopher remembers it with humour. “We tried Pilotto De Vos, Christopher Pilotto,” he laughs. “De Vos Pilotto – we went through all the scenarios when they sounded so bad! Peter Pilotto was best.”

The first stroke of luck was courtesy of the BFC who offered their support and the label started applying for New Gen support, which they were awarded. Then, a fashion intervention happened to Peter Pilotto in the first season. Christopher recalls; “Sarah Mower called from American Vogue and asked to preview the collection and we said no, there’s no time, we’re too busy, you can see it later. We didn’t realise who she was at the time but things should happen naturally, whenever things are too forced it doesn’t work.” 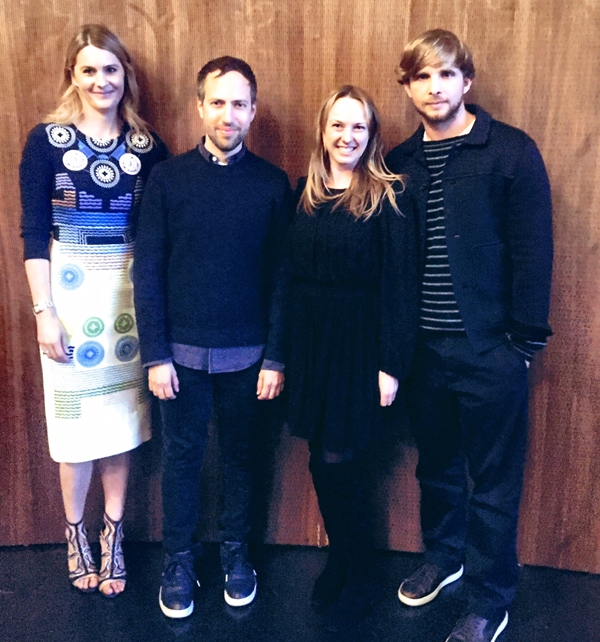 Peter Pilotto and Christopher De Vos were interviewed by Kinvara Balfour at the V&A.

If American Vogue calling wasn’t enough, Peter Pilotto was about to have a money-can’t-buy-experience. “It’s funny how it first started,” says Peter.  “It was a phone call before the 2009 show and my friend called and said ‘Rihanna, Rihanna, have you seen Rihanna? Don’t you Google yourself?’ And I was like not at the moment!” Rihanna had been busy buying (yes buying not gifted!) pieces of Peter Pilotto and then wearing them for a few days in a row.  The impact was bigger than either of them could have predicted, although now, the business of celebrities is a little more calculated and left to the PR team where the duo confirm that the ‘PR’s are proactive’ and at the moment they are looking at making something special and custom made for an A list star.

So that’s are three lucky breaks, well I call it luck, but perhaps that isn’t really fair, as the famous quote goes; ‘Luck is a matter of preparation meeting opportunity.’ Because, let’s be serious, you don’t just fluke your way to the top. For one, they may not have arrived in London with any business nous – as they even joke it was the first time they’d heard the phrase ‘cash flow’ was and got into trouble for using the phrase ‘wearable’ than commercial – but they embraced it. Which that, coupled with the right instincts and the right people has led to getting external investment into the business in 2015 as they decided it would help with growth. “We’re not business men, we’re designers,” Christopher explained. “Taking investment was about getting to the next level. Getting investment and getting the right senior people in the right place.” 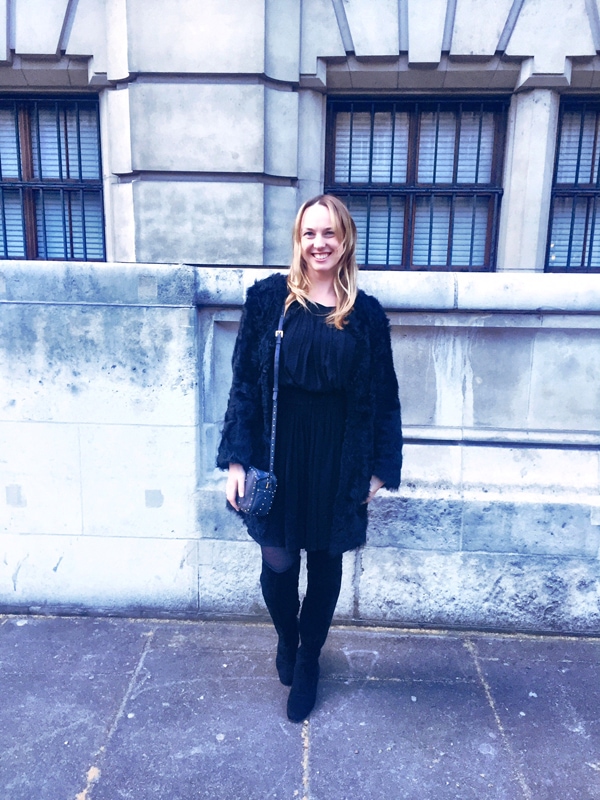 Business is business but it is also going through a huge change at the moment, it is after all the year of the monkey as Christopher notes, with enormous pressure on designers under the constant scrutiny of digital and social media to churn out more and more collections. “The workload is huge but it means you need to be organised,” Peter says of the pressure to produce four collections per year. “It’s getting faster, the whole cycle and within that crazy cycle you have to create a framework, the time and space to do what you want to achieve and have realistic goals.” On digital Peter notes; “It’s exciting because you can reach people so much faster. Fashion shows are on Instagram faster than the model is back from the catwalk. So it’s finding the balance to stay as calm as possible to stay focused.”

They also confirm that they won’t be following Burberry’s new model of selling straight from the catwalk anytime soon. “I think you can be ready for the model Burberry is doing as it has a huge impact on your back end,” says Christopher. “We wouldn’t be ready and fashion needs pace and creative takes time. How much craft goes into it, people will wait a little longer when they can see the intricacy of the fit and embroidery.” So with a lot of talk about frameworks and careful planning, it seems the collections and their timing is all strategic.  “The four seasons are about getting the right product on the shop floor at the right time.” Christopher says. “People are talking about but now, wear now. It makes you think, who you are catering for. More money and time is moving into pre collections because it’s on the shop floor for a longer time and get more sell through. We started with two collections and then three and then four but you need to be ready for it.”

Being business minded hasn’t stopped their creativity, and you get the sense that they work symbiotically. “You could say I’m more into shapes and you’re more into colour and graphics, but it’s not as simple as that,” Christopher notes. “Sometimes we switch and it’s bouncing back and forwards ideas. We’ve learned and we’ve evolved. Sometimes we don’t even talk, we just think and then you have to remember there’s a whole team and you need to explain it properly.”

They were also early adopters to fashion tech and are trialing new things even now. “We’ve always embraced technology in our designs with the digital era and digital printing and pushing it to the max,” Christopher explains. “In the beginning we bought these amazing machines from Japan and there was this whole digital print happened from there. With 3D printing, I can tell you already here’s a price issue, it might take a little while to make it commercial.”

And what does the future hold? At the moment it seems as if digital is the next step with Kinvara playfully saying the pair had better be working on ecommerce but right now the focus is on content. “Right now we’re reassessing the Instagram and the content. It’s something that needs a lot of effort these days and it can’t just be a side project. But we love seeing people wearing it and tagging it.” But as for bricks and mortar, Peter, whose family have a boutique in his hometown has the final word. “It is the dream to express your work in the store and the atmosphere surrounding the clothes,” says Peter. “We have a lot of steps along the way.” Cautious and considered to the end.