For last LCM, Belstaff took their SS16 range off to the dessert. Well to be factually accurate, they moved sand dunes into the Old Billingsgate where models stood under hot lights where outside stood an army vehicle with The Shard and Tower Bridge creating an imposing backdrop for the range. For AW16, they are #HeadingNorth so last weekend for LCM they created a cool and frosty ice cave under the arches of Southwark’s Ewer Street where, as with all good venues, it was impossible to find but for the spray painted floor signs with arrows (thank you for those Belstaff), gigantic monochrome logo outside on the brick work and the pack of fashionistas posing (CASUALLY) against it. 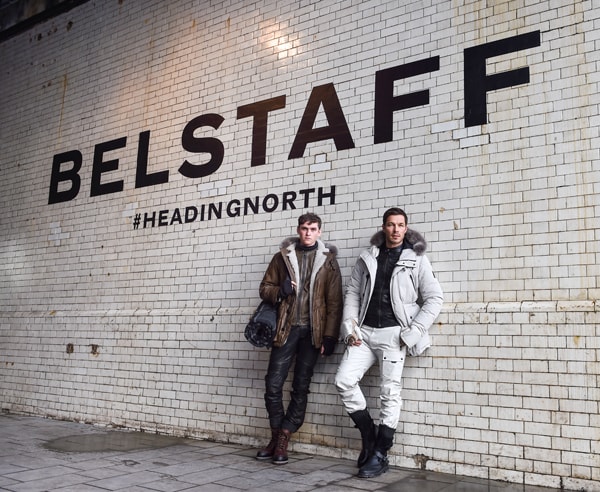 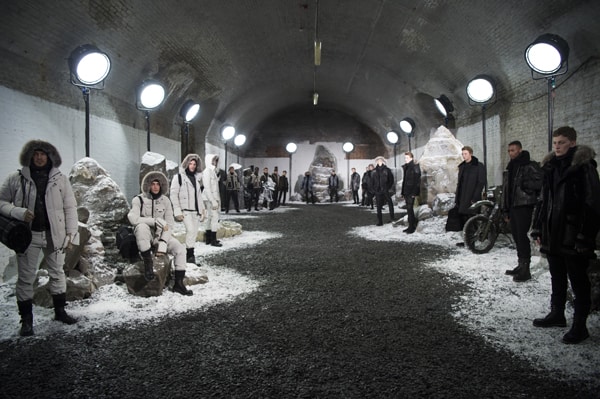 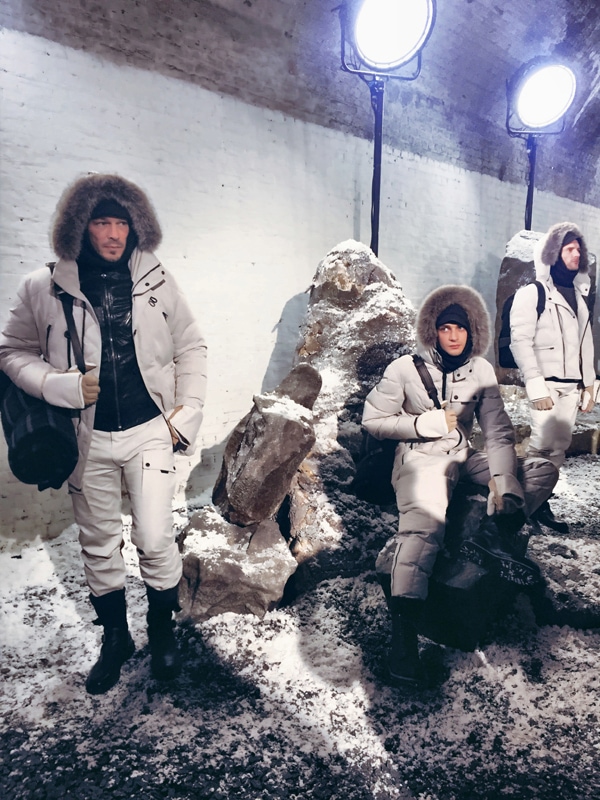 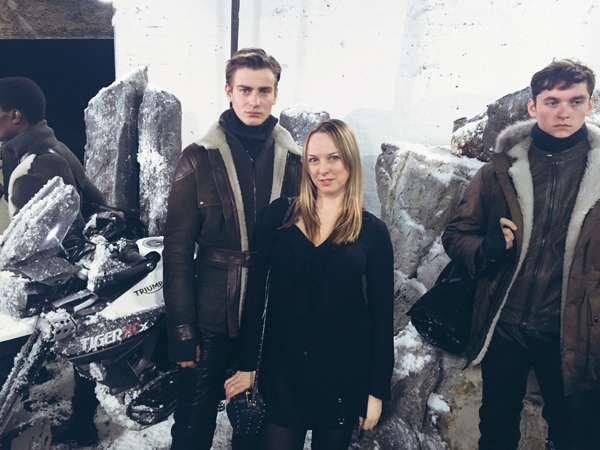 Belstaff took their concept one step further, it was bigger and better than before with around twenty of the hottest male models in town picked out by Ben Grimes Casting. I spotted Paul Sculfor looking seriously ready to take on an Arctic expedition in a furry hooded white jacket alongside Simon Clark, Felix Friedman, Tim Schuhmacher, Sven De Vries, Sang, Do Byung, Wook, Brad Allen, Adonis Bosso, Anthon Wellsjo, Jacob Coupe, Felix G, Oliver Kumbi, Abiah H Bastien, Thierry Xavier, Buestel Matthew, Bell Hideki, Elliot Vulliod, Anders Hayward. All of whom, were all styled up by Mattias Karlsson with haircare from Fudge by Teiji and grooming by Maria Comparetto. 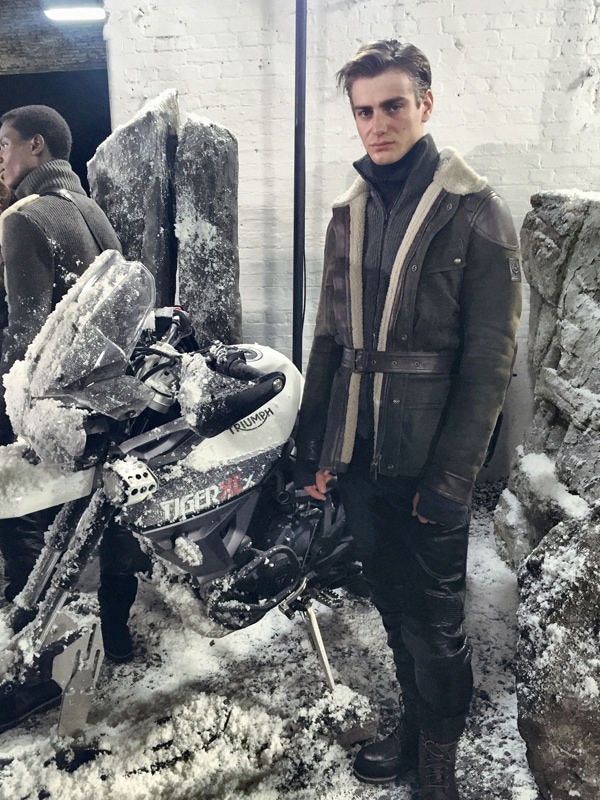 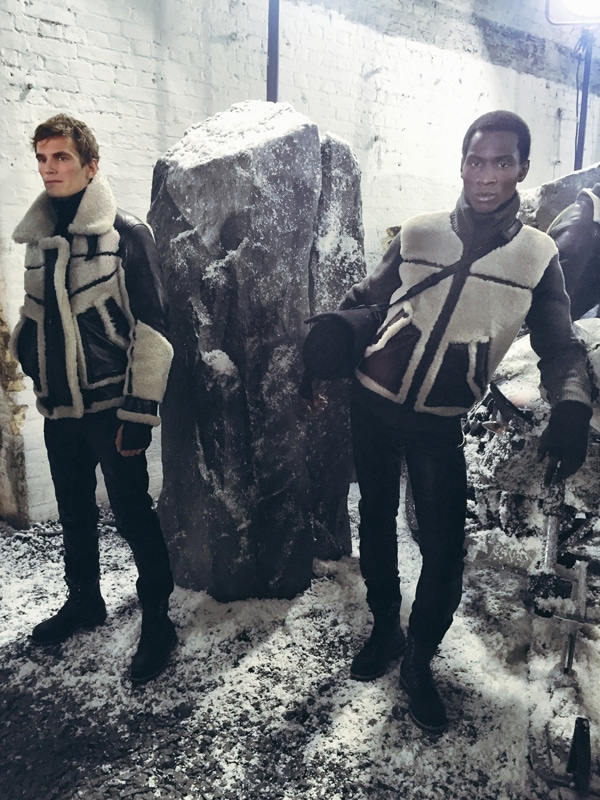 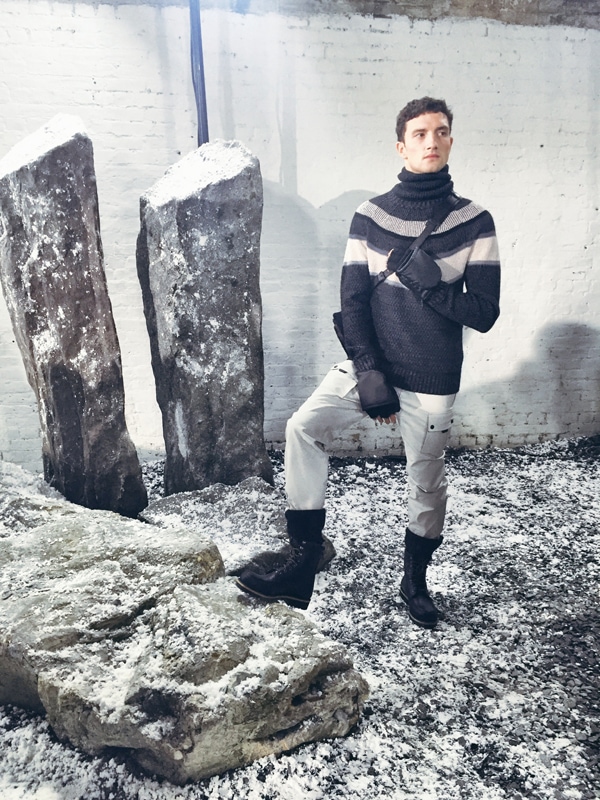 Belstaff’s collection is designed to conquer all terrains and by that I know they mean that you can wear it on top of a glacier or in a cave somewhere, but let’s be serious, the UK can be just as treacherous. Expect pieces you can layer up with that include Arctic duck-down parkas, wool and cashmere overcoats, textured shearling jackets influenced by traditional biker styles and finished with fur trims plus serious pieces of knitwear built to double up as outerwear. 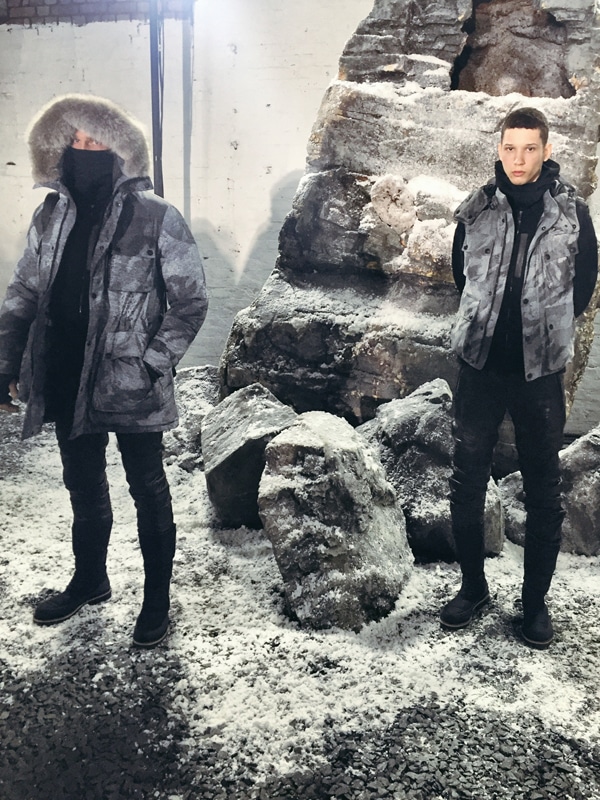 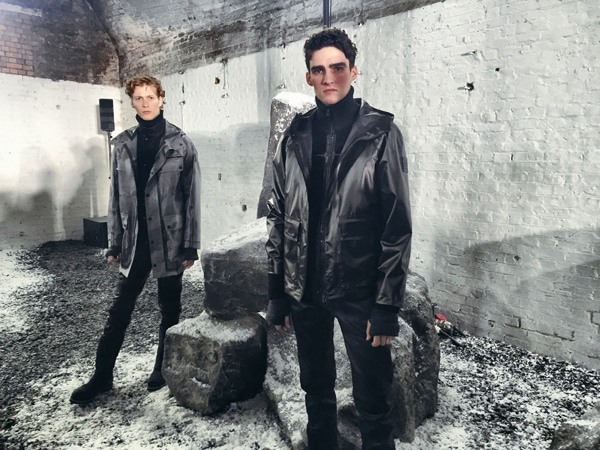 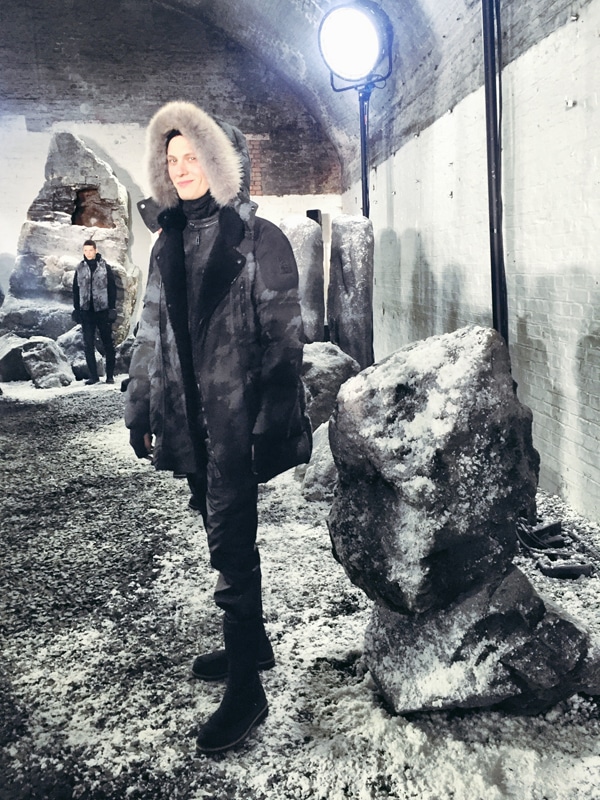 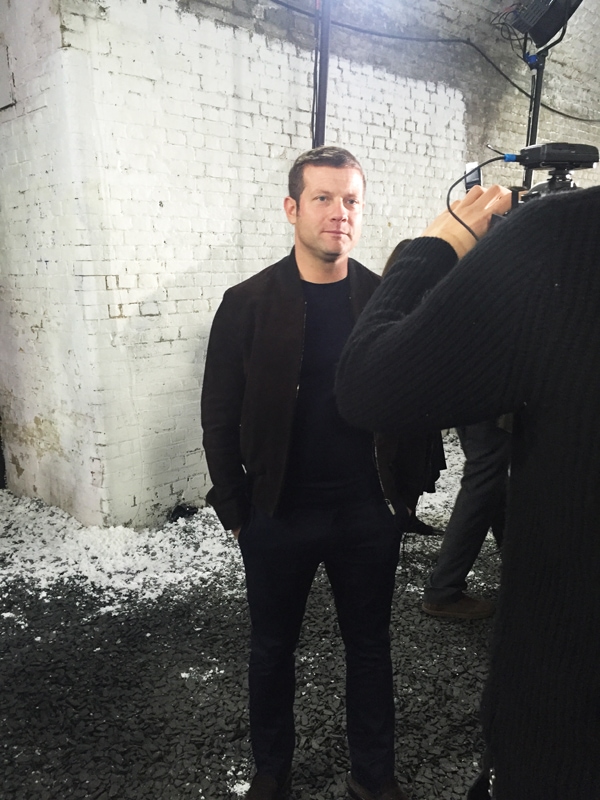 Belstaff also were celebrating an exclusive link-up for London Collection Men’s with the new Zoolander 2 film with a cocktail named ‘Blue Steel’. Dear readers, I didn’t let a little thing like it being 11.30am put me off, so in the name of supporting Belstaff, I had two Blue Steel Cocktails made with Ciroc vodka. So you can forgive me for springing onto the set for a picture with the models. Well, you can’t really can you? Just don’t judge me, blame the cocktail! 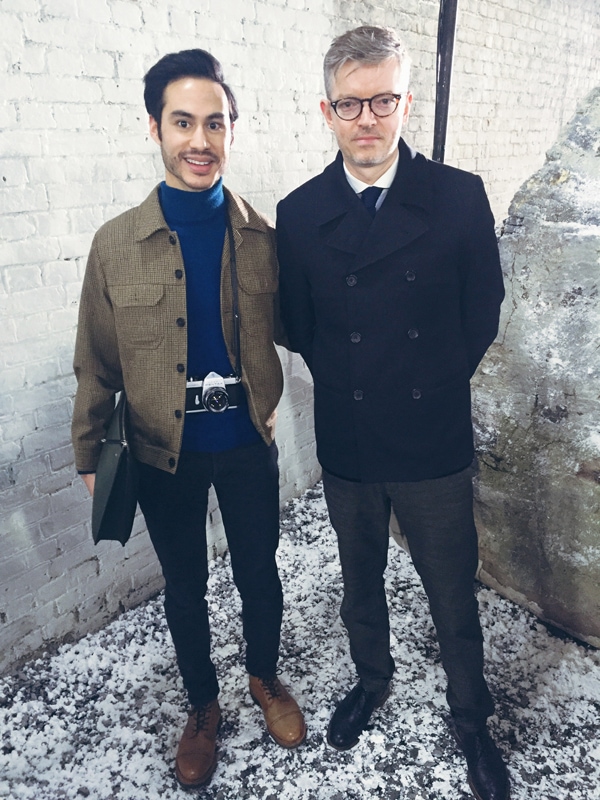 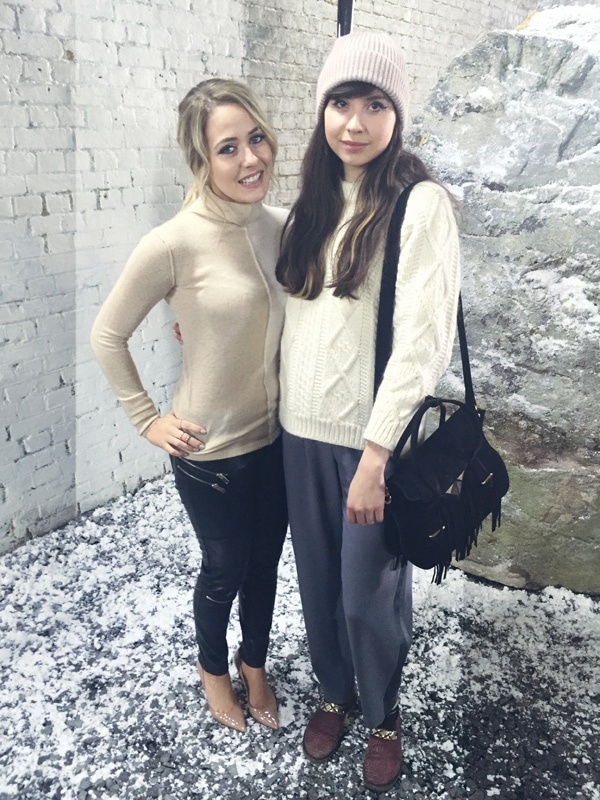 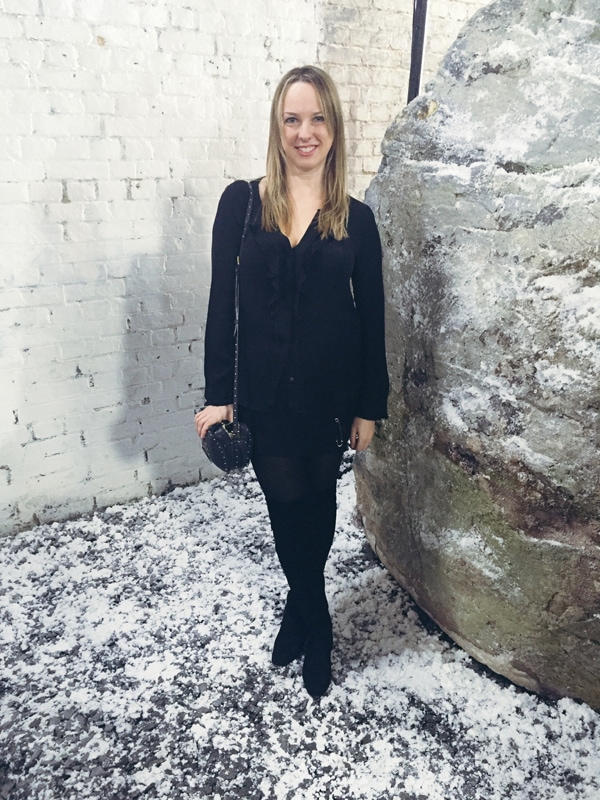 Also enjoying a morning pick-me-up were Mr Porter’s Shane Karup, StylePilot‘s Stefan Maurel, presenter Stefanie Jones of Fashion One TV and my partner in crime, Donna Ida’s Kate Gorbunova. Oh and did you spot the picture of Dermot O’Leary? The Belstaff favourite was there doing a bit of filming within the glaciers and other celebrities included Oliver Proudlock and Oliver Cheshire. Half expected to see someone leaping onto one of the racy Triumph bikes and zooming out of there – but alas everyone behaved, even despite the Blue Steel cocktails. 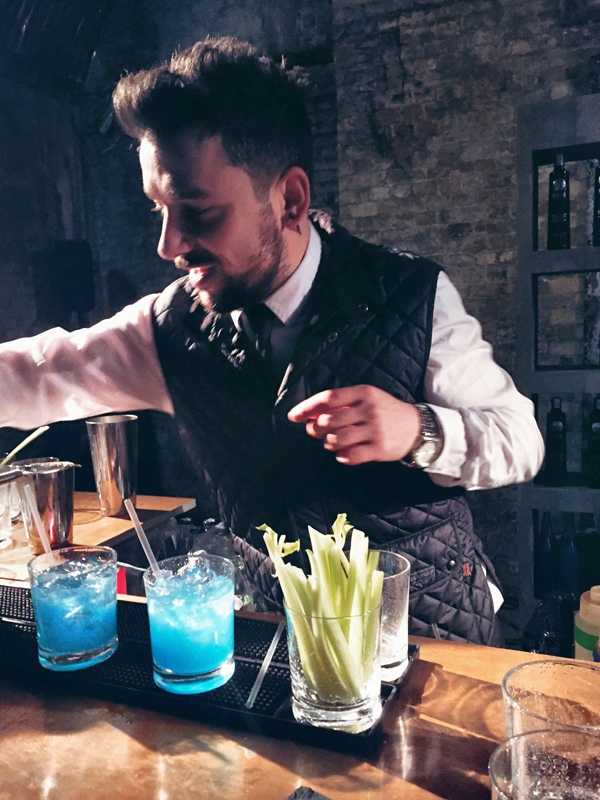 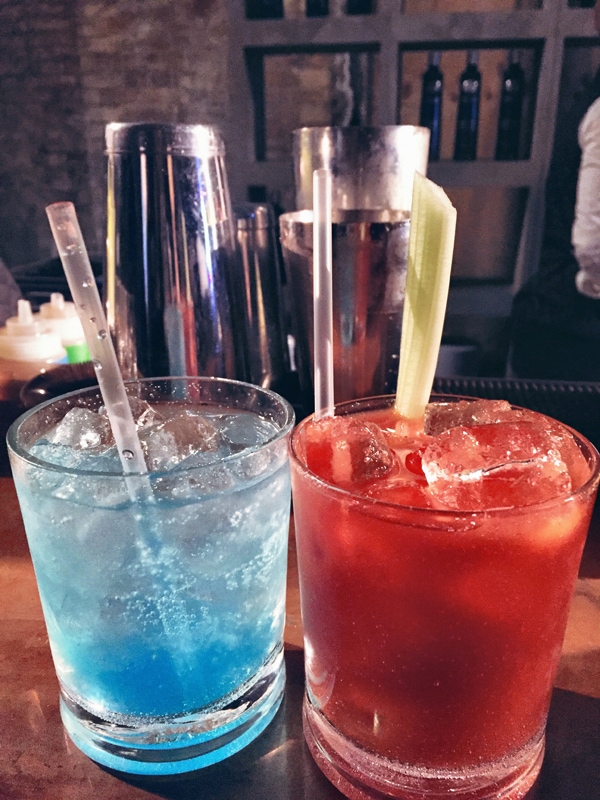 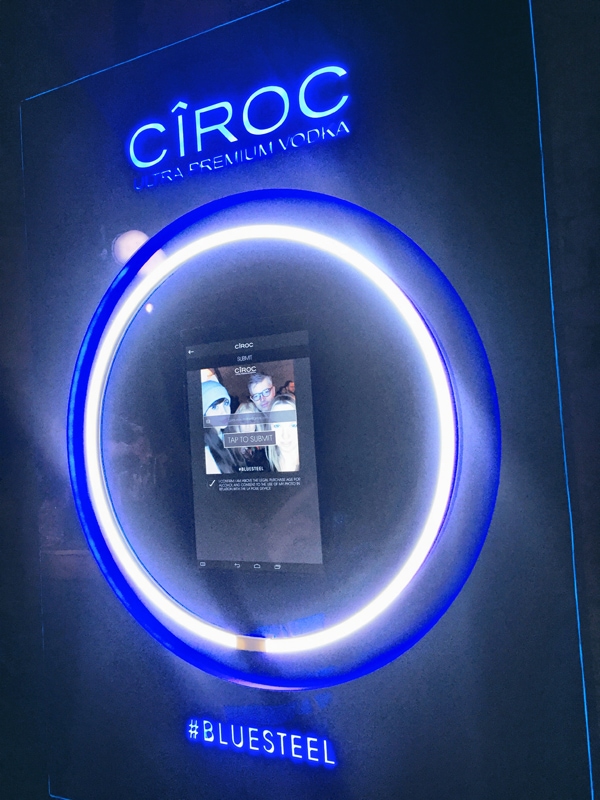 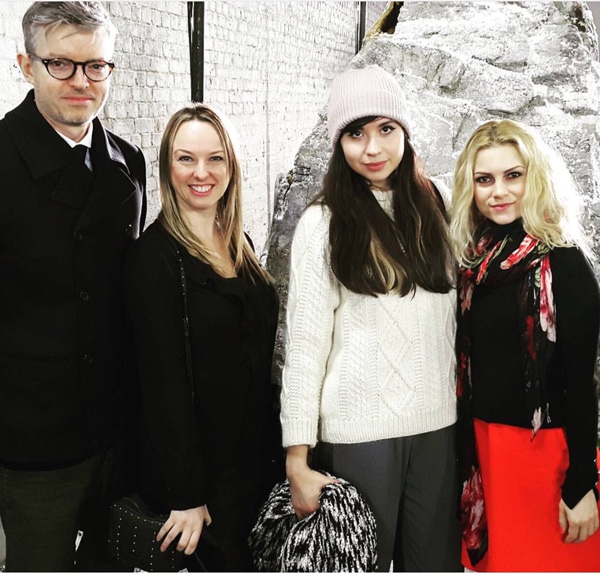