Getting Naked With Threepipe’s Jim Hawker

Think PR is all fluffy canapés and champagne? Think again my friends, because PR is a business. Jim Hawker is a serious PR guy with a witty sense of humour, for who else would have named their agency after Sherlock Holmes (think Conan Doyle rather than Benedict Cumberbatch)? Jim’s style is cool, calm and confident which makes him the ideal person to handle the stacks of high profile brands at the agency he co-founded, Threepipe PR agency. However if you were thinking of putting him into an ‘old-school-PR’ box, you are only getting half of the story. Jim’s a visionary who has seen the changing digital landscape and altered his strategy accordingly, merging with digital agency Blowfish in recent years. It’s time we turned the tables on this Sherlock loving, digital PR. Here’s my Getting Naked With interview with Threepipe’s Jim Hawker.

NakedPRGirl: How did you get into PR? When did you decide it was the career for you?

Threepipe’s Jim Hawker: I was social secretary of loads of groups at Uni and someone suggested PR as a career. Knowing nothing about PR I wrote off to loads of agencies and heard nothing back and then someone made a personal introduction to Nick Taylor, who set up Harvard PR, who offered me a job on the spot to work on their Nintendo account. Nick is now chairman of Threepipe and it’s great to still be working with him!

NakedPRGirl: Tell me about ThreePipe PR – what inspired you to start it?

Jim Hawker: The usual story that people will tell you, that they felt they could run an agency better than the people they were working for. I worked at some brilliant places and some terrible places, both in house and agency side. Moving around gave me confidence to start and build an agency – I learnt as much from bad experiences as the good ones.

NakedPRGirl: I read the ThreePipe name was inspired by Sherlock Holmes – how did that come about? As a big fan, how do you feel about the latest version of Sherlock with Benedict Cumberbatch? Do you like a modern Sherlock and a blogging Dr Watson?

Jim Hawker: I am a big Sherlock fan but more of Conan Doyle himself. A larger than life man who wore his heart on his sleeve and achieved so much – all while believing in fairies and actually not enjoying writing Sherlock Holmes stories! Yes, I think the BBC version is great – it does a good job of being true to the books, while attracting people to Sherlock who are unaware of the nuances and clever references – brilliant writing. When Sherlock was given a complex problem to solve he would call it a ‘Three pipe problem’ and smoke three pipes while contemplating the solution – it does sum up our thoughtful approach – minus the smoking.

NakedPRGirl: How hard was it to get up and running? What were the biggest hurdles?

Jim Hawker: Pretty easy – we needed a phone, some contacts and a lot of enthusiasm. Learning how to run a business was the biggest challenge and this is something we sought help from via mentors. You see a lot of PR agencies start, have some success and then implode. We were and always have been a well-managed business. Starting an agency today would be very different though, given the wide range of digital knowledge needed.

NakedPRGirl: What are your favourite PR moments since you opened?

Jim Hawker: We had a goal of winning PR Week Magazine’s Best New Agency award and we wrote a business plan to achieve it. We did win it and it was a special moment as our family was there. There have been so many highlights including launching England football kits with David Beckham but I think some of the work we did for Vodafone was incredible in helping to push their global foundation.

NakedPRGirl: What is your USP as a company?

Jim Hawker: No other ‘PR’ agency has the digital capability that we offer. Half our agency are from digital backgrounds working with data and the other half is more content and earned media expertise. Every other agency is still trying to figure out how to solve this digital challenge.

NakedPRGirl: Do you consider yourself a brand, if so how would you describe yourself?

Jim Hawker: Not really. I am very had working, ambitious person who I would like to think is decent, frank and honest.

NakedPRGirl: What is your favourite PR phrase which you use most frequently?

Jim Hawker: I use the word ‘cool’ far too much.

NakedPRGirl: Do you have a motto or a mantra that you live by?

Jim Hawker: Fail to plan, plan to fail (wife hates this as I use it at home too).

NakedPRGirl: Who are your favourite journalists/stylists or publications to work with?

NakedPRGirl: What advice would you give to someone looking to get a job in PR?

Jim Hawker: Stand out from the crowd, do something interesting and approach agencies directly.

NakedPRGirl: What is your style when you pitch to potential clients? How do you prepare for a pitch?

Jim Hawker: Direct and honest. I spent a huge amount of time preparing for pitches – I like to walk into a room knowing more about their company than they do themselves. That gives me confidence.

Jim Hawker: Google Analytics access and understanding it is the most important thing that PR people need.

Do you think it’s important to give off the right image? If so, what’s your failsafe PR outfit?

Jim Hawker: I always ask people to dress appropriately’ for meetings or at work – each and every client is different and you need to be able to judge for yourself what is the right thing to wear. I am a boring jeans and shirt kind of guy.

NakedPRGirl: You recently merged with digital agency Blowfish – has that felt like a new start for ThreePipe?

Jim Hawker: We merged two years ago and it had felt like a new start. It’s personally been great as I now learn something new every day and we are winning business which we couldn’t have won without merging. For some clients now we are effectively their marketing agency and looking after creative, paid media, website, social, eCRM as well as media relations.

NakedPRGirl: How important is the digital world in our PR future?

Jim Hawker: Crucial. Print media circulations are trending one way only. Social media is now a paid media channel. PR has always struggled with measurement and will always do so – unless it moves into a more measurable environment which is digital.

Jim Hawker: Twitter – a great way of keeping up to date with news and friends. 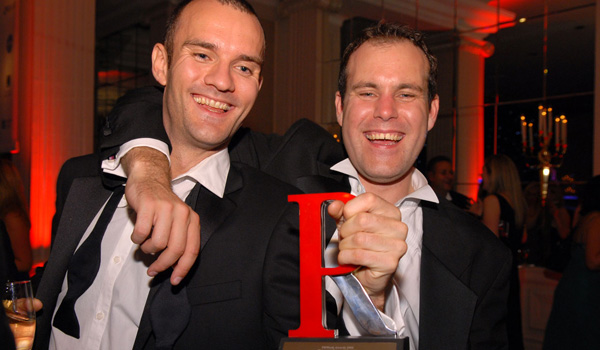 NakedPRGirl: How is your office in Covent Garden? Is it nice to be in such a buzzing and creative area?

Jim Hawker: We have always been in Covent Garden but we are considering a move next year. Clients like it because it is central and it’s also convenient for staff. There is so much buzz in east London but it still isn’t that easy to get to for lots of people, which we need to consider if we were going to move.

NakedPRGirl: PR is notoriously behind on the digital curve – do you think if we don’t embrace it we’re doomed?

Jim Hawker: Depends on what sort of timeframe. There are agencies out there doing well with a very media relations, traditional approach. Personally, I don’t think it’s the future and it’s also not the sort of work I want to do. Budgets for traditional PR are flat lining at best. The challenge being faced is by advertising, media buying and digital agencies moving into the same space as the silos continue to be eroded. PR people either need to choose between remaining a media specialist or upping their own skills and moving with the times.

NakedPRGirl: How have the changes in digital and ecommerce affected you? How did you get up to speed with the changing landscape?

Jim Hawker: Before the merger, I would have said we were doing well – we won plenty of social and digital campaign awards. Since the merger, I know now that we were way off the pace in terms of the kind of work we were doing. We are now in a very strong position. We handle digital marketing for brands including Monsoon, Reiss, Laura Ashley and Sweaty Betty and are running very innovative and integrated campaigns through search and display as well as paid social channels.

NakedPRGirl: Do you make sure your new recruits have digital knowledge?

Jim Hawker: It depends on the team we are recruiting into. For some teams we need people who have studied maths degrees who will naturally be better at analysing data. For other teams we have an internal training programme that exposes them to knowledge held within the business.

Jim Hawker: I do admire Greenpeace and most of their PR campaigns – whether it’s scaling buildings or calling out Lego on social media.

NakedPRGirl: What are your PR highs and PR lows?

Jim Hawker: Winning and losing pitches – I put my heart and soul into them.

NakedPRGirl: You’re a family man – how do you juggle work and life?

Jim Hawker: We are just about to have our first baby – ask me again in 12 months time.

NakedPRGirl: Where will you be in ten years?

Jim Hawker: I don’t know. Depends who wants me!