Beyoncé The Queen of Marketing 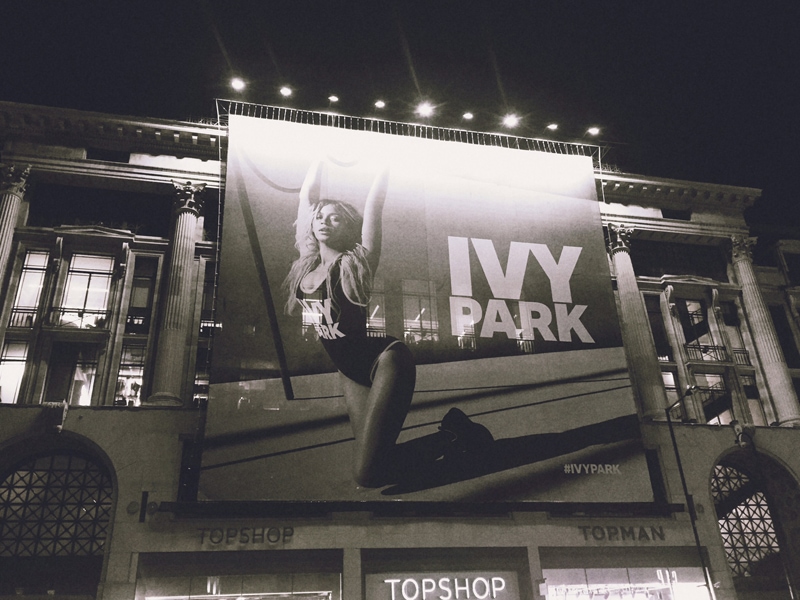 Beyoncé is a Lycra and Swarovski crystal covered marketing dream, a sparking stick of dynamite with so much business sense I think she could actually run the world – B for president? Anyway, Queen Bey has been busy in April. First she LANDED her Athleisure range Ivy Park utilising social media, and ruffling feathers by rejecting the traditional press call/party and being a no show at the launch, ooh and only going up to a size 14. Secondly she landed her new album all done and dusted with videos all packaged in and gathering headlines about her relationship with hubby Jay Z with her referrals to cheating and other women. It’s not the first time she’s done either of these things, she’s flirted with fashion lines, and she was the first person to launch visual album but she certainly gets tops marks for marketing and here’s why: 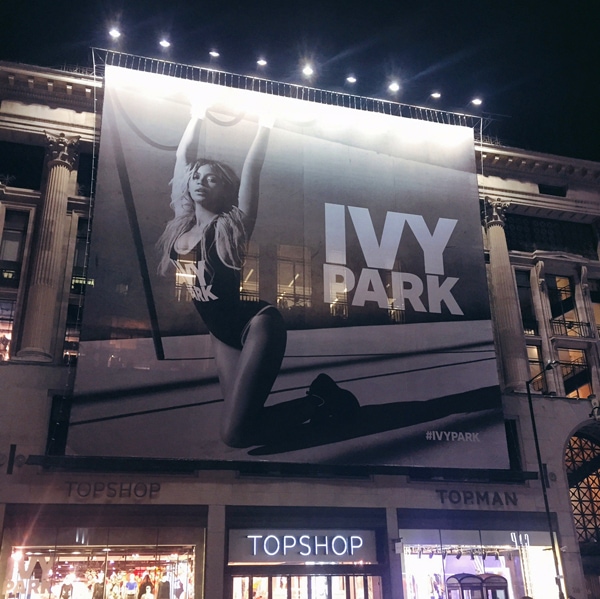 This is mainly for the clothing line but oh yah Athleisure is the new ‘clean eating’ (don’t even get me started on that one). Conscious that our affinity for sports luxe might be waning, we’ve reinvented it into Athleisure because WE KNOW YOU’RE WEARING YOUR GYM KIT WHEN YOU’RE NOT AT THE GYM. Anyway, a fancy name will make it ok. Beyoncé has jumped on the trend at just the right time and owned it with high street friendly prices. Hell, I know the game and even I ended up in Topshop on Oxford Street in London spending £90 on Ivy Park celebrity nonsense which I love – GUILTY PLEASURE PEOPLE. We all know the lure of a celebrity collaboration, I bet you have a piece of Alexa Chung for Marks and Spencer in a bag under your desk! Let’s face it, we wanna be in their gang.

She creates her own headlines by launching it herself on her own Vevo/YouTube and social media which leaves media channels scrambling to catch up. I’ve seen about a zillion posts on these two launches – the drip drip drip feed of information from Ivy Park to the full throttle launch of Lemonade. Stacks of content = plenty to talk about, eg her hair, her outfits, the album song by song, the clothes piece by piece. And it’s all original, it’s all her own, it’s how she wants to be perceived so she can control her image perfectly – top marketing marks. And she’s launching on Instagram where her young fashion audience are hanging out!

Beyoncé knows her audience; she knows it is mainly women looking for power anthems to dance to on a Saturday night, looking to make the right decision, find love, be independent, being cheated on. Even back in the day she was talking about ‘Bills, Bills, Bills’ with Destiny’s Child, being a ‘Survivor’ after a break up, all the women who ‘Independent’ throw your hands up at me, who ‘Run the World? Girls’, ‘All the Single Ladies’…despite all the talk of Beyonce’s marriage problems (and it has taken many a Grazia front cover) she keeps one eye on the prize and creates songs for them. Yes proving you can be married while dancing in a leotard chanting ‘oh oh ohhhh if you like it then you shoulda put a ring on it.’ So whether her marriage is on the rocks or sailing happily on the ocean, there’s enough little stories in there to keep Daily Mail trying to work out who ‘Becky with the good hair’ is.

Beyoncé has allegedly reduced personal appearances which makes her more mysterious and us more intrigued. She’s always kept her private life hidden under lock and key…for such a long time we weren’t sure what the real story was with Jay Z, and it they were engaged/married/divorced and so on. Yet somehow she’s still approachable, since we’ve seen her get married, break up, fall in love all in her music videos. For someone so uber public somehow she keeps enough back to keep the story rolling.

Supporters, fans, customers, call them what you will, having cultivated a loyal fan base, Beyoncé now knows that they will follow and support her every move. This mega following means that Beyoncé can self-publish and it is not just the media that are listening. It means that fans hear first, she can have direct contact with the people who are buying her clothes and her music. And that’s what leads to the big bucks.

I mean, let’s not forget she writes, sings and performs some songs too 😉 In modern marketing, Beyoncé is a phenomenon who uses digital and social media to a global advantage. We should all be taking notes.