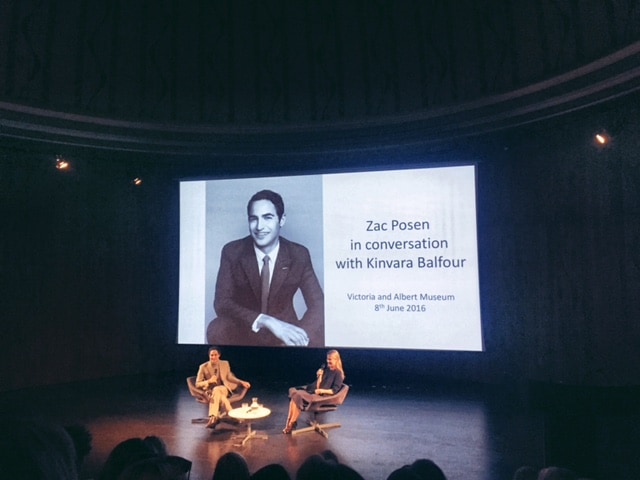 All I could think about on my way to see Kinvara Balfour interview Zac Posen was Claire Danes’ stunning light up dress on the red carpet at the 2016 Met Gala. The theme for this year was Manus x Machina: Fashion in the Age of Technology in association with Vogue and the standout (by miles and miles) was Zac Posen’s divine Disney inspired Cinderella dress which took on a magical and ethereal quality by glowing in the dark thanks to LED technology.

So shall we start there? I think it would be wrong to start anywhere other than THE fantasy frock of the decade. “I thought I’d have more competition!” Zac jokes about the dress and you can understand what he means. The reason why this was such a success was the fact that it made everyone else on the red carpet look like they literally got dressed in the dark with Claire’s fairy-tale gown adding drama and elegance WITH technological elements but STILL remaining wearable and desirable. It was Anna Wintour herself who wanted Zac to dress Claire Danes (and what she says goes right?) although they are firm friends in real life and have been for years.

To start researching how to do the dress, Zac went to a surprisingly advanced source. “I Googled,” he admits with a laugh before going on to explain. “This was fibre optic and I knew what I wanted to make as I’d draped it before. For a moment I wasn’t sure it was going to be as Princessy as I wanted but when I knew Claire was my date it would work. It was modern and the under structure was hollow with a little hoop skirt and a box around the bottom with a battery pack.”

The dress also had a real life element of fairy-tale style drama. “Claire had ten hours of battery pack and we tested it,” Zac revealed. “But I still worried, what if her left hip is out or her right boob went out?” As Kinvara noted, this makes for a real life modern day Cinderella who has to get home before her battery pack runs out (ok ok so not quite as romantic!) But it translated off the red carpet and back into digital with ShopStyle confirming that searches for Zac Posen has increased 20% in the three days after the Met Gala.

So, well I’m entranced, and all this from a man who started off in life wanting to be a baker or a performer before starting to sketch clothes when he was young. “The creative process was always supported and revered in my household,” he shares and his own fairy-tale fashion story started when he moved to London aged 18 to start at Central St Martin’s where London was ‘absolutely instrumental’ in his career.”

“I never expected to leave London,” Zac admits. “I must have had a lot of energy! My parents thought I was on drugs here because I was always buying expensive fabric and coffee and so on.” Yet life at St Martin’s wasn’t easy, for one it was a different time; ‘pre internet’ so if you were really interested in fashion you had to really research it. “I had my life at St Martin’s but at the time I don’t think I enjoyed it that much. It was preparatory for fashion though with how cruel it can be,” he explained. “You had to compete for space at this school, you couldn’t leave your stuff in a locker as someone would take it.”

He excelled and met a role call of famous names as they were on the rise including Karen Elson, Erin O’Connor and his first ‘girl crush’ Iris Palmer plus enjoyed the support of Isabella Blow. “I met them working on fashion shows and I was going out a lot. It wasn’t targeted I was just drawn to these inspiring women. It was at a time when women were allowed to be themselves. I was drawn to that romantic notion. ” He also recalls assisting Alexander McQueen and John Galliano whose fashion was based on ‘deep theatricality’ and remembers going to lunch with Galliano’s team and being ‘terrified’.

These days he’s a hard worker producing 16 collections each year and admitting he has equal interest in art and business. “The business supports my creativity,” Zac admits. “I am very respectful of people who just want to be an artist but you have to adjust your expectations as it won’t take off to a big brand. You have to think of the big picture and the plan has to be as creative as the clothing you’re making. There’s profit and there’s loss and there’s margin. The whole process is important and it’s a screwy business. Not everyone is ready to be the face of a company either because you need a great deal of resilience. You must have the ability to sing and dance be a performer.”

So to time management, and anyone who runs a business or is multi tasking take note. “There’s a lot of discipline, this is a long distance race,” Zac says. “You have to be able to delegate, trust people and know when your hand and eye comes into it. It has taken a lifetime to get that balance as I am by nature a hands on control freak.”

And on that note, I’ll just finish on the PR front, because it seems to me that Zac, whether he realises it or not has great instincts for a story from utilising his famous friends at his launches getting Puff Daddy/P Diddy on board as an investor to knowing how to deal with the press when they finally come knocking. “The press had started,” Zac begins. “Opportunity is not a lengthy visitor so we just ran with it and The New York Times did a huge piece on me.” Even today, he gives out great advice to an audience member who is an aspiring designer. “PR and social media are helpful it’s not the only way. I think word of mouth is important. You need to be wearing what you made, everyday, as you are your own best advertising.” There you go, just a little snap shot into the life of this business man, creator, dreamer and tech savvy forward thinker.

Zac Posen was interviewed by Kinvara Balfour at the V&A.

Meetings at #ONMotcomb @onmotcomb in advance of my talk tmrw at the V&A with my friend #ZacPosen @zacposen (everyone welcome! Tickets at shop.vam.ac.uk). To wear his dresses is to understand his incredible craftsmanship

Note – this post contains some affiliate links so if you purchase the book below I receive a small percentage of the sale. My reviews are always open & honest.