In PR and marketing terms, underwear is dynamite. It can make you thin, get you laid, define your abs, give you a bigger butt, enhance your cleavage, say ‘hello boys’, impress the girls, you know the drill. As I talked about in my blog ‘Who Sells You Your Pants‘ the dream is never far away when it comes to the marketing of your smalls which is why I was first in the queue when the V&A opened their latest exhibition in London called Undressed – A Brief History of Underwear sponsored by luxury lingerie specialist Agent Provocateur and make up brand Revlon. Ohhh la la. 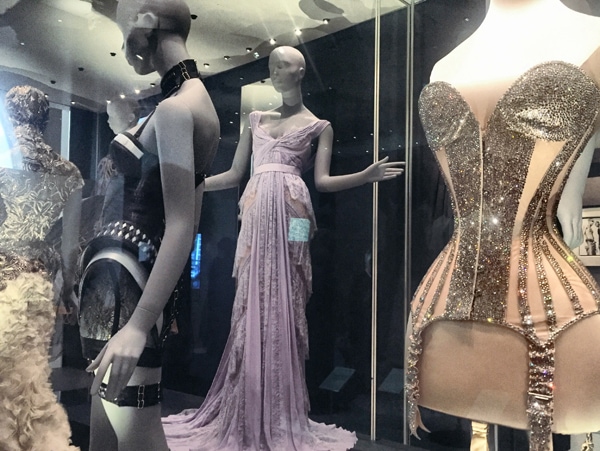 Man pants have gone from long johns to budgie smugglers,  through weird, wonderful twists and turns along the way. Take Chukka the disposable pants promoted in the media as a ‘convenient choice especially for travel and holidays’ (1969 – seriously how did those not take off?), the mesh pants, the pink Disney printed briefs (1964), the jock strap (1887 introduced initially for male cyclists) and even a Vivienne Westwood pair of leggings with a metallic leaf strategically placed. 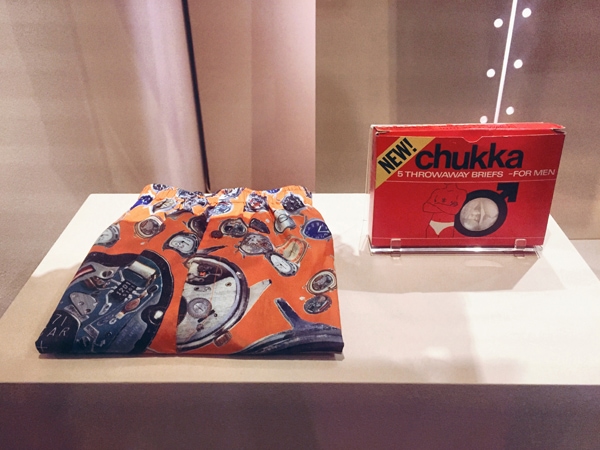 For items you’ll be more familiar with, there’s also the Y Fronts (1990s), true aussiebum ‘Wonderjock’ briefs (2001) designed to lift and enhance the package, David Beckham in his H&M shape wear (2012) that ‘made it acceptable for hetrosexual men to take an interest in underwear.’

In contrast to today’s more liberal attitudes, nudity was once avoided completely and even the statue of Achilles in Hyde Park had a special plaster cast fig leaf (1882) added to avoid his…you know what. There’d be no Rick Owens liberal sans pants naked catwalks in the 19th century, put it that way. 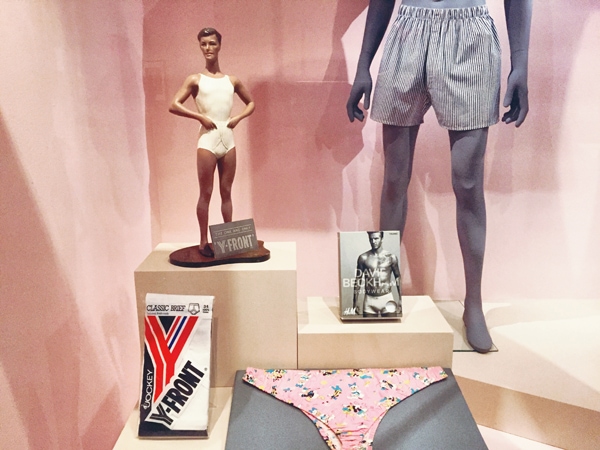 As V&A’s curator Edwina Ehrman says the exhibition is a journey through time that represents ‘cultural, economic and social change.’ Underwear is indicative of our society and it is the way that women’s underwear morphs to mirror those changes fascinates me. 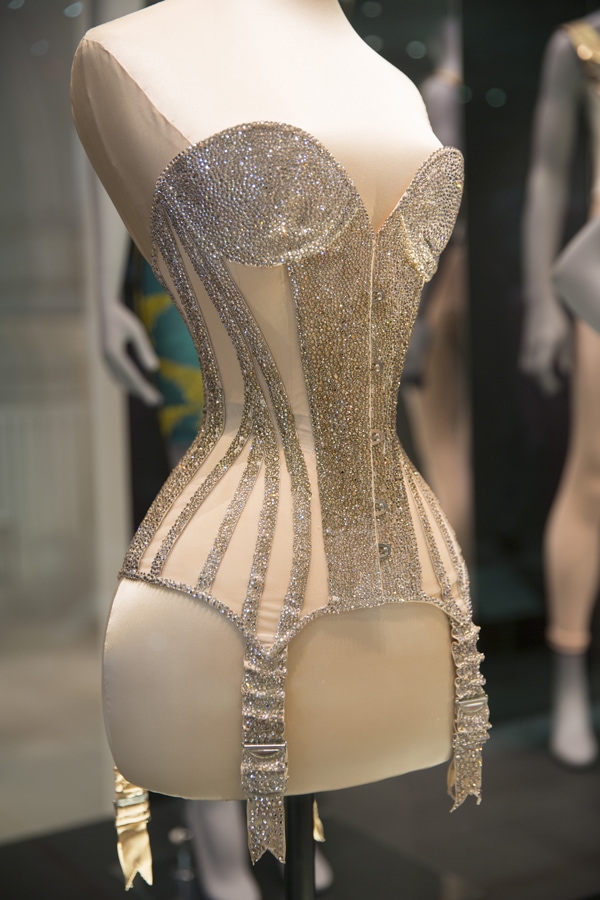 Women were squished into corsets for longer than necessary, so it is a wonder why we are in such a rush to be cinched back into them, as tellingly the smallest corset on show is Mr Pearl’s Swarovski crystal covered number for Dita Von Tesse at a miniscule 18 inches (2011 pictured above). There is even a handy x-ray that demonstrates what corsets do to the rib cage ouch – and guess what, it ain’t good. 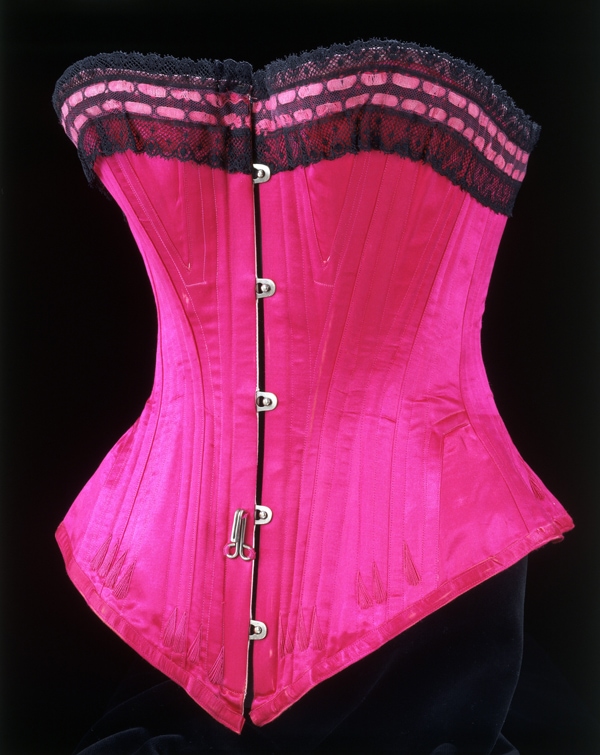 So we have been obsessed with shape and gone from complex shifts, stays and hoops (18th century), whalebone, wood and bone busks, bustles and petticoats adding volume with the fullest skirts (1840s) and cage crimoline (1856) until things start to become lighter, easier to wash and are for as women became increasingly active especially in sport in the 19th century – the Cyclist Corset pictured below – go girls! 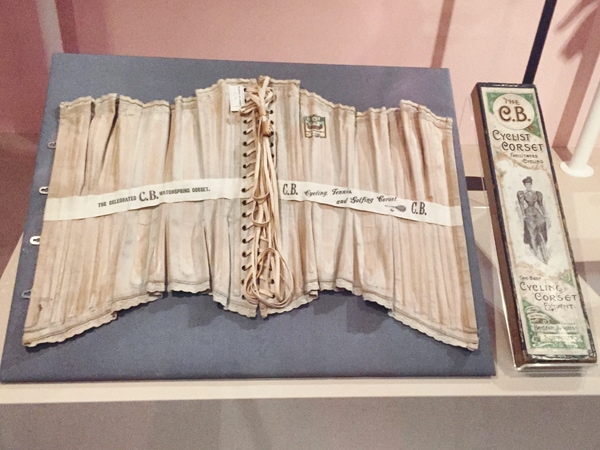 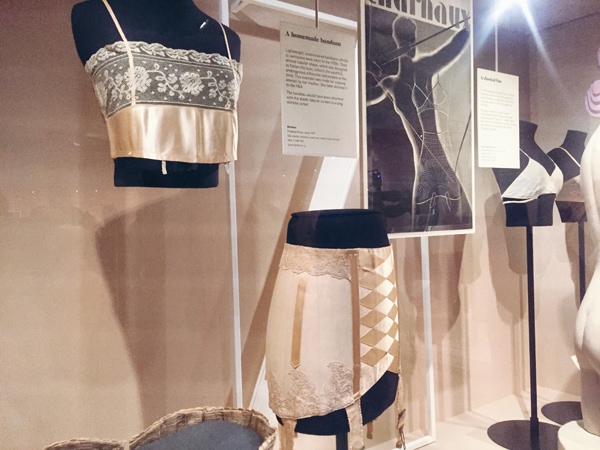 Shape is still top of the wishlist in the 20th century to create the desired image with The Spirella Corset (1913) a ‘bust extender’ for those ‘too thin or scant in the chest department,’ The Peter Pan ‘Hidden Treasure Bra (1950) created by Henry Plehn who compared the engineering time of his conical shaped bra to that of the skill and effort required to build a steel and concrete bridge and most recently the Gossard Ultrabra plunge (1994) which started the famous bra wars. 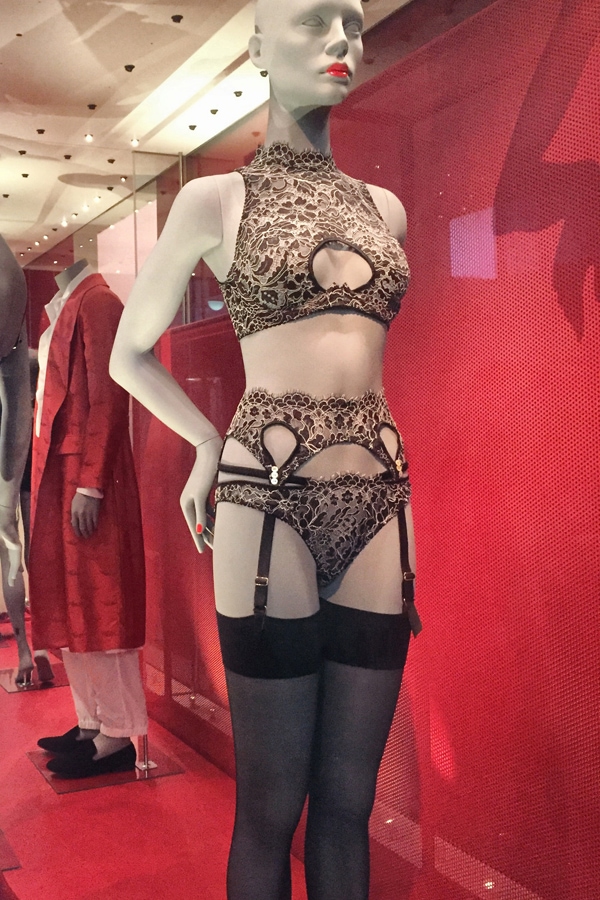 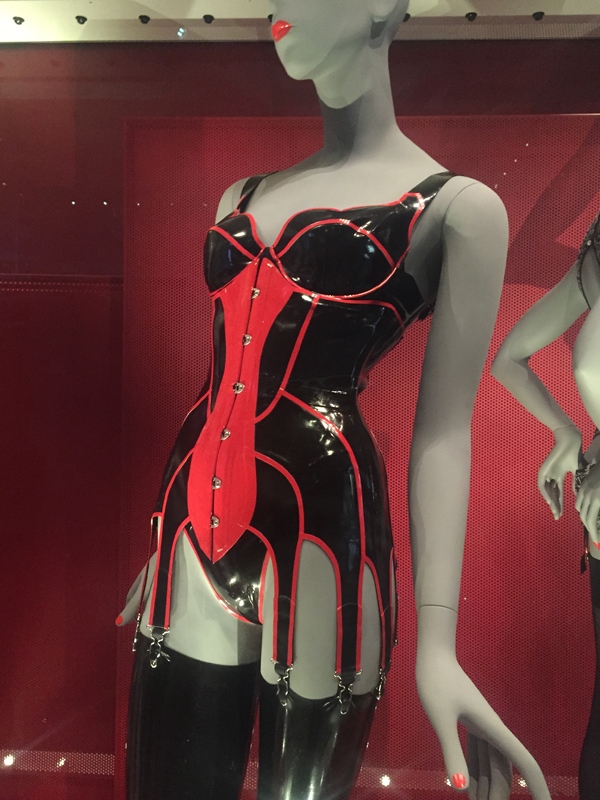 In the 1960s going without a bra was a political statement, probably not unlike the modern day #freethenipple movement. In contrast, we have those the opposite, the razzle dazzle of Agent Provocateur (above top), rubber corsets from House of Harlot (1991), bondage from Bordelle (2015), underwear as outerwear with Gwyneth Paltrow’s Antonio Berardi Trompe L’eil dress (2009), branded ‘borrowed from the boys’ esque Calvin Klein celebrity pants (1983). 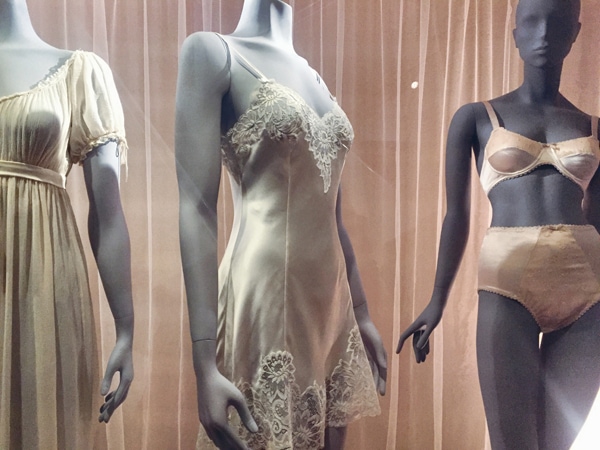 Janet Reger launched her lingerie business in 1967. It was attacked by others including writer Angela Carter for objectifying and demeaning women. Undressed Exhibition c Victoria and Albert Museum London 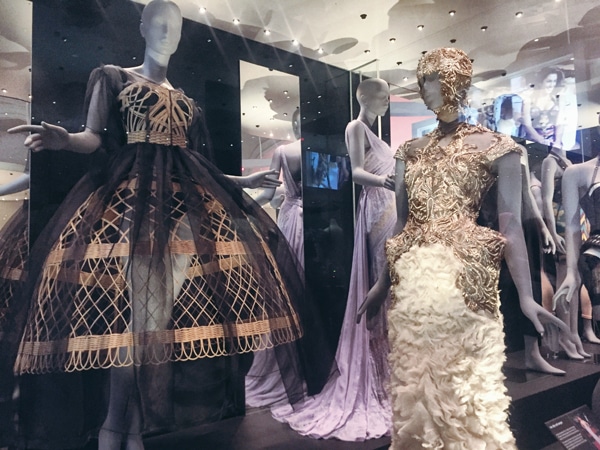 You only have to look at the modern age with nearly naked dresses on the red carpet and a casual penis on the catwalk to know that provocation still intrigues and sells. So whether you are after a slinky shift to turn you into Kate Moss or looking for cleavage enhancing Victoria’s Secret bras for the girls, or you’re selecting some enhancing shapewear for the boys, we’re all trying to morph our bodies to the latest fashion trend and make the best of what we’ve got. Underwear has always been created and sold as a product that can solve your problems, but also to sell a dream that can turn everyday items into magic pieces designed to give you that perfect shape that you desire. 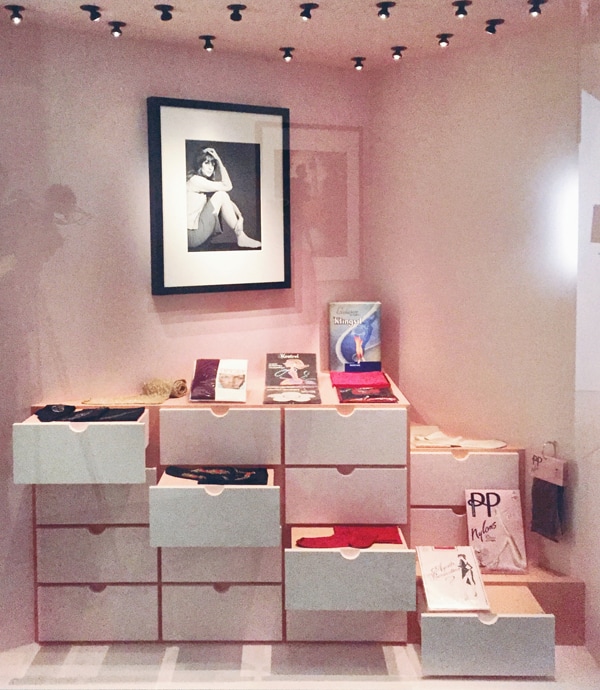 Undressed: A Brief History of Underwear is at the V&A Museum until 12th March 2017 curated by Edwina Ehrman, Curator of Textiles and Fashion at the V&A. Tickets are £12 and booking is advised. Sponsored by Agent Provocateur & Revlon. There’s also a host of interesting talks including Crinoline on 27th April 2016, Antona Berardi on 3rd June 2016, a weekend course on the Concise History of Underwear 4th- 5th June 2016, Lunchtme Lecture from Bustles to Boxers 11th May 2016, Up Close Event on 16th September and an Introduction to Corsetery on 1st and 2nd October 2016.