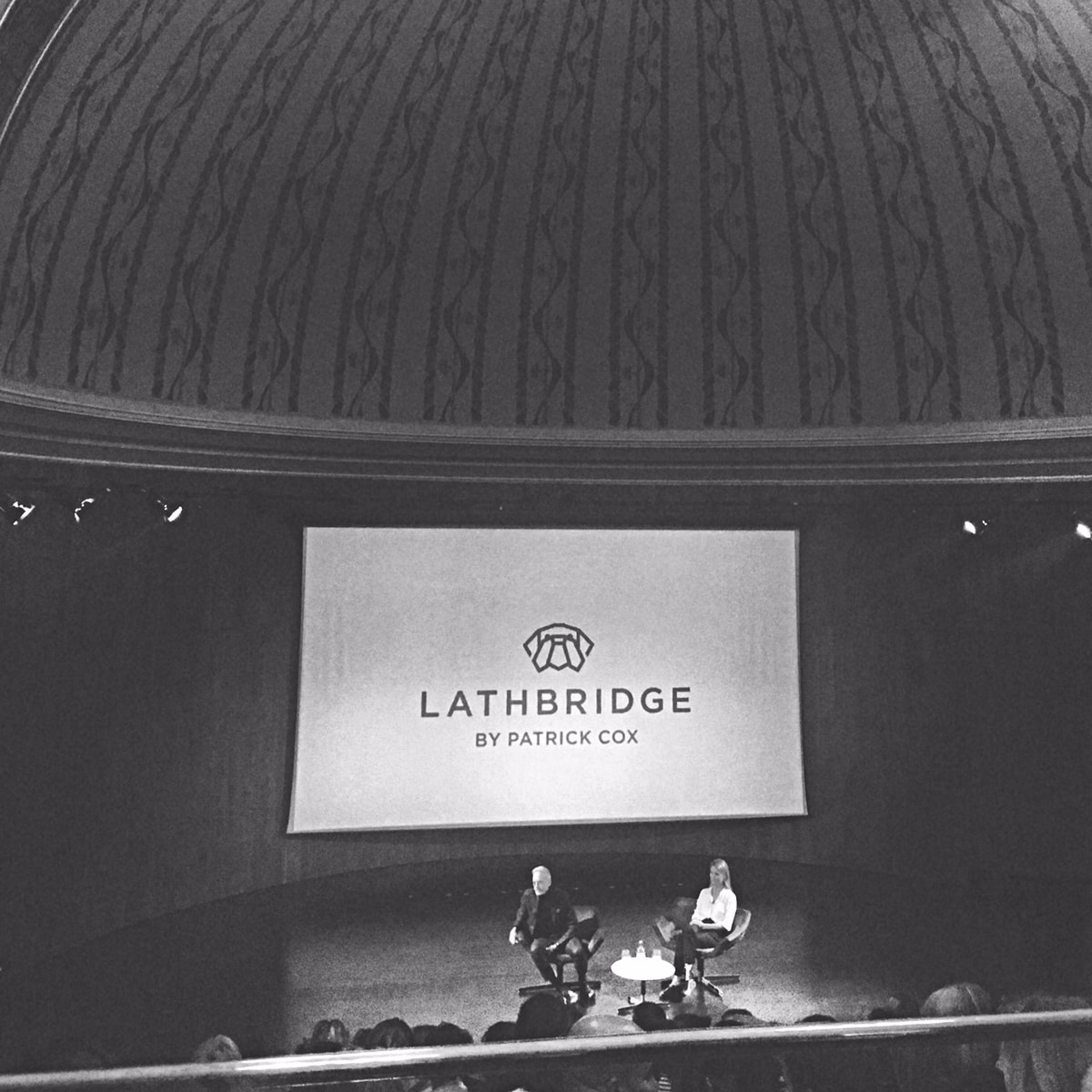 On Tuesday this week the fash pack (including one Liz Hurley in an incredible Amanda Wakeley black dress) descended on the V&A to see legendary shoe maker Patrick Cox being interviewed by Kinvara Balfour. You know how much I love Kinvara from her Getting Naked With interview and from her on-point In Conversation series with Apple (the next one is tonight with Vogue’s Alexandra Shulman no less). I also love the V&A (who doesn’t?) after seeing the Horst and Alexander McQueen exhibition.  I had intended on a more lengthily post on Patrick’s story and how he now comes to be launching his new brand Lathbridge (his middle name), but it was a little too dark to write stacks of notes on paper and the glow of an iPhone seemed a little incongruous against the moody backdrop. 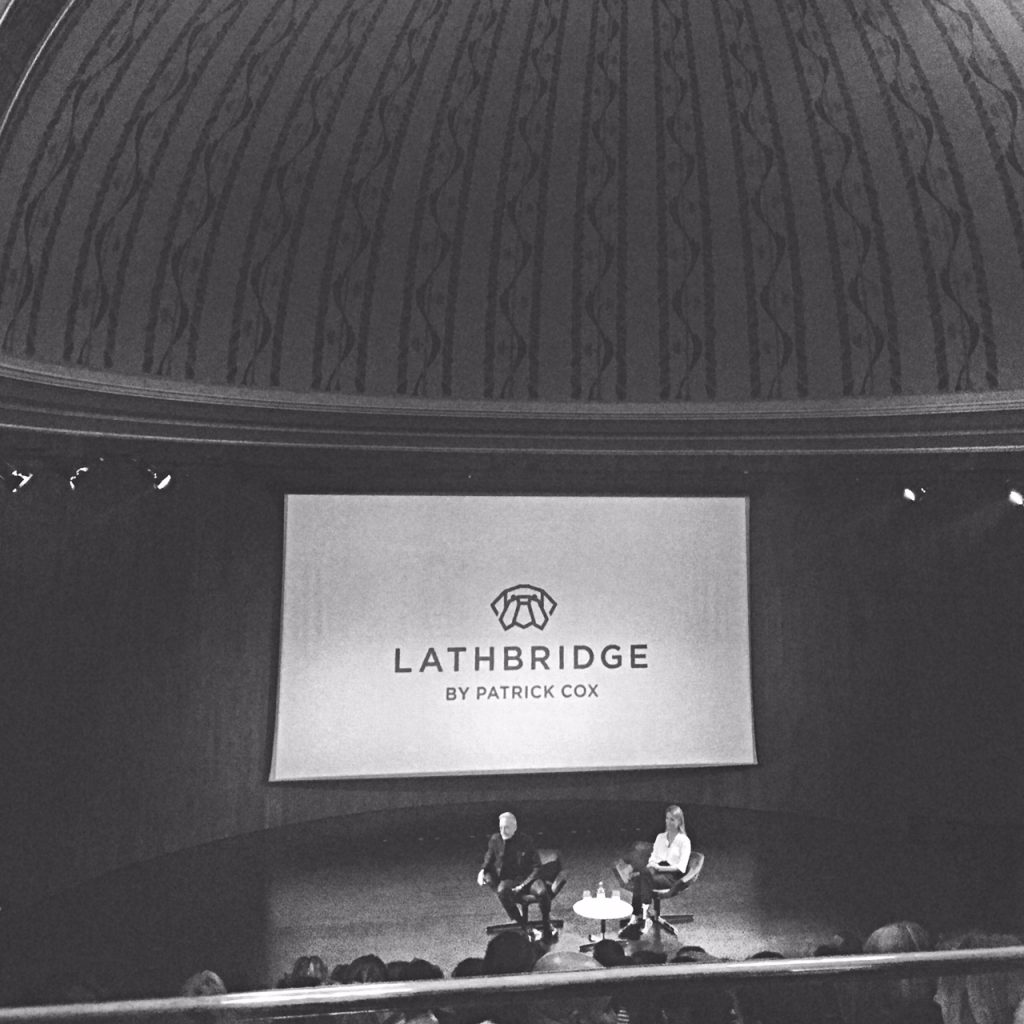 So what can I tell you about him? He’s a realist – God a man I can get on board with! He says; “The word genius is overused in our industry. It’s a fricking shoe, it’s a fricking dress. Get over it.” Touché my friend. He is also a Canadian who decamped to London to study but clearly is very at home here. “My mum said ‘Why you moving to London? It’s old and dirty.’ And I said those are exactly the reasons I’m going.”

Suffice to say his journey is interesting from a lucky break in a club bathroom which led to shoes on Vivienne Westwood’s catwalk and thus a successful shoe brand was built on pretty solid values (famously he noted that he asked Madonna to pay for her shoes because she could afford it!) But alas the course of fashion ne’er does run smooth and before long investors arrived and game changing competition (Tamara Mellon swooping off to the Oscars to gift every star around with Jimmy Choo) so Patrick left his eponymous brand. He readily admits that there was never a marketing plan, that he turned down the Spice Girls for not being on-brand…and that gifting as it exists today wasn’t even around yet!

Since then he had a break and started a cake shop – seriously – called Cox Cookies and Cake before being drawn back to the shoe world. His new venture is aimed at mainly men with a bit of a women’s offering. Men will get the full treatment eventually with a full lifestyle brand. 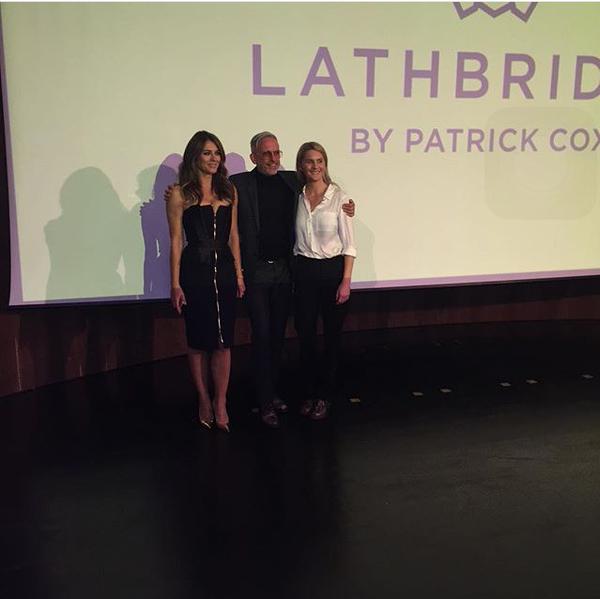 What were the key takeaways? Cox urges; “Be true to yourself. Find your niche and repeat it. Get good at sound bites. Learn a second language. Learn Italian if you want to work in luxury shoes. Pay attention to the finance; it’s a business, it’s not an art.”

I feel like that cool piece of practical advice should be written on the cover of every notepad of any aspiring designer. Listen to someone who’s been there and while you’re at it, keep an eye on how they grow the new brand.

On a separate note, Liz Hurley’s incredible black dress leads me to another amazing designer as she also attended Amanda Wakeley’s 25th Anniversary dinner after the talk. Congratulations to Amanda for this incredible achievement and make sure you check out their campaign on the Amanda Wakeley website.