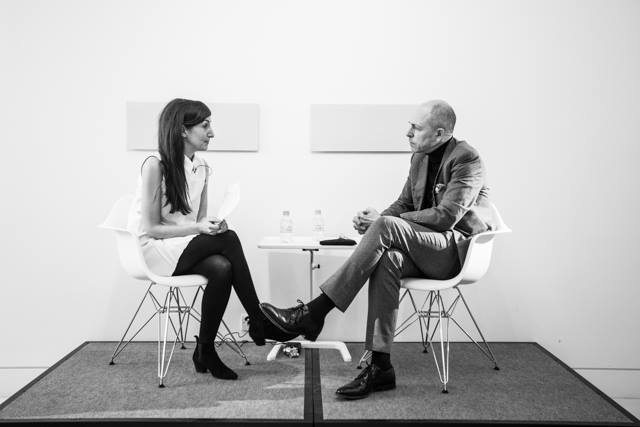 I wasn’t sure what to expect of Dylan Jones. But to be blunt (as he can be) it was a joy, especially if you enjoy a little dry humour as I do. I wrote about GQ not long ago in ‘Where Have All The Men Gone‘ after the GQ Awards were photo bombed by Kim Kardashian. Yet men are continuing to go from strength to strength as Jones asserts; “It was hard to put a man on the cover ten years ago.” Now they dominate the majority of GQ front covers. There certainly has been a shift and the men’s market is particularly interesting as there is much to play for with the explosion of social media and the evolution of digital. Alongside his day job he also is the Chairman of London Collection: Men – and as it happens they have celebrated very successful AW15 shows in January. ‘Here are 10 things from Dylan Jones as interviewed by Fashion Monitor’s Sarah Penny for The Industry at Condé Nast College. The audience as ever was full of fashion’s finest from Jean Queen Donna Ida Thornton to super bloggers Navaz Batliwalla (Disneyrollergirl) and Ella Catliff (La Petite Anglaise).

As Brad Pitt says to Matt Damon in Ocean’s 11 – “Don’t use seven words when four will do.” Dylan Jones answered all the questions put to him by The Industry audience but he definitely didn’t fall into a trap of saying too much. He was asked a particularly stinging question by The Times which was did he regret naming Tony Blair the Philanthropist Of The Year at the GQ Men Of The Year Awards upon hearing the infamous story of how Damian McBride (Gordon Brown’s press advisor) rescued Tony Blair’s GQ Politician of the Year from September 2003 from the skip at Number 10? Tough one, yes? ‘He simply answered, “We’d actually heard that story before we offered him the award.” And that was it. No fluffing people, no fluffing. How refreshing. On the political hot potato of Page 3 – “I don’t have an opinion. I don’t find it offensive. If you buy The Sun you probably expect that. “I’m not sure what the huge cross over with GQ and The Sun is.” When a lady in the audience ventured, “You could do a survey with your readers?” He shot back simply with; “If you advertise I’ll do a survey.” 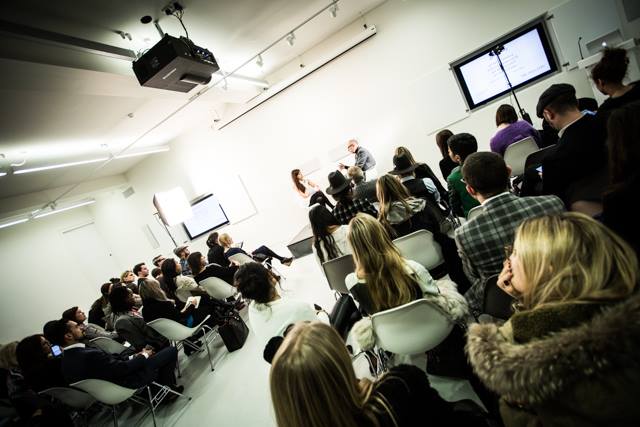 2) ‘Work harder than you ever thought you’d work, you just have to work insanely hard, and you need to be lucky.’

‘Jones, with his trademark humour has been editing GQ “since God was a boy”’ but it was a touch of luck that led him there. He studied at Chelsea School of Arts and then St Martins which he left in 1981 thinking he wanted to be a photographer, and was as he asserts in his trademark self depracting style “I was a dreadful photographer” but one day a friend, Mark Bailey was photographing for i-D Magazine and asked him to go along to write it up. After that he was offered a job. “It was literally as simple as that. As soon as I got into it I realised I didn’t want to do anything else. Work harder than you ever thought you’d work, you just have to work insanely hard, and you need to be lucky. I was very lucky at a very young age.” 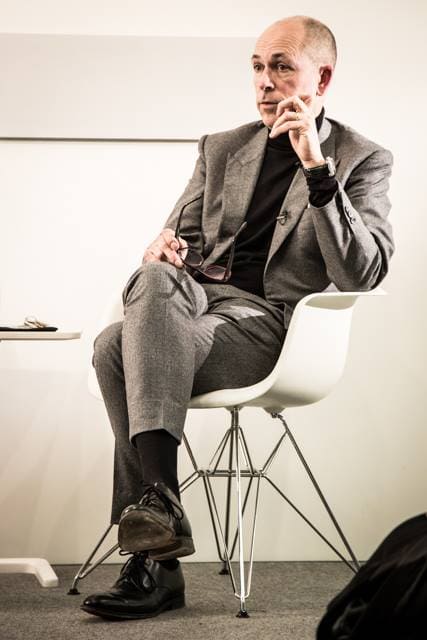 3) Media is a business

Yes I know it’s like a secret hidden away in media but Jones was very open about the business side of running GQ. He revealed; “Along with Vogue we’ll be the first Conde Nast publications to go into ecommerce”, following in the footsteps of Bauer with their Grazia Shop platform. It’s such a tasty world out there, publications looking to increase revenue streams by adding ecommerce and ecommerce platforms adding content to boost interaction and transactions from customers. When asked about advertising he said; “We’re a business and there will always be a dynamic between advertisers and editorial but it can’t be mathematical.” 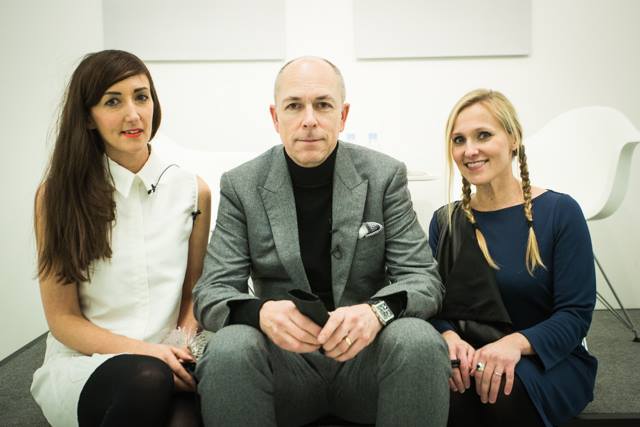 As much as we think everyone else took to digital like a duck to water, it simply isn’t true. “Initially like a lot of people we made a lot of mistakes because I think the tendency is you just think we’ve got this amazing thing here and we’ll just put it on digital. But it doesn’t work like that.” Indeed it doesn’t, and for anyone just making their first steps into content creation or any kind of marketing, Jones’ words of wisdom will ring very true; “I thought it was going to be really difficult for us because a) we’re late and b) I wasn’t convinced we’d do a good job and c) I thought it would kill the team. And actually you just have to try and protect your brand and make material that is suitable to that type of media.” It isn’t as easy as you think, it takes time, planning and getting to know your media platforms and your audience.” There’s such a lot of noise about digital. Bull shit – just because you own a smart phone doesn’t mean you’re any good at it. Just means you own a smart phone.” True, Dylan Jones, very true. 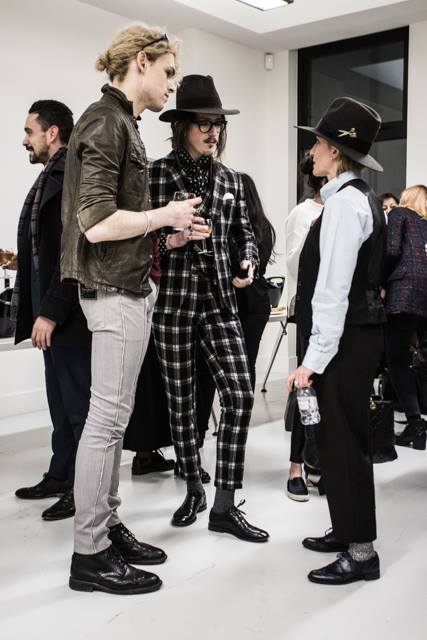 Good journalism is something Jones is very passionate about and what appears to have made the crucial difference in making GQ magazine stand out from their competitors. “When I inherited the magazine it was already incredibly successful, it was the yuppy bible. It was renowned for teaching a certain type of man how to dress well. And what I thought is if I could bring anything to this proposition it was good journalism. And that’s what we did we brought really good journalists to the magazine. It became our DNA and our USP.” It has flourished of course, in stark contrast to magazines like Nuts which have closed down. “They took the men’s market and turned it into something else, something mass market,” Jones commented. “When that happened the only button they had to press was sex and that coincided with digital.” It just goes to show that quality content in any format is engaging and enduring whereas cheap thrills (so to speak) just can’t sustain growth (all puns intended.) 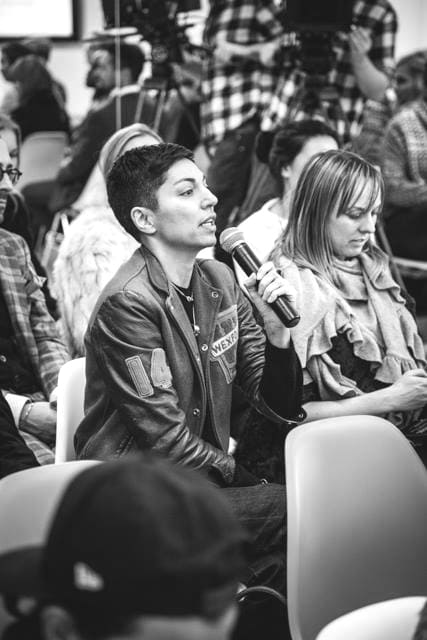 What? Actually stop, as in take a break? Yikes! Well, let me explain. As Chairman of London Collections Men working alongside Caroline Rush, Jones has seen huge success but he notes that in season three he asserted, “We shouldn’t really market this or spin it and that’s when the quantum leap was.” A change of direction and pretty risky, but it paid off. And just goes to show a total 180 degree change or considering something totally against the grain is well worth it, especially in the fashion game where the regimented seasons and collections can become routine. He had a few tongue in cheek comments about the fashion industry that “If you decide to show in Milan you’re showing in the most boring city in the world” before adding “I’m being flippant.” He champions the British industry though pointing out the incredible heritage of Saville Row and the organised nature of the Brits: “None of this fannying around and being 40 minutes late.” 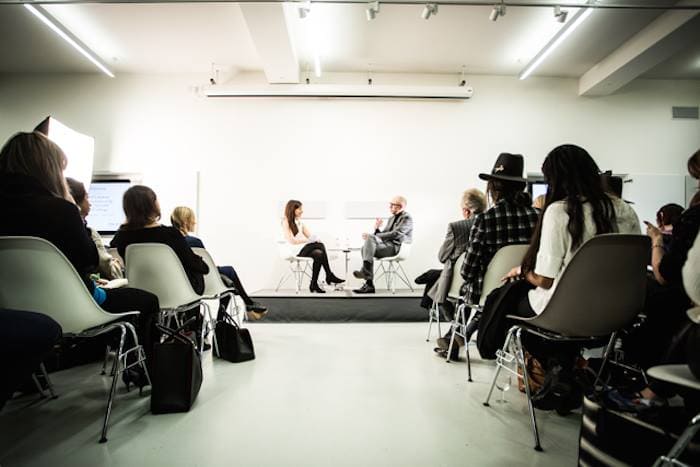 Question Time for Dylan Jones at The Industry London

Menswear has never been so sexy with David Gandy in his sharp suit at LC:M, shows like Pitti Uomo upping the Instagram ante and they’re also garnering more headlines than ever – thanks to the infamous penis-gate at Rick Owen’s show in Paris. Jones notes that “The growth in menswear coincided with the economic slump, plus it’s a generation shift. The people in this room have no qualms about menswear but twenty years ago it was different.” However, as much as it is growing, it is not quite on the same page as women’s fashion just yet, and what Jones really wants is to see British menswear recognised globally. “I would love international brands to come to show because it’s more fun to show in London. ‘From a profile and commercial sense I don’t see any reason why men’s fashion shouldn’t be as big as women’s fashion.” Pockets of resistance probably stem from the readers themselves. “In terms of coverage the Daily Telegraph always wants to put girls on the cover. There’s still a little resistance to covering men’s,” Jones says which perhaps points to the fact that their are better sales or more clicks on women, such is our obsession with gazing on women. And to Selfridges new plan to blur the gender lines and introduce a unisex fashion floor – does he think that’s detrimental to men’s fashion? “Not really. In men’s fashion there’s great tie ups including art galleries and department stores and it helps in getting business to have understanding of men’s fashion.” 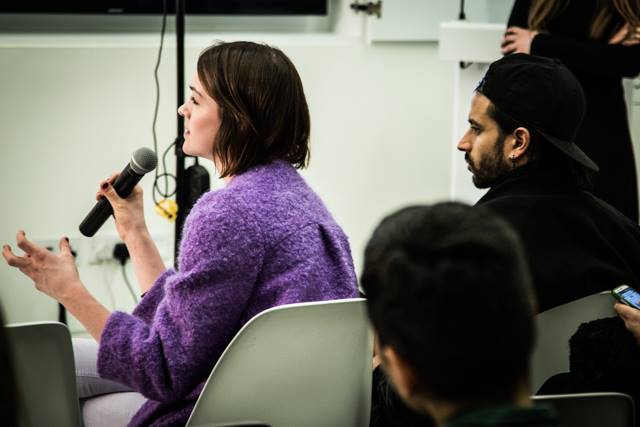 8) Still a future for print
It was fashion blogger Ella Catliff of La Petite Anglaise that asked if GQ was creating different content on the website to the magazine, whether that meant essentially different readers. The answer was a numbers game as so many more people have access to the digital platform. “Our uniques are 1.3 million. 110,000 buy the magazine.” Jones remarked. “I wish 1.3 million bought the magazine.” The generation difference is also something he was acutely aware of. “My teenage daughters aren’t going to wake up and say what’s missing from their life is a hard copy of the Guardian.” he joked. “But you can’t get away from glossy magazines because they’re by nature glossy and colourful.” Print will always exist but what Jones is talking about is creating different content for each which treats each medium separately – but both upholding the ethics and integrity of the brand. 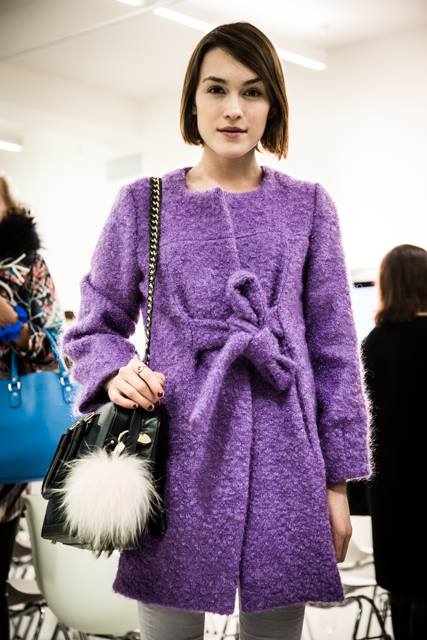 9) Social media is brilliant.
Jones has been receiving advice though, from his daughters, who have given him a list of things on Instagram that he shouldn’t do. He may be getting an education on the cool factor, yet he has a keen understanding of how its playing out in the fashion world. “I think social, it’s a crass thing to say but it’s made this industry and all industries more egalitarian.” He notes the impact on the fashion status quo as we know it. “Social media puts everyone on the same level and possibly questions why some people have fashion shows.” He looks to the first season Tom Ford allowed people in to take pictures. “I can’t begin to put a price on the PR value.” As we become increasingly visual, getting our information instantaneously and sharing it on global platforms, fashion can continue to make leaps and bounds with designers who previously might have found breaking through hard, find that they can break the rules and find exposure. 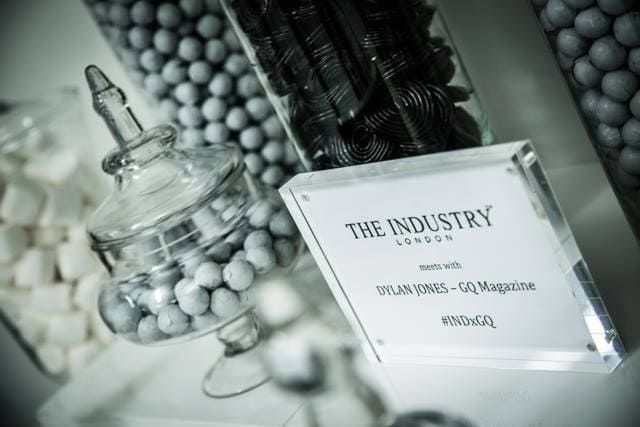 Dylan Jones at The Industry #INDxGQ

I always love this kind of question. Where is it all going? What is next for media? How is digital evolving? When asked though, Jones with his straight talking style simply says; “The short answer is I have absolutely no idea. Now isn’t that quite a succinct point to end on? Let’s watch this space to see how the menswear market grows into it’s next (much more visual and higher profile) phase.