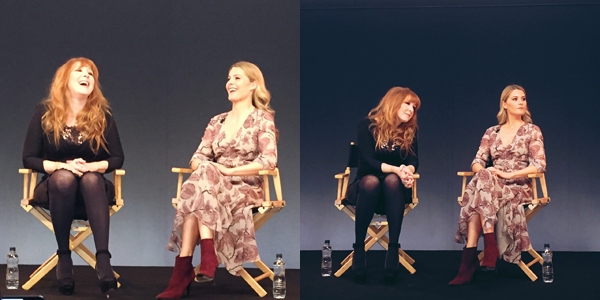 “There’s nothing low key about my life darling.” This is one of the first quotes I note down from Charlotte Tilbury as she talks in conversation with Kinvara Balfour at the Apple Store on Regent Street. It seems to combine the makeup artist turned business woman’s acute self awareness and confidence which has shaped her brand and career. In two years Charlotte Tilbury has gone from being the makeup artist to the stars to becoming a star in her own right. Charlotte Tilbury the person embodies her eponymous makeup brand and she’s a little bit bombshell and old school glamour with her trademark long red hair, flawless makeup, figure hugging black dress and high sandals. This brand has been built to be one you can trust as Charlotte is proud to acknowledge she’s been in the makeup industry for 23 years now.

Yet Charlotte Tilbury, by her own admission has been and is ‘extremely lucky’. Growing up in Ibiza she was immersed in a celebrity world from a young age with icons such as Grace Jones and James Brown in her social circles. She started assisting makeup artist Mary Greenwell who she credits with helping her on her journey and she quickly found herself working with supermodels such as Cindy Crawford. “As an apprentice, practice makes perfect and also you’re getting more confident,” she added. In her 23 years she continued to work with the greats including Isabella Blow, Kate Moss and Naomi Campbell. Case in point it is  Charlotte Tilbury’s April Vogue front cover working with Lucinda Chambers and Mario Testino which featured Cara Delevingne, Suki Waterhouse and Georgia May Jagger. She created two looks of neutral shades and bright ice cream pastels adding her famous feline flick into the mix.

Her work with Lee Alexander McQueen was revealing, showing the creative process between a makeup artist and a designer. She might talk to McQueen months before the show about the direction but invariably it would change depending on his creative vision. “So months before we talked about creating witches noses and now we’ve gone all the way to Antony and Cleopatra,” she notes. “You’re like a chameleon and you go on their journey.”  There’s just one woman that Charlotte would like to take her makeup brushes to, and that’s the Queen who she notes is iconic, brilliant and would quite like to see her in a 1930s style hand-painted matte red lipstick.

She may be the conduit of the vision in some ways yet in others she is the key to a successful shoot especially with those high profile celebrities with their brand image to consider. “When they’re doing a cover of Vogue there’s a trust and a respect. Quite often the team on the shoot will have been approved by celebrity. Quite often I’m flown around because I’ll make them look the most beautiful they can look.” Her confidence is extraordinary but she has the goods to back it up. You need to have confidence, for example if you’re chosen to do Poppy Delevigne or Amal Clooney’s wedding makeup. “I’m always honoured to be at that intimate moment. It’s just friends, family and you.”

PR-wise there’s a lot you can do through the mere association of being bessies with Kate Moss so it would be easy to chalk Charlotte Tilbury up to a charmed life of makeup and A-list friendships. However this would be selling her short. The real pull of Charlotte Tilbury is her ability to make women look and feel amazing and as luck would have it, she’s bottled it to sell. “I wanted to create a makeup revolution,” she says of her makeup line. “I’m a make up artist at the top of my career. My friends would ask, ‘how do you do that thing you did on Kate last week?’ But I’m an alchemist, it might be a mix, two lipsticks a bit of concealer and it looks great now but not in 5 minutes time. I wanted my makeup line to be easy to chose, easy to use and easy to gift.”

Charlotte Tilbury makeup launched only 18 months ago exceeding all expectations. There have been many milestones – Cara Delevingne at the Rock and Kohl event at Selfridges a particular standout moment. “Cara, she’s a friend of mine, I’m very lucky. Not many people knew she could drum so I called her and asked her. She cut her holiday short. I like to bring my backstage world to people and make it fun. It’s inclusive.” Despite her knack for stunts and networking she declares that’s not her natural arena. And for her in the retail landscape, it is the product which is king. Her ‘Magic Cream’ was so sought after it made 200 people queue outside Selfridges to get it and they broke records that day. “I’m not a marketing person, I’m looking at it from an expert point of view, I’m a perfectionist,” Charlotte explains. “The formulas often aren’t often forgiving enough. For a smokey eye I want it to be backward and forward like a windscreen wiper. My passion was to give it back to all women, give all my secrets and tricks.”

The beauty industry is a crowded market but no doubt still a buoyant one, even in times of war, lipstick was not rationed and sales remained strong. The idea of putting everything you need together for one look is kind of like one of those gift sets you get for Christmas, only the difference is, this looks like it actually works. Her branding is strong and considered, looking at colours of rose and gold to covey what Charlotte stands for. “I love it it’s the colour of passion; it’s hedonistic and naughty.” Sales are rocketing, Kate Moss gave her sign off to the products declaring them ‘easy to use’,  and although she is playing her cards close to her chest, she suggests she is even eyeing up retail space. You get the sense that she is, like all entrepreneurs and business women, brimming with new ideas but also that she has the midas touch to her decisions. On Instagram she was posting prints from photographer Norman Parkinson when she was contacted by his grandson to ask her if she would like to look through the archive. This summer, those prints will now appear on Charlotte Tilbury’s packaging elevating the brand once more with covetable prints.

Social media has been more a help than hindrance. “I love social media – it’s a portal, a direct voice to your customers and a two way conversation,” Charlotte remarks. “Magazines have limited amout of pages but with social you can bang on forever!” However, in the midst of the beauty empire, of all the a listers and parties and summers in Ibiza, there’s also hard work. Long haul flights, time away from family, constant pressure. “I wish there were more hours in the day. Sometimes you’re tired but makeup can hide everything. It’s really important to enjoy everything – you’ve got to make it fun.” Charlotte always appears to remain positive, talking of the travel she acknowledges she’s an adrenaline junkie. “I’m so privileged. You can be shooting in palaces or deserts – the craziest places.”

Whether you have tried her makeup or not, you may soon find it it dominating the makeup scene, even the men’s market could be a potential market was touched upon in this interview (her magic cream is also popular with men). It is her basic premise that makeup can make someone feel better about themselves, that she can make people look different and in essence change lives. It is hard not to fall for the idea that the power of makeup can ensure you make a grand entrance when you enter a room, but with this kind of confidence, you have to believe it’s possible. However something tells me she might be able to achieve that dream, because as Charlotte Tilbury herself says; “If you have the right makeup you can conquer the world.”

I met first Kinvara Balfour through her association with Style Card while I was working at Donna Ida -which resulted in a fabulous photo shoot for their Style Insider feature. I have fallen in love with her and her In Conversation With series where she has interviewed fashion greats including Anna Wintour! Check here for the next talks at Apple on Regent Street. Follow Kinvara Balfour on Twitter and Instagram.