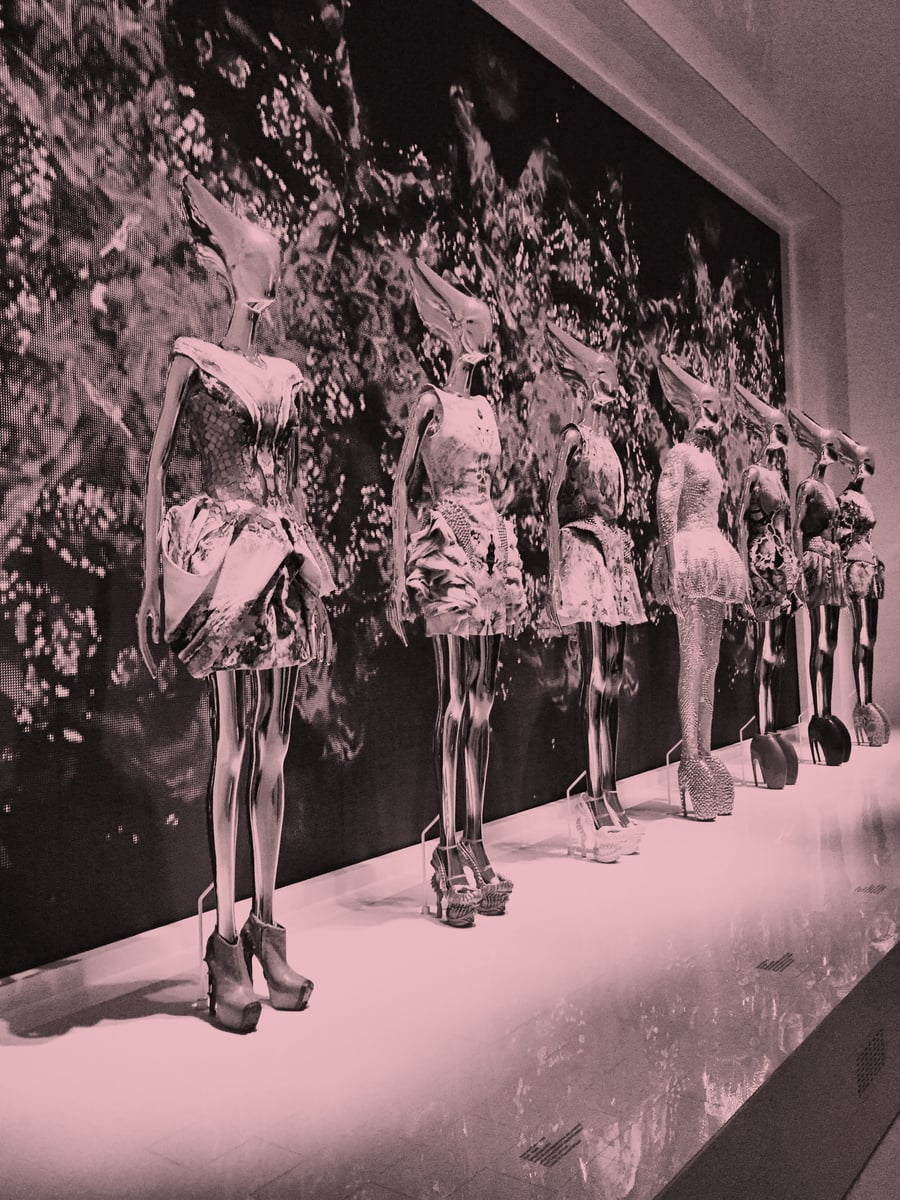 Alexander McQueen was a creative genius and joined together beauty, art, sculpture, history and culture all into one beautiful vision of fashion. His clothes were crafted, almost sculpted and he could see beauty in the ordinary or as he said himself, “I think there is beauty in everything. What ‘normal people would perceive as ugly, I can usually see the beauty in it.” The Alexander McQueen Savage Beauty exhibition, in partnership with Swarovski, opens in London at the V&A this Saturday 14th March and the journey is stunning, surprising and well worth the visit to this amazing museum. It is a very fitting tribute, the V&A, as Martin Roth, Director of the V&A summed up in his emotional speech, “the V&A is its natural home.” 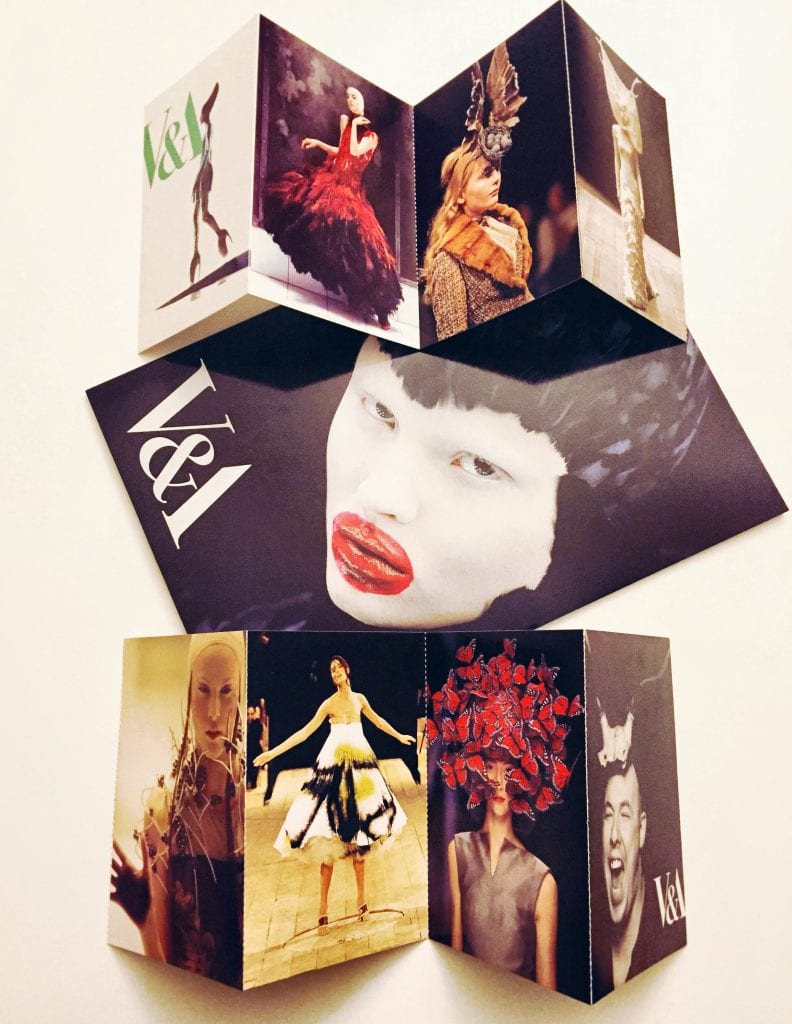 Lee Alexander McQueen was a visionary and as Sarah Burton the Creative Director at Alexander McQueen says he was, “brave, honest, romantic, fearless, a genius.” So it is a visual rollercoaster full of twists and turns with room on room of exquisite pieces. When I visited it was the press preview, so especially busy and packed full of top notch fashion journalists taking it all in. 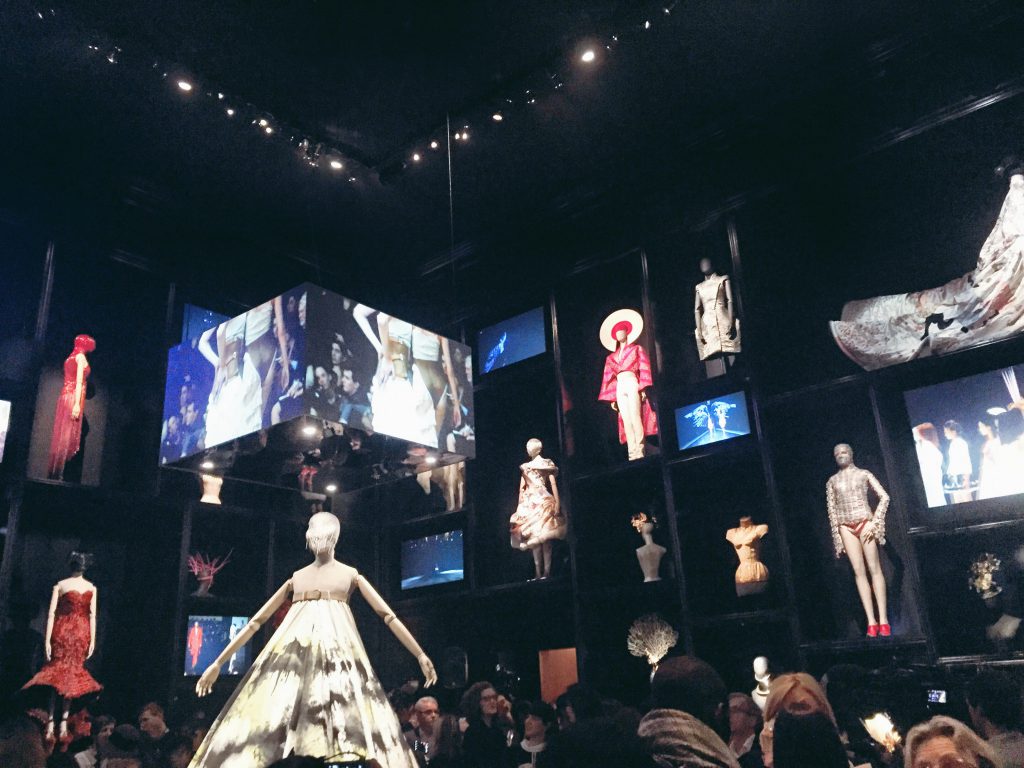 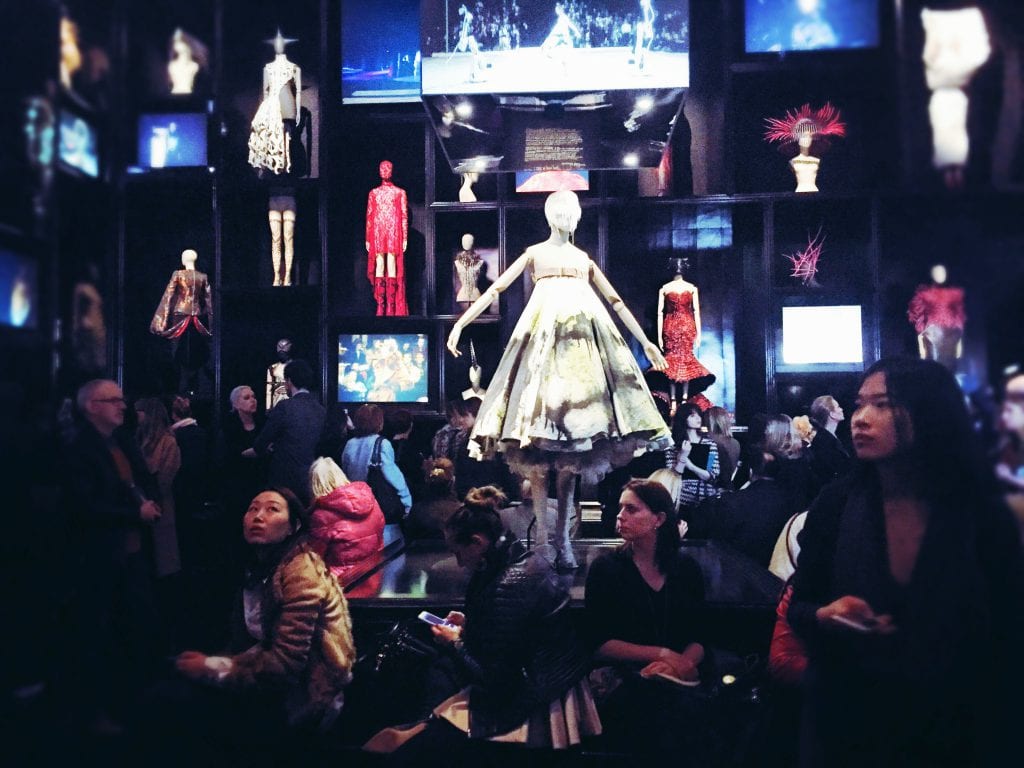 The Cabinet of Curiosities genuinely takes your breath away with high ceilings and catwalk videos mixed in with the designs – from sky high shoes, the butterfly hat and in the centre is the famous dress from 1999 which was spray painted live on the catwalk on model Shalom Harlow. 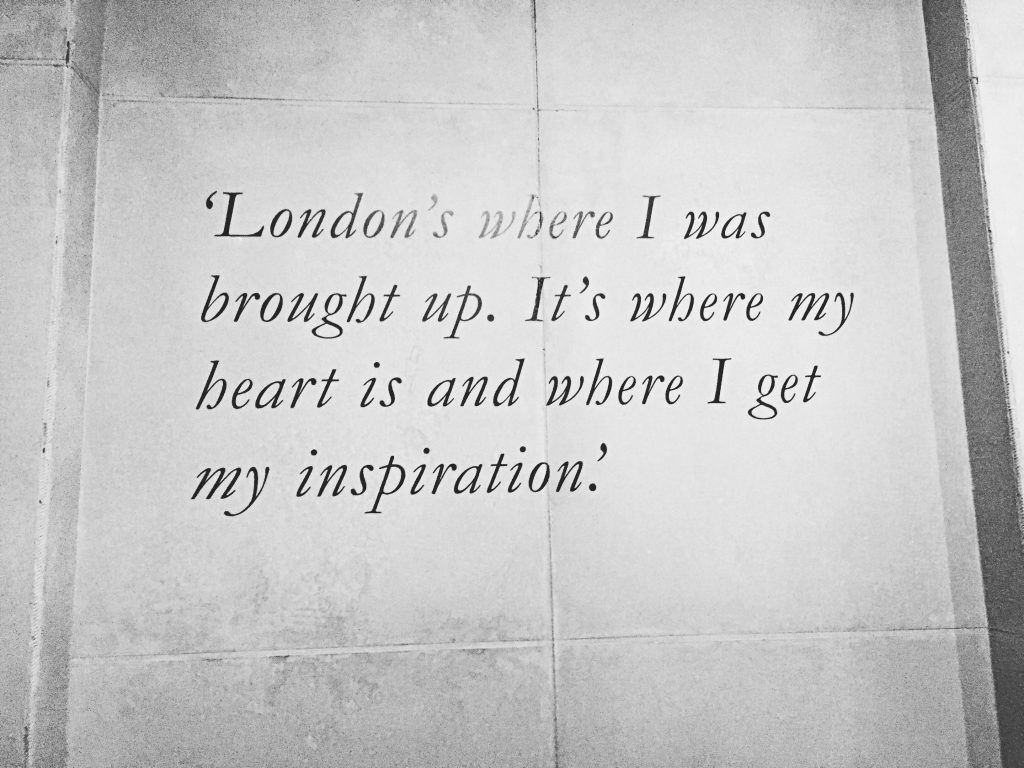 London and indeed the V&A were both crucial to McQueen’s inspiration with quotes on the walls of the exhibition saying; “London’s where I was brought up. It’s where my heart is and where I get my inspiration.” On the V&A McQueen said,  “The collections at the V&A never fail to intrigue and inspire me. The nation is privileged to have access to such a resource…it’s the sort of place I’d like to be shut in overnight.” Now he is the centre of the V&A, with each room paying homage to a different theme and concept. 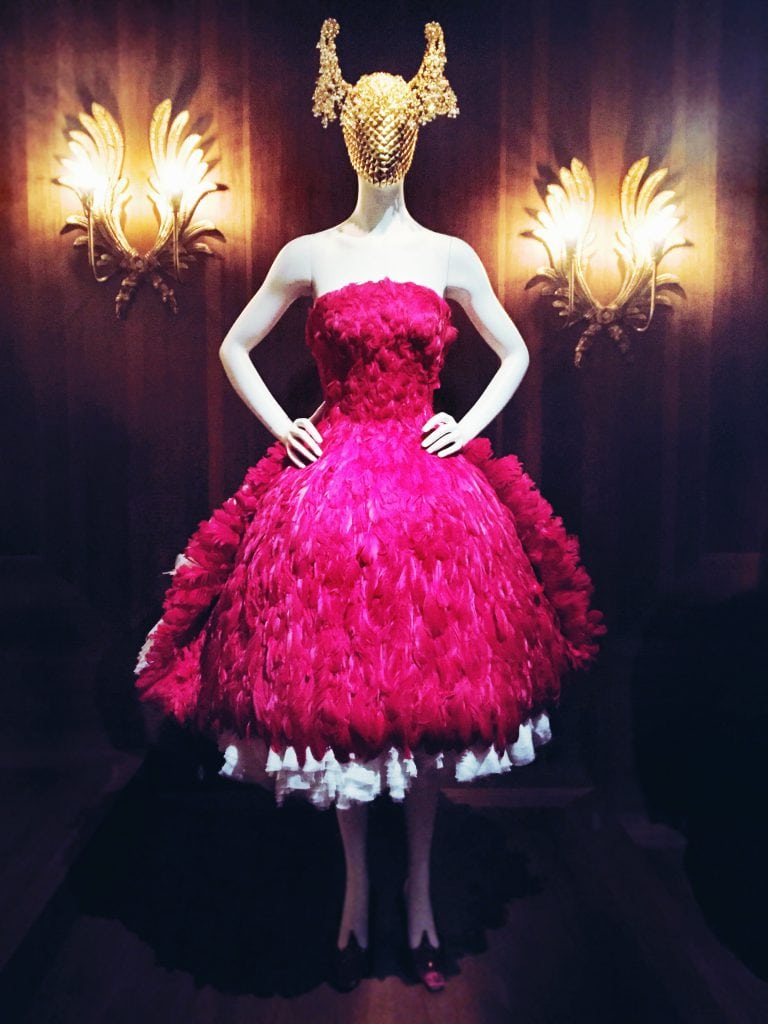 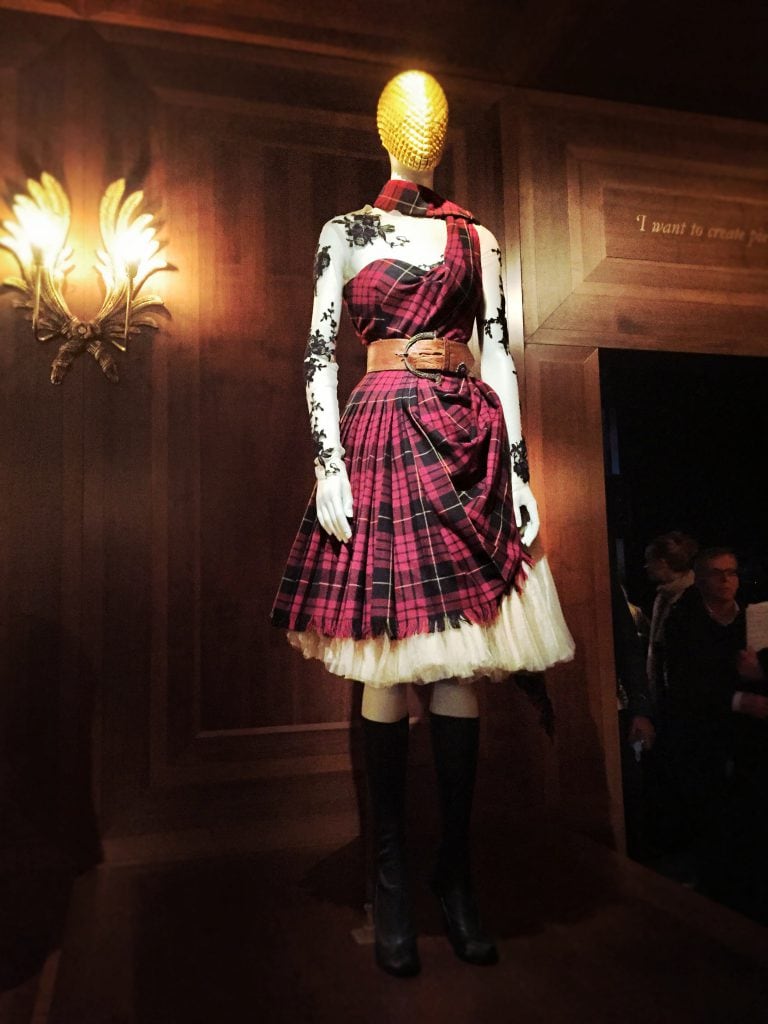 My favourite room was the ‘Romantic Nationalism’ room with Scottish influences and explorations of colonial past (pictured above). The second overwhelmingly beautiful moment is seeing the hologram of Kate Moss twirling around in her ethereal organza silk gown which was projected onto The Widdows of Culloden catwalk and named Pepper’s Ghost. You won’t be able to take your eyes off Miss Moss – the spectre is divine, as is the dress, with layers upon layer of which come alive with an magnificent illusion using projectors and mirrors (and one would guess, a wind machine)! 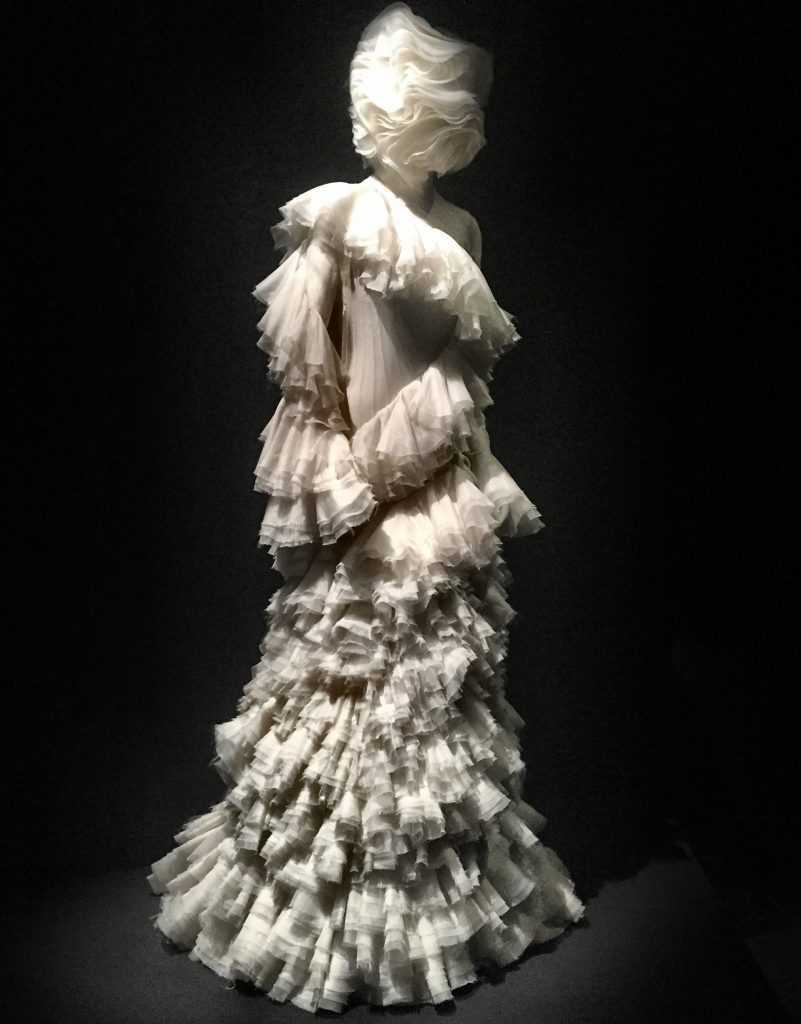 What is undeniable is his taste for drama, for a show, a performance. From a marketing point-of-view, the collections, the vision, the story, the depth of character all captured in a catwalk show, equally mesmorising and shocking, it makes you realise this was a wonderous world, pre-iPhones, pre social media, yet still capturing headlines and raising the brand way above the high street and into the higher eschelons of fashion and art. 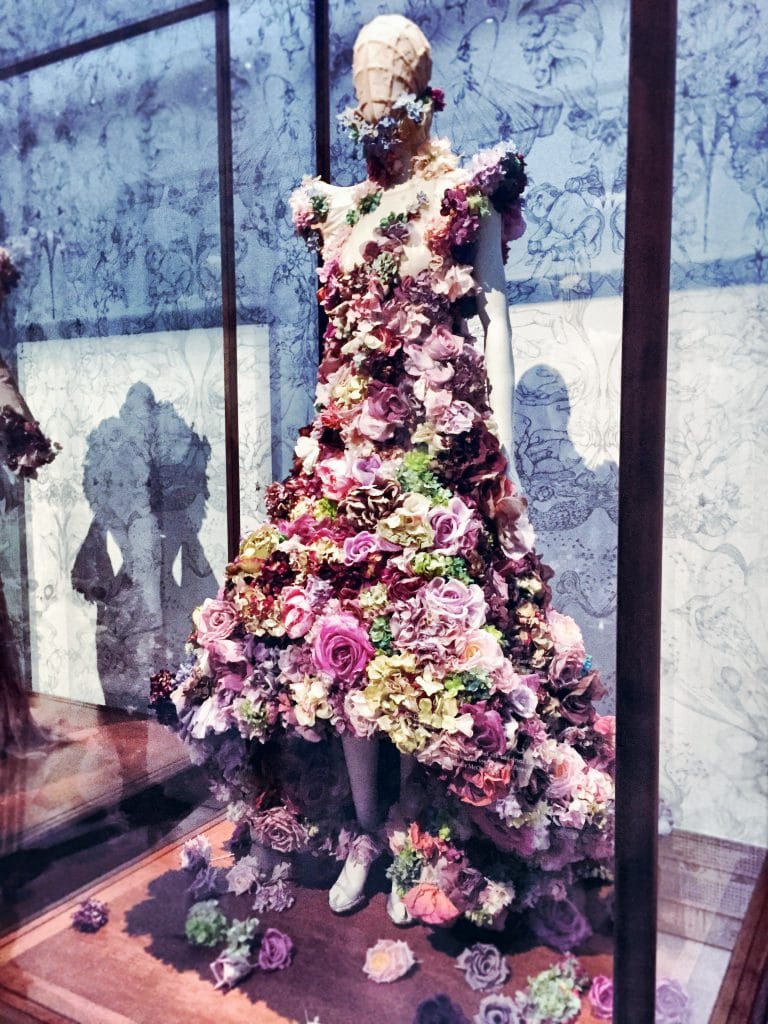 The detail in the gown above takes the phrase ‘floral gown’ to another level. McQueen also added real flowers to these fake ones, turning this in to a living breathing natural creation where they fell to the catwalk, dying. How must it feel to wear one of these creations? A true work of art, not just a dress. 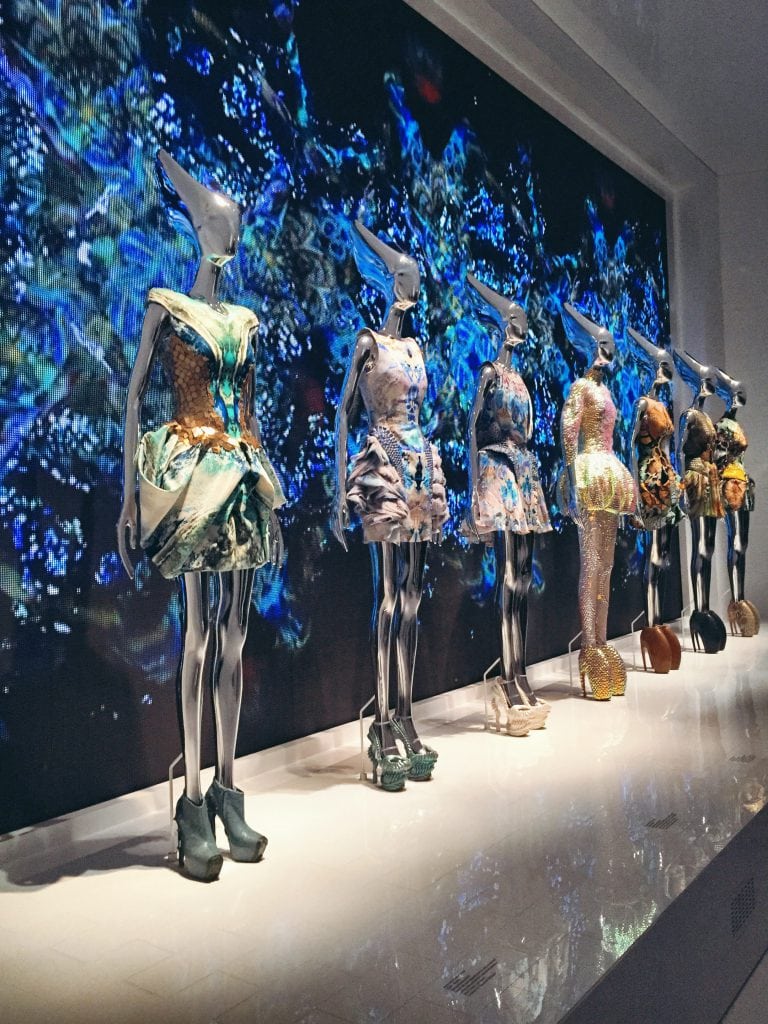 Beyond that, the team at the V&A have excelled themselves with this exhibition. It wasn’t long ago I was raving about the Horst Exhibition on Photography and Style but this is on a grand scale. After originating at the Costume Institute at the Metropolitan Museum of Art in New York, it has been interpreted by Claire Wilcox, Curator at the V&A. The last room (pictured above) is from McQueen’s last collection Plato’s Atlantis which was his take on the global warming phenomenon where the ice caps eventually melt and we live under the sea in metallic short dresses which cinch in at the waist with gathered skirts and uber high ‘Armadillo’ heels.

Take it all in yourself and visit the V&A in London to see Alexander McQueen Savage Beauty with thanks to Swarovski, AMEX, MAC Cosmetics and Samsung. Tickets are £16 and YES are STILL AVAILABLE until 2nd August 2015! Go here.