As preconceptions go, Alexandra Shulman has a lot to live up to, after all she is the editor of Vogue, the most formidable and revered of fashion magazines – even Carrie Bradshaw struggled to be ‘Vogue’. Alexandra Shulman is being interviewed for Apple’s In Conversation With series by Kinvara Balfour and I am expecting glamour and soundbites and probably to leave interview a bit more ‘fashion’ than I went in and frankly to be inspired.

And although she IS an inspiring woman, she would probably hate me for writing that, for she is much more straight-forward and down to earth than you may be expecting. “I’m not a great one for being inspired by people, maybe it’s a generational thing,” she says.  And not that she is likely to be reading this because she is not falling over herself to jump on board the blogging or social media train, choosing reading The Guardian and Daily Mail (print versions) and the excellent Business of Fashion each morning instead of an edited newsfeed on Twitter or Instagram.

“I just got a Kindle, that’s my digital,” Alexandra Shulman

Alexandra is being interviewed on the eve of Fashions Night Out, the retail event which seeks to engage shoppers and retailers alike, boosting profits and Vogue’s portfolio as they go along. It is fitting that Regent Street is the focus for this year’s event and this bustling store is packed to the rafters at the best of times, suddenly two glamorous women are on a makeshift stage at the front of the store – v. modern non?

“People can always find time to do things they really want to do,” Alexandra Shulman on writing a novel

I will never tire of listening to anyone talk about their journey, but it is surprising how similar stories become when reduced to a media approved version. I had no need to worry here, this was like an unscripted honesty. As one of the longest serving editors of Vogue, she has seen fashion evolve over the years. “Every end of fashion has exploded over the last 20 years,” she says pointing out that a high street brand like H&M linking up with a designer in the 80s would have been unthinkable. But there we have it, fashion literally bursting out of the seams, I think there is no bigger sign of the times than the accessibility of fashion, we can all devour a live steaming of a high fashion show these days online whilst walking around Primark in our Ugg boots (NB I never do that BUT I could).

“I used to edit a magazine that came out 12 times a year, which was kind of lovely I have to say. Now it is 24 hours a day. The nice bit is that you can engage with people around the world. The not so nice bit is the work cycle is endless,” she confesses. So how does she manage it? Easy really, she hires the best in the business, doesn’t go to all the shows (she sends her team instead), doesn’t micro-manage people, in short she’s the boss you want.

She has a healthy amount of criticism for the industry she works in, which surprises me more than I expect it to. “I feel strongly that the amount of fashion show we have is ridiculous,” she asserts, more on grounds of environmental concerns but it is hard not to conjure up reels of Instagram feeds of everyone and your grandmother flying off for various fashion weeks. At the risk of revealing I am in my thirties, it wasn’t like that in my day! As we get over-excited about the accessibility of fashion, perhaps we have forgotten to ask ourselves about our core values, in short what are we as individuals adding to the industry?

“I look at my suitcase and think there must be an easier way than this,” Alexandra Shulman on packing.

Social media has become such a permanent fixture in my head, and certainly many people, that I can’t quite contemplate a reversal in fortune. But why do I really think that? “I think the jury’s still out. There are so many people on Instagram. So many people growing likes and followings but still not seeing their business grow.” She says. “Vogue is in exactly the same position.”

“The secret of Vogue’s longevity is that it’s always kept up to speed,” Alexandra Shulman

A business woman at heart then, good at hiring, always an eye on the bottom line and always looking to the future. Vogue turns 100 next year which will be marked by a special exhibition at the National Portrait Gallery celebrating a century of style in a dolls house setting, a gala, a fly on the wall documentary and a revamped website. The magazine has also been supplemented with a Vogue world with Fashion Night Out, Vogue Film and Alexandra’s personal idea of the Vogue Festival, which she insists they make a bit of money from but that isn’t the point, it is a live event to reflect Vogue’s ethos and content.

The good news is, whatever your job is right now, you could end up on Vogue’s payroll, as online News Editor Lauren Milligan revealed to me, there is no straight forward way to work for Vogue. She advocates if you really want to get into the fashion industry, you will, the key is to be persistent and work any contacts you have.

“It helps if you can spell as well,” Alexandra Shulman

And Alexandra herself, who said herself it never entered her head that she would be part of that world, how did she get in? “I didn’t want to be a journalist, I wanted to work in the music industry and that didn’t work out. So I was jobless and someone said there’s a job going as the editor’s secretary,” she explains. Worked out ok right? And she certainly downplays her journey saying she hasn’t really experienced challenging times in the fashion industry. “I’ve been quite lucky,” she pauses. “Or I’m good at what I do.” You don’t need me to tell you that the answer is the latter. 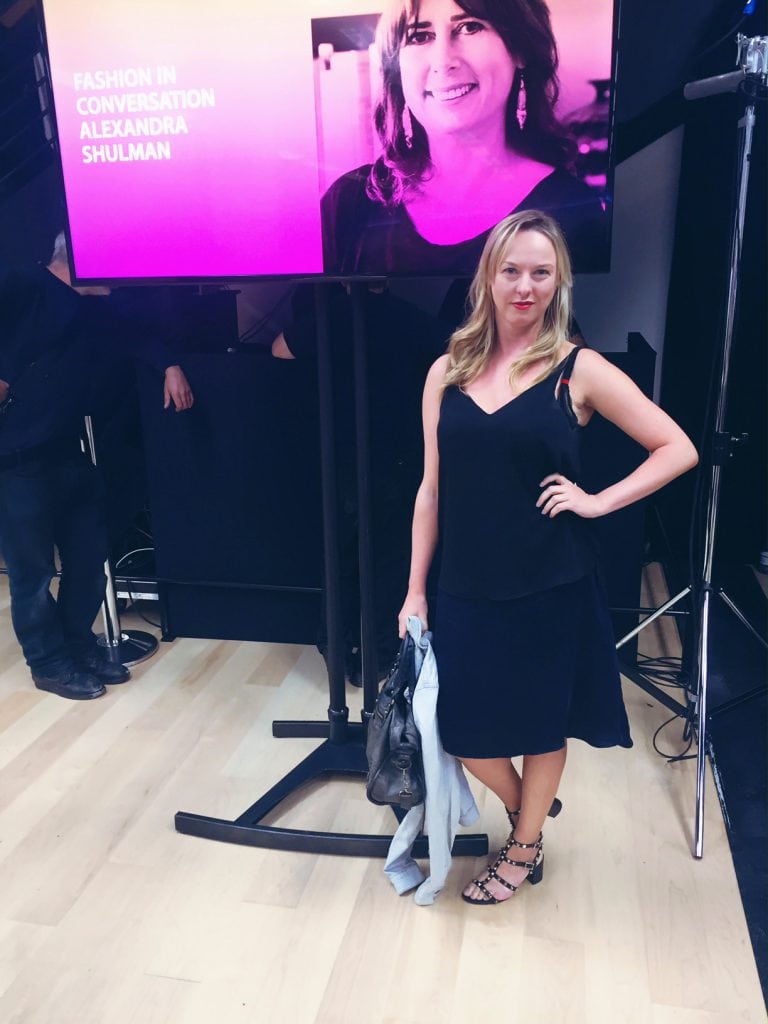 Note – this post contains some affiliate links so if you purchase the book below I receive a small percentage of the sale. My reviews are always open & honest.

Read Next – Getting Naked With Interview – Kinvara Balfour