Getting Naked With Interview Paula Fry aka CityFashGal 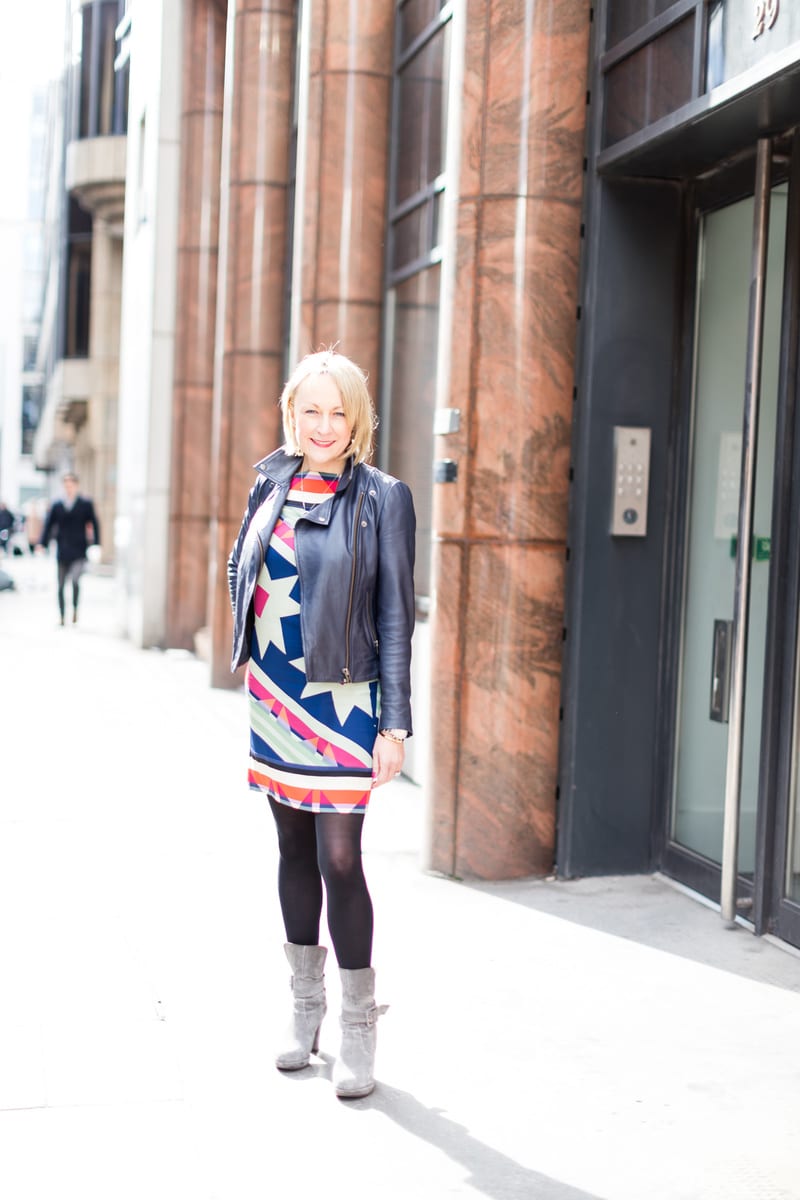 I first met Paula Fry through her digital persona, @CityFashGal and thought she was hilariously funny. Fast forward six months and I was sat with her discussing a DONNA IDA shopping event in the veryyyyy plush offices of the financial company she works for. CityFashGirl does exactly what she says on the tin, she is a extremely hard working woman (which involves a 5am wake up call to travel into the city) but she also likes her business day job with a side of high fashion. Every single day she finds time for a bedroom snap of her daily outfit alongside a self effacing, humorous caption and voila – CityFashgal it is! There’s more to Paula than meets the eye though, she left the finance world to try her hand at retail by opening a vintage fashion boutique, plus in the last year she’s the co-founder of a website called Feeling Flush which is aimed at the significant gap in the market for women over 40 to share and collaborate. I wanted to know more, so here we go, let’s get the gossip… 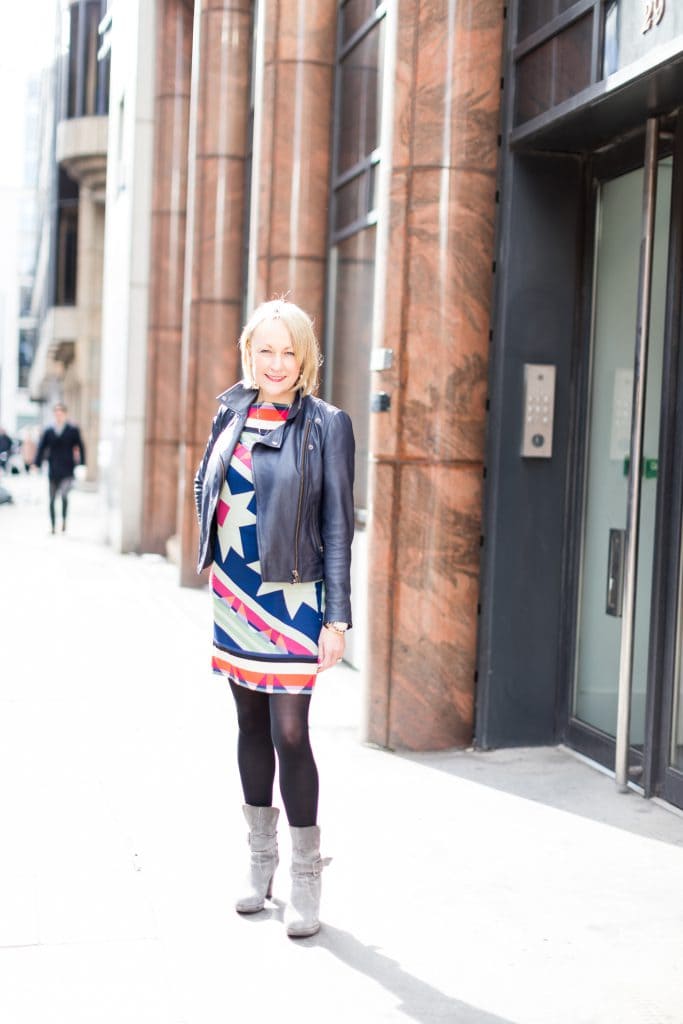 NakedPRGirl: Where are you from originally and where do you live now?
Paula Fry aka CityFashGal: I was born in Liverpool (eh eh calm down calm down) but from the age of 4 was brought up in Wigan (upt North). I met my husband on holiday in Corfu aged 17 and moved to Kent to live with him aged 18 (look away now children) – we rented a little basement flat in Tunbridge Wells and we still live there (not in the flat obvs!)

NakedPRGirl: What did you study? What was your first job?
Paula Fry aka CityFashGal: I passed 9 O-levels and probably should have gone to university but I was dying to work so left school at 16 and started work in travel (I already had a Saturday job at Thomas Cook from the age of 14) – I moved around with Thomas Cook in various roles until I was 22.

NakedPRGirl: What was your big break?
Paula Fry aka CityFashGal: I was working within a business travel implant for Thomas Cook just after getting married and decided I wanted to work for the investment bank where we where based. I was organising all the group travel for the firm and spent a lot of my time on and off the trading floors talking to people. I somehow managed to get myself an assistants job on the currency trading desk and a year later became a junior trader! It would be near impossible to do that sort of thing now but this was 1994… 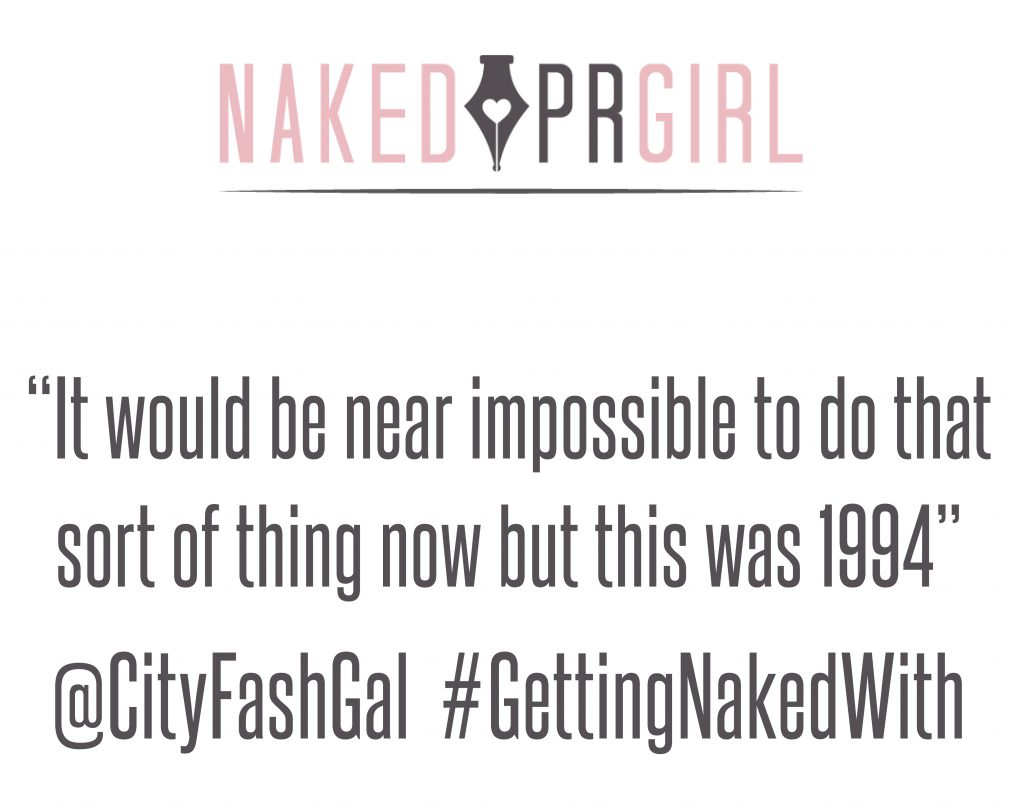 NakedPRGirl: You work in finance – tell us about your day job?
Paula Fry aka CityFashGal: I stopped trading in 2008 – after a long career at Goldman Sachs and had a year of a wobble whilst deciding what to do next with my life aged 38. I now work in financial technology (fin-tech) for one of the worlds largest data firms. I speak to investment banks all over the city – I am a relationship manager for foreign exchange and fixed income (bonds) trading…

NakedPRGirl: Fashion has always been important to you, why did you decide to open a vintage boutique?
Paula Fry aka CityFashGal: After going back to a brokerage firm after the financial crash for 6 months, I was a bit deflated with the whole city and as fashion was my passion, I decided to put my money where my mouth was, and take a leap to open my own boutique in Tunbridge Wells – there wasn’t a decent dress agency for miles so I combined that with selling vintage too. As austerity was en vogue after the crisis and women where being cautious with their fashion spend, it really suited both my vision for shopping and recycling plus the mood at the time.

NakedPRGirl: Why did you decide to close it? And what did you do to continue your passion for fashion?
Paula Fry aka CityFashGal: After 5 years it was apparent that owning a boutique was never going to make me a fortune or even a decent living life wage (lordy retail is hard!!!), After 2 years full time running my business, I had already gone back to the city – first part time – and then was hired by another bank, so running a business (even with a manager etc) and working in London was exhausting in the end and I just couldn’t sustain it. It meant I worked 24/7. The money I earned in the city always fuelled my passion for fashion so whilst running my business I had got used to doing social media and posting my outfits before that was an actual ‘thing’! I still do it now, albeit just for fun and not for followers! 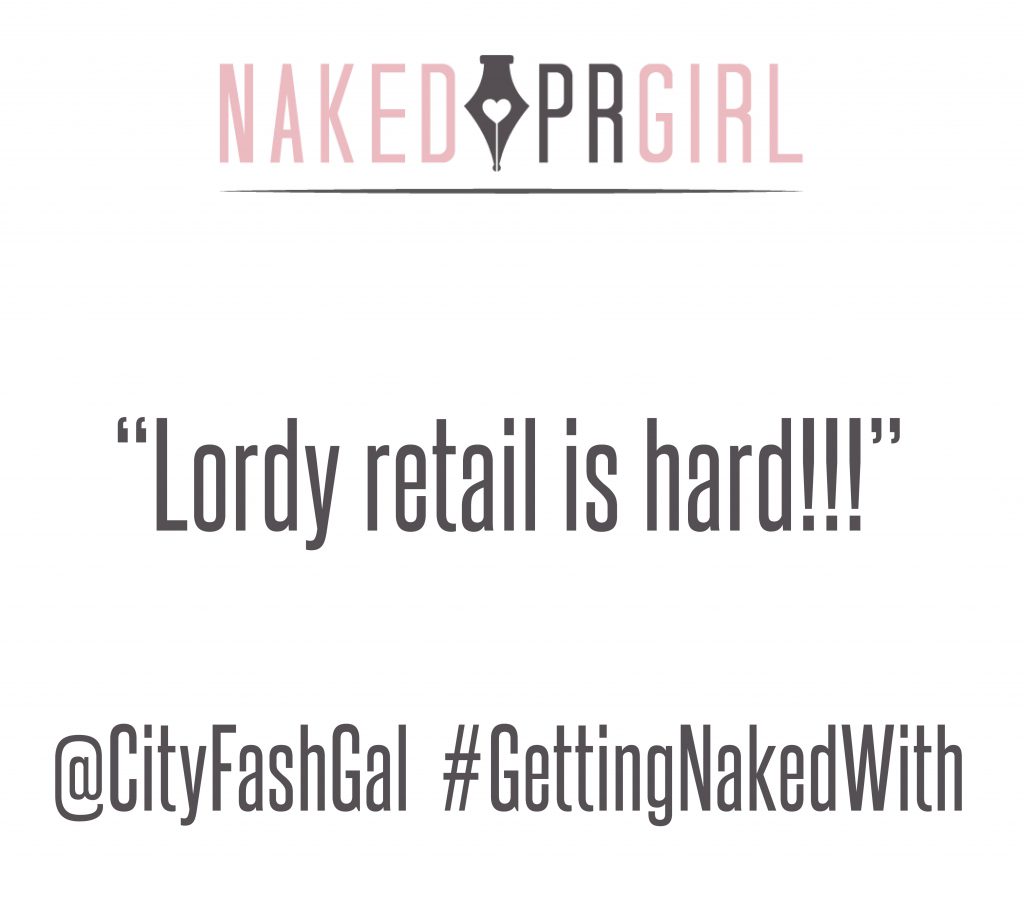 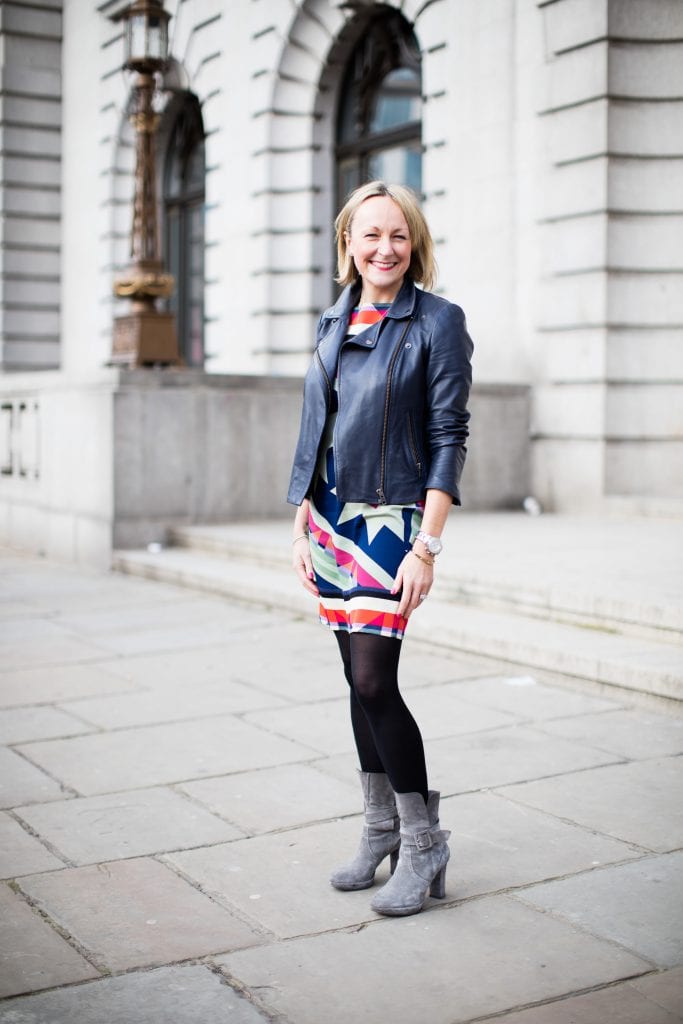 NakedPRGirl: Your latest venture is Feeling Flush – where did the idea come from for it? How did you come up with the business plan and name? Who did your branding for you?
Paula Fry aka CityFashGal: Towards the end of last year, I was chatting to a girlfriend (we had met thru social media as she also owned a Vintage business at the same time and had become friends in RL) and being similar ages we were talking about symptoms of peri-menopause and how many women didn’t understand what was happening to them. That conversation started a private group called Feeling Flush ( Lynnette’s idea for the name) and we invited all our girl friends of a certain age (40-65 is probably our demographic) to join in. The group was invite only and soon started to grow as more and more people invited their friends. Lynnette and I have to approve everyone and it’s now 600 strong! I did all the branding, including building the website – amazing what you can do when you put your mind to it! 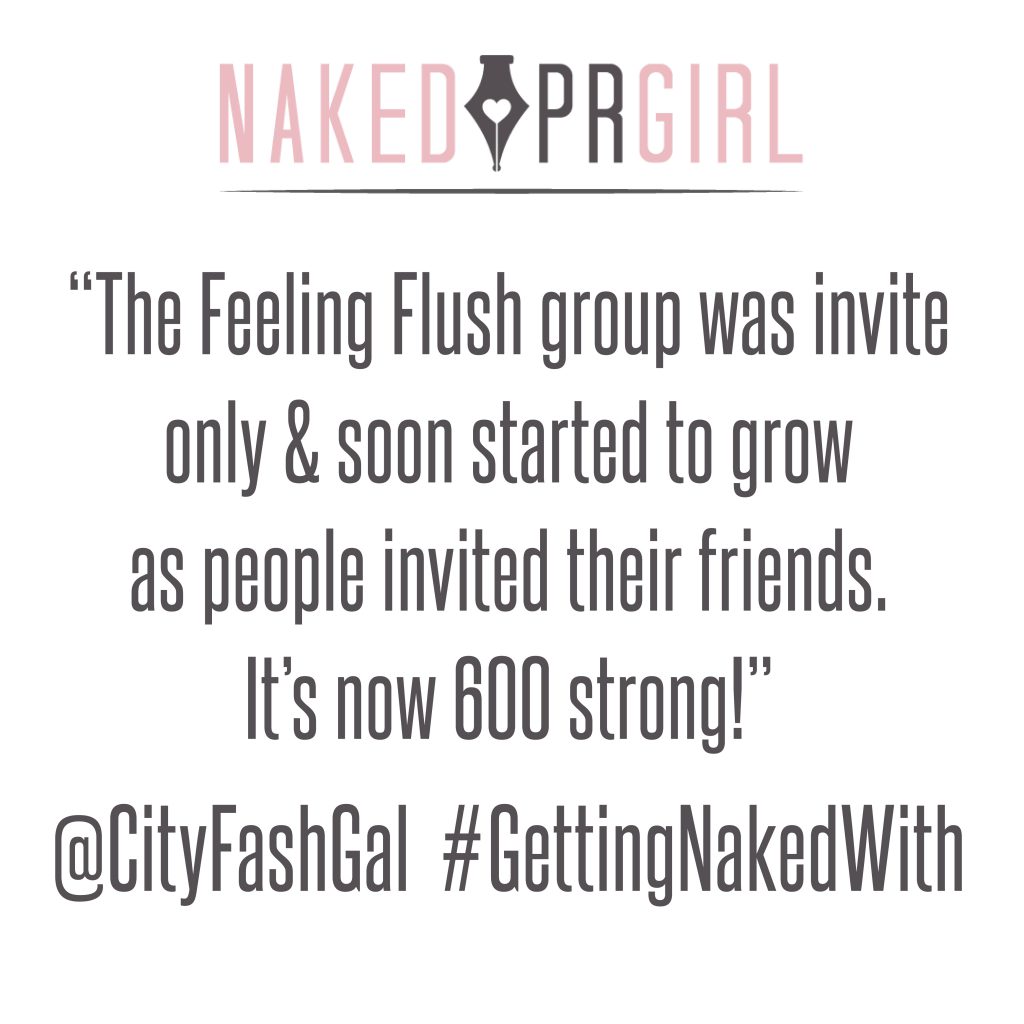 NakedPRGirl: Tell me about your business partner – do you have a special bond?
Paula Fry aka CityFashGal: Lynnette and I are very different but on the same wave length. It’s been easy to start the website with her. We are both super driven too which is what you need!

NakedPRGirl: What’s your USP of Feeling Flush? What does the future hold?
Paula Fry aka CityFashGal: So at this stage, FF is just for fun but also a great comfort and source of reference for women. I’m not sure what will happen – we have no immediate plans to monetise it as such but who knows! And if I’m honest, I’m not sure how you can monetise at the minute. I’m just enjoying the ride.

NakedPRGirl: Do your colleagues in the financial world know and understand what you do outside of work?
Paula Fry aka CityFashGal: I write for the website at weekends so it doesn’t clash with my day to day commitments – I really don’t have a lot of spare time but the good thing is, when I’m in the mood to write, I have the creative outlet. At first, Lynnette and I put pressure on ourselves to blog all the time, but to be honest, we update as and when. Our readers are happy with it having decent content already and anything that needs addressing immediately, we update in the private Facebook page.

NakedPRGirl: Do you think you are a serial entrepreneur?
Paula Fry aka CityFashGal: Mmmmmm…. Maybe. I not sure I’d start another business to be honest. Certainly not until retirement.

NakedPRGirl: Do you have a particular career highlight that stands out?
Paula Fry aka CityFashGal: Oh so many to be honest. But filming with Grayson Perry was up there with the best things ever!

NakedPRGirl: What’s your personal style? Have you had to look at marketing yourself as a brand?
Paula Fry aka CityFashGal: Let’s just say I’m never knowingly under dressed! No I haven’t – is that a thing? *googles*

NakedPRGirl: How do you use social media for your business?
Paula Fry aka CityFashGal: Lynnette uses Twitter for FF and I use Instagram. And we update daily/weekly depending on what’s going on. For personal stuff, I use Instagram and Twitter.

NakedPRGirl: What’s your favourite social media channel? Do you have any social media tips?
Paula Fry aka CityFashGal: Probably Instagram. I used to love Twitter back in the day when people chatted more – it’s where I’ve met so many people and become friends in RL or we have moved to following each other on other channels. It’s such a great community spirit if you are following the right people. My biggest tip is to have breaks from it now and then – it can be all consuming which is not good for anyone. Also, don’t believe all you see and read – it’s so edited…. 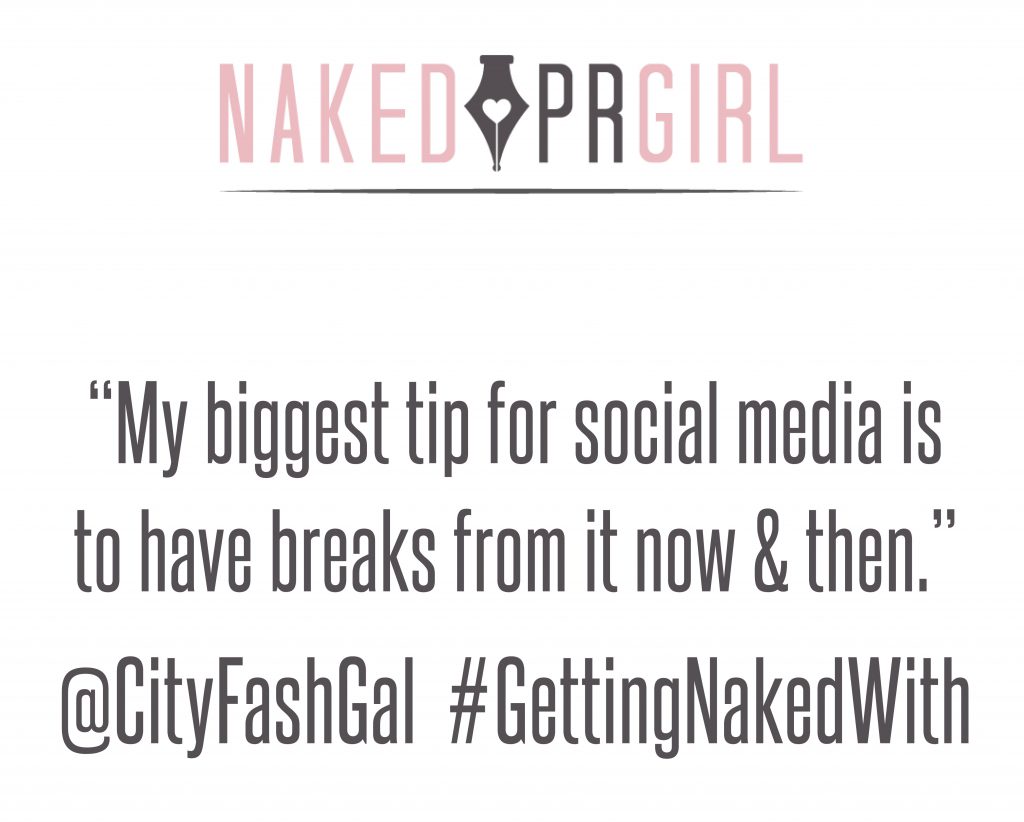 NakedPRGirl: How do you split your time between working in financial business vs your new blog vs real life?
Paula Fry aka CityFashGal: Work comes first of course – most of my day – I have maybe two or three hours free per night max before I go to bed and I work out for one of them once or twice a week. The blog is for weekends and a stolen hour in the evening sometimes.

NakedPRGirl: How do you manage your blog/social media workload – are you a planner and a scheduler? And do you get techy in the back end?
Paula Fry aka CityFashGal: I don’t schedule – we don’t need to as the website isn’t money generating so engagement isn’t the most important thing to us on that channel as yet. Facebook we update most days – either one of us or one of our members will post. We have some hilarious discussions and I love all our members – we have some super strong ladies as part of the group. I’m not a planner either – I’m more ‘this is how I feel’…

NakedPRGirl: How have you seen your industry changing over the last few years?
Paula Fry aka CityFashGal: So in finance, yes – we have become more tech based, certainly in the trading space where I work and also in the blogging space for sure – the world got a whole lot smaller…. Influencers are taking over.

NakedPRGirl: Where do you see it evolving in the future?
Paula Fry aka CityFashGal: Technology ain’t going away…. I suppose people need to think of better ways to engage. I worry about this generation and their social skills if I’m honest.

NakedPRGirl: How important are London events in your work? What do you look forward to attending?
Paula Fry aka CityFashGal: Not so much at the moment. If I was doing the whole fashion rounds then that would be different but I just don’t have the time to attend these things (nor the energy!!)

NakedPRGirl: Are there any London events or venues on your wishlist to attend or visit?
Paula Fry aka CityFashGal: I love an art gallery and an exhibition – anything at the Serpentine.

NakedPRGirl: What are your favourite places to shoot? And who is behind the camera? Do you have a certain ‘look’ you’re aiming for?
Paula Fry aka CityFashGal: My bedroom with my phone. I’m looking for ‘not minging’….

NakedPRGirl: Who in the industry inspires you?
Paula Fry aka CityFashGal: Iris Apfel – I want to be her in 40 years time…

NakedPRGirl: Do you have a motto or mantra that you live by?
Paula Fry aka CityFashGal: Don’t sweat the small stuff – I have it tattooed on the back of my neck in latin (Aguila Non Captat Muscas)

NakedPRGirl: Where would you like to be in ten years time?
Paula Fry aka CityFashGal: A famous author…