I’ve always been intrigued by the idea of ghostwriting; it holds a kind of mysterious glamour that I find intoxicating. How it works and what it REALLY means is often the source of discussion in the media so I am thrilled that a real life ghost has agreed to be pinned down to reveal all in my latest interview. Shannon Kyle is journalist who has had work published in pretty much every publication under the sun including Fabulous, Metro, The Telegraph,The Pool, The Guardian, Mirror and Daily Mail with real life stories and often, her own personal pieces. She was also the writer behind Jade Goody’s Forever in My Heart which sold 100,000 copies (bet you’ve read it, I know I have!) and more recently she’s been the woman behind Emma O’Reilly’s The Race To The Truth which was shortlisted for Sports Book of the Year in 2014. So how do you become a ghostwriter, and how does it work? Here’s my interview with the interviewer, let’s meet Shannon Kyle!

NakedPRGirl: Where are you from and where did you grow up?

Shannon Kyle: I was born and grew up in Chatham, one of the Medway towns in North Kent.

NakedPRGirl: What did you study? When did you decide you wanted to be a writer?

I won a competition when I was 15 to write a ‘Letter to the future’ for my local paper, the Medway Reporter. The prize was a ride in a helicopter over my house, £50 and the letter was buried in a time capsule to be opened in 100 years time under a building. I doubt I’ll live to see the day that happens! I went to Salford University to study English language and literature, although I regret not doing journalism as that was all I was interested in.

NakedPRGirl: How did you get your big break?

Working for the Staines and Egham reporter after University, I managed to get an interview with Ali G, aka Sacha Barron Cohen. His TV show was very popular at the time and put Staines in the public eye. I asked to interview him as his character and Sacha agreed. We got the exclusive story and it went on the front page and was re-printed in the Sunday Telegraph. The former Chilean dictator General Pinochet who was under house arrest on my ‘patch’ also provided a few good stories and shortly afterwards I was nominated and became a runner up for the Press Gazette’s Young Journalist of the Year. Then I got headhunted by the Nationals.

NakedPRGirl: You also write stacks of real life stories, how did you get into journalism? Do you enjoy getting to know people from different walks of life?

I am fascinated by people and their lives. It’s never boring and it’s a privilege to hear so many touching, funny, and emotional stories over the years. I have listened to stories about the best and worst of humanity.

NakedPRGirl: Have you always been a ghostwriter or how did that come about?

I was a journalist first and my next big break was being offered the chance to write Jade Goody’s last book. I’d never written a book before and I was only given a three week deadline to do the interviews and write the whole story. Crazy.

NakedPRGirl: That book, Jade Goody’s Forever in My Heart, sold 100,000 copies, how did it feel to tell such an important story?

I’s always an absolute privilege for people to share their stories with you. On Amazon the book was announced as number one bestseller before it had even been finished. Jade’s story proves life is stranger than fiction. She was incredibly brave.

NakedPRGirl: How do you go about working with a celebrity when writing a book with them?

I don’t really see celebrities as any different from anybody else. They’re just people who have a story to tell like anyone else. I try to keep all interviews very informal. It’s important people are comfortable and relaxed otherwise they won’t open up. It’s important to be honest during book interviews otherwise the story won’t feel authentic when it’s on the page. 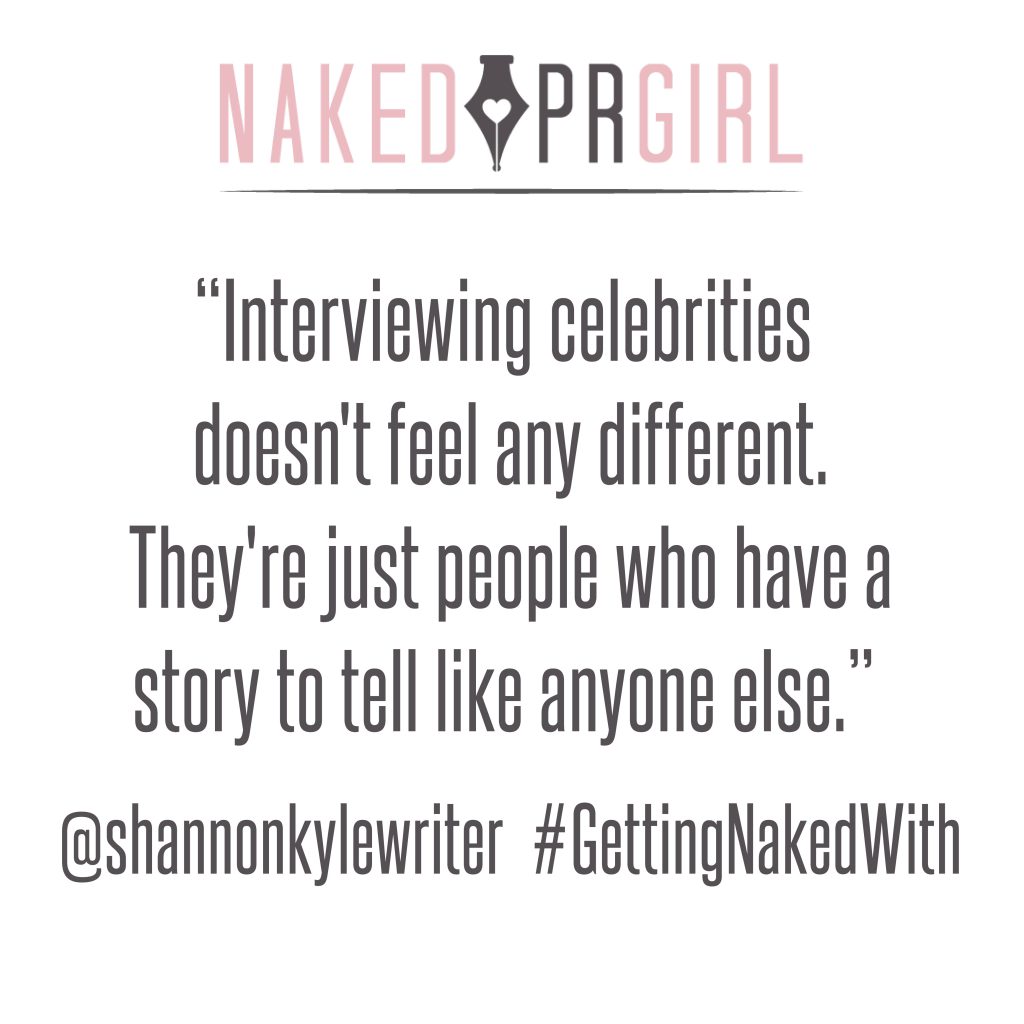 NakedPRGirl: I spotted you’ve also set up United Ghostwriters to help people searching for ghostwriters – what prompted you to set that up and how does it work?

United Ghostwriters is a collective of leading UK ghosts which was set up to help bring ghostwriting into the public consciousness. We are all busy ghosts with strong back catalogues and not only support each other but provide a ‘one stop shop’ for someone who needs their book ghostwritten.

NakedPRGirl: Do you think people are quite naive about the role of ghost writers? I remember the furore when Zoella released her book (ghostwritten by Siobhan Curham)!

Yes I think the public are often surprised most books are ghosted and not written by the authors. But I don’t think it really matters as without the author there is no book. Putting it bluntly the author is still the one telling the story, it’s just the ghostwriter is the one spending hours sat at a desk writing it into chapters.

NakedPRGirl: How do you get into the ‘voice’ of your author? Does it come easily?

I spend a lot of time with each author, which helps me soak up the voice! Each book takes around 25-30 hours of interview time. I always ask the author to read the work to ensure they’re happy with it and they feel it’s authentic. It’s really important they are relaxed and comfortable with me too, so they can open up.

NakedPRGirl: Have you ever disagreed with anyone you have been ghostwriting for or is it always a harmonious process?

Only once did I have an issue with an author but it was soon resolved with the agent stepping in to help. Sometimes chemistry doesn’t work between a ghostwriter and an author, but I’ve been lucky enough to work with some brilliant people who have respect for what I do and vice versa.

NakedPRGirl: How has digital changed your industry and what do you think the future of journalism will look like?

It’s changed it beyond all recognition. Budgets have plummeted, journalists are expected to sub their own copy and digital has obviously taken over from print. I know some national newspapers now expect journalists simply to rewrite a press release and do not allow them to take time to check the facts or question what is being said. This was the exact opposite of what we were taught in training. It’s really sad but now ‘fake news’ is in the public consciousness I hope it will swing the other way eventually and we will see a desire for proper investigations again. We need more, not less trained journalists to hold public bodies to account. Without good journalism the public can be lied to very easily. Look what happened during the EU referendum. 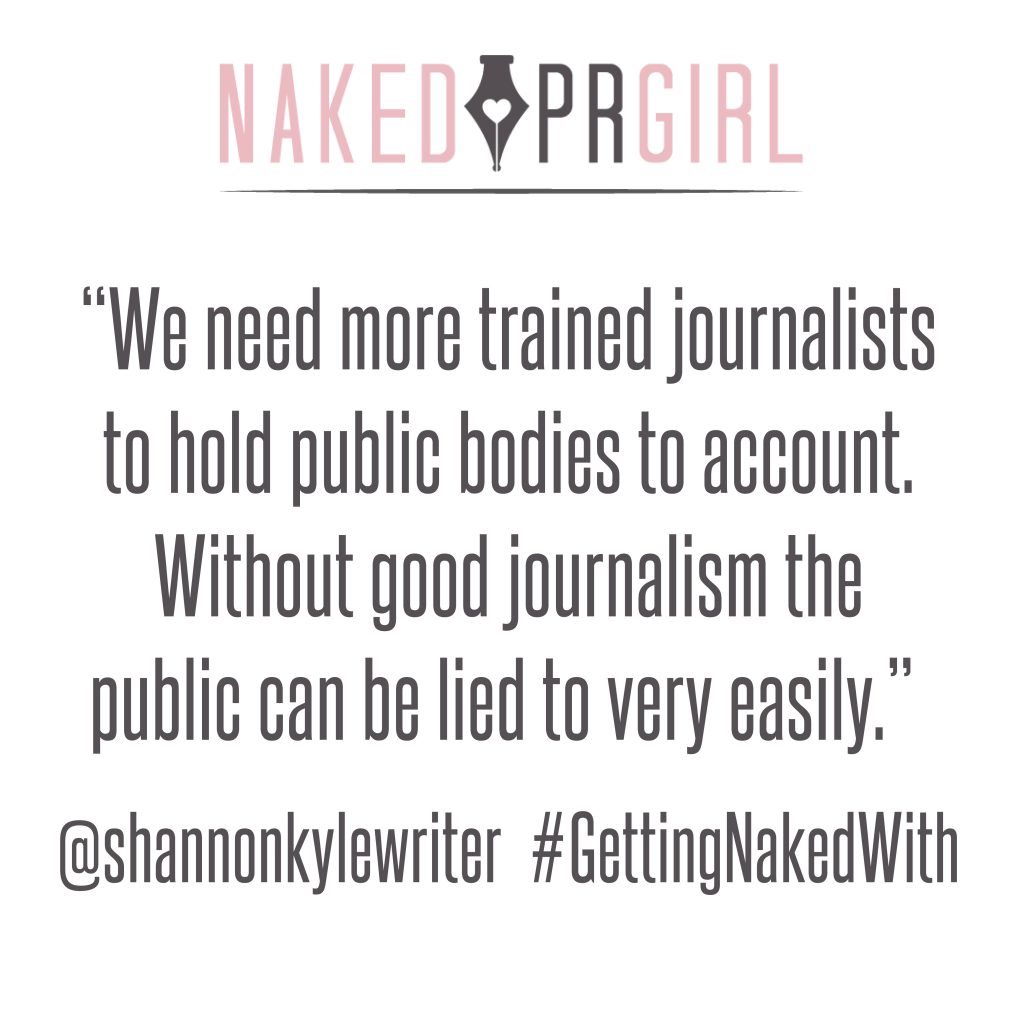 NakedPRGirl: How do you structure your working day?

I have a two-year-old so there is little time for procrastination! I work as many hours as I can during the day only leaving time to get outside to run in the park or by the sea. I’d go stir crazy otherwise! I also come up with my best ideas sometimes when I am outside walking. I have two daughters so I am lucky to be able to work flexibly about them.

NakedPRGirl: Do you have any advice for aspiring journalists or authors?

I’d suggest having a back up plan. These days fewer journalists and authors than ever before make a living solely from writing. I would find a specialist subject too and never ever agree to work for free. The whole ‘work for exposure’ culture has caused fees to drop and will never stand you in good stead for the future. 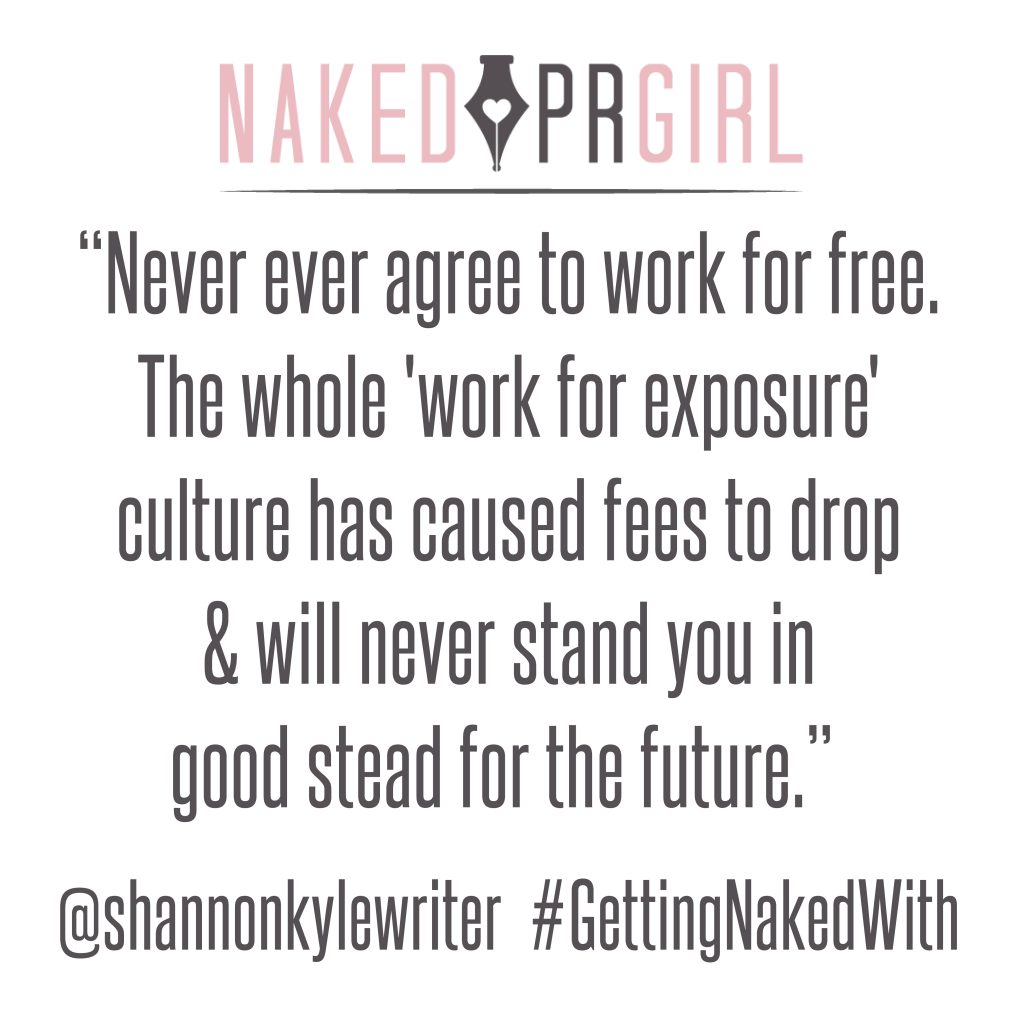 NakedPRGirl: How important is networking to you? Who inspires you to spend time with?

Everyone I know says they should network more, but I wonder what it really means sometimes? I can’t think of anything worse than a ‘networking event.’The best networking happens when it’s natural and organic.

I always dress in jogging bottoms and gym wear every morning as it forces me to go outside and get some exercise rather than be stuck at my desk all day. Aside from that, I love a shift dress, tights and boots or skinny jeans and an oversized jumper. At the moment I love Zara, Cos and Andotherstories, but often I buy second hand on eBay. I love hunting through the vintage shops where I live in Brighton too.

NakedPRGirl: Who’s story would you love to tell?

I’ve been a Beatles fan since I was a teenager so ideally Paul McCartney or Ringo Starr would be my dream clients. I’d also love to tell Yoko Ono’s story as she is such a fascinating character. I think Melania Trump would also have an incredibly insightful story to tell! I’d also love to write books that deal with the big life questions and ones which bring people hope. We live in a rather dark time of change and inequality and I would love to write books dealing with themes of social conscious to make people think.

NakedPRGirl: Would you ever be tempted to write a fiction novel?

I have tried! I have a full manuscript sitting on my laptop, but finding time to edit it is difficult. I’d love to write fiction as well as ghost, although I know it’s even more cut throat and competitive. I have lots of stories in my head however and dream that one day I will make the time to write them down properly. I am currently doing a novel writing course to help grow my confidence.

NakedPRGirl: What’s your strategy for the future? Where would you like to be in ten years time?

I have no strategy! Just to continue working as hard as a I can and tell the most interesting stories I can find. In this industry you never know what’s going to happen next, so I can only hope I am still busy with work.