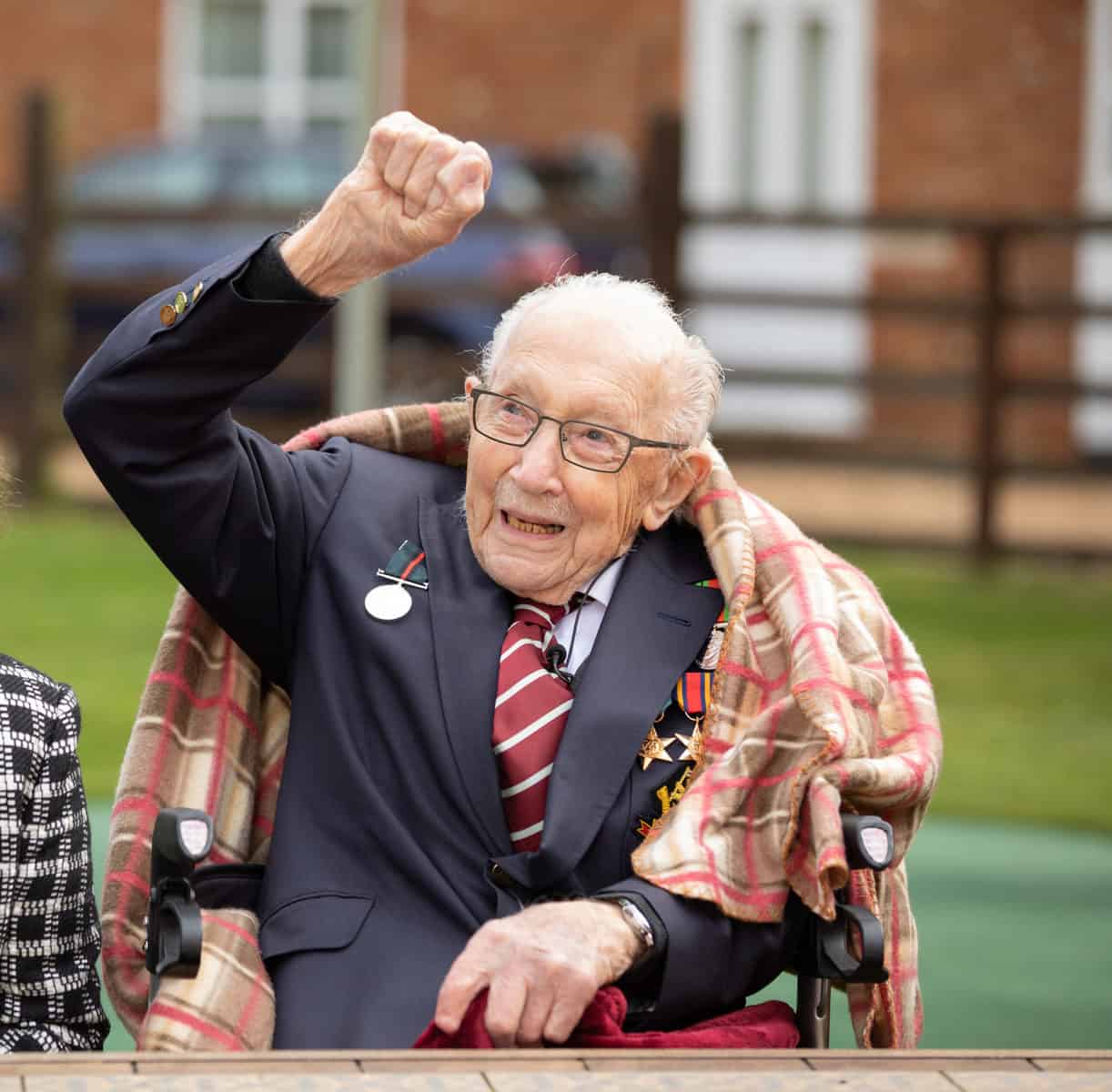 At the beginning of April 2020, while the UK was in the early stages of lockdown in response to the Covid-19 pandemic, Captain Tom Moore (or “Captain Tom”) pledged to raise £1,000 for NHS Charities Together by walking 100 laps of his garden by his 100th birthday.

His passion for the hardworking frontline workers and the NHS resonated far and wide, making international headlines. In a time where everyone was asking what they could do to help in the midst of a pandemic, Captain Tom showed us all what a single person could achieve—and he did it with exuberance.

At the end of 30 April 2020, the day of his 100th birthday, he had raised £32.79 million. His birthday was commemorated with a flypast, he received over 150,000 cards and was appointed as an honorary colonel. There wasn’t a dry eye in the house as the BBC and ITV both aired documentaries on Captain Tom for the VE Day 75 commemorations.

Daisy Craydon, a freelance PR Specialist, was initially approached by Captain Tom’s family to write a press release about the fundraiser to get the word out to regional press. From here, the campaign struck a chord with millions of people across the globe; this resulted in a tremendous outpouring of generosity during an unprecedented time.

Daisy Craydon speaks to me in this interview about Captain Tom, how the fundraiser grew and her recent foray into the world of freelance PR.

NakedPRGirl: So as you said on social media, last month you hit send on a press release that you hoped would get a little local coverage. £32 million later, you must feel elated. How did the campaign come about?

Daisy Craydon: I’ve worked with Tom’s daughter, Hannah for the past year and supported her business, Maytrix Group with Marketing and PR. She asked me to put together a release for her father’s walk, and that is as about organic as it gets. There was absolutely no PR brief, no objectives, we just wanted to raise some money for the NHS.

NakedPRGirl: Did the campaign take off straight away or did it take a little time to get going?

Daisy Craydon: Within 1 hour of me hitting send, the regional press on my personal database came back. It started with an interview on BBC Three Counties, MKFM and ITV Anglia. We knew then that we were likely to reach our initial target of £1,000.

NakedPRGirl: When did you realise it was going to go big BIG?

Daisy Craydon: The light bulb moment happened when Captain Tom appeared on BBC Breakfast, and his Twitter following just jumped up by the hundreds within a matter of seconds. It was only then that I took a step back and said ‘wow – brace yourself’.

NakedPRGirl: Captain (now Colonel) Tom has been celebrated up and down the land, what was he and his family like to work with?

Daisy Craydon: They are the most wonderful family, and I feel honoured to have played a part in their incredible story and efforts. When I met Hannah (Tom’s Daughter) for the first time, she said to me “I know we are going to work on something big together”. I just don’t think either of us imagined it would be quite this big.

NakedPRGirl: What was your personal highlight of this campaign?

Daisy Craydon: How can I possibly have just one? The number one single with Michael Ball was fantastic, but watching Tom complete his 100 laps was just amazing. It’s fair to say I shed many a tears throughout this journey.

NakedPRGirl: Which part of the campaign do you think mattered most to Colonel Tom?

Daisy Craydon: I think it has all just completely amazed him, and came out of the blue. He is most thrilled about spreading hope around the world to other people when they need it more than ever. He truly is one of a kind.

NakedPRGirl: You have recently become a freelance PR Specialist, what prompted the change and do you have any advice for others taking the plunge?

Daisy Craydon: I started up as a Freelance PR Specialist January 2019, after I was made redundant whilst on maternity leave. It forced me into something that I have always dreamed of doing, but never quite had the bottle to do. I have never ever looked back, and it has just opened so many doors up for me and my career. I’ve learnt so many new skills, and interacted with a whole list of amazing connections. I can’t recommend it enough, and for anyone else too scared to take that huge step in going freelance, I would simply say – face your fear, believe in yourself and set the bar high because you CAN AND WILL be amazing.

NakedPRGirl: What did you study? What was your first job?

Daisy Craydon: I studied Journalism at The University of Northampton, and after a two week internship at CNN, I realised it wasn’t the career route for me. I actually worked within the PR department at CNN whilst the London Olympics were taking place, and I knew that was where my heart lied; behind the camera and definitely not in front of it.

My first job was within the toy PR sector, and I LOVED IT! It was so exciting, consumer facing and challenged me in so many ways, especially when you’re a young fish fresh out of University. It gave me so many skills that I still use today with my press release writing, social media management and client facing communications.

NakedPRGirl: What’s your personal style? Have you had to look at marketing yourself as a brand?

Daisy Craydon: Believe it or not, I actually haven’t advertised once since becoming a freelance. I’ve been really lucky and word of mouth, and fantastic connections has helped me get to where I am today.

NakedPRGirl: How have you seen your industry changing over the last few years?

Daisy Craydon: A lot of people say that they don’t believe in the power of a press release, but I will challenge anyone that says this…look at Captain Tom’s story. It all started with a very regional press list that gathered more and more momentum as the days went on.

NakedPRGirl: How do you split your time between business and real life?

Daisy Craydon: I’m a mum, so splitting my time between mum and PR Specialist can be extremely difficult, especially whilst in lockdown. My partner owns a tailors, Souster & Hicks and is currently furloughed so he has been a massive support in looking after my daughter whilst I work tirelessly upstairs in my little office. I love being mum, but I also love working – and there is absolutely nothing wrong with that.

I still make time for my daughter to stick things on my face and bake cakes with me.

NakedPRGirl: Do you have a motto or mantra that you live by?

Daisy Craydon: In the words of Audrey Hepburn “Nothing is impossible, the word itself says ‘I’m Possible”!

NakedPRGirl: You must be pretty exhausted after all that! What is next for you? And for Colonel Tom?

Daisy Craydon: Watch this space…exciting times lay ahead (and one exhausted working mummy).

All images credited to Emma Sohl – Capture The Light Photography.