Getting Naked With Courtney Blackman 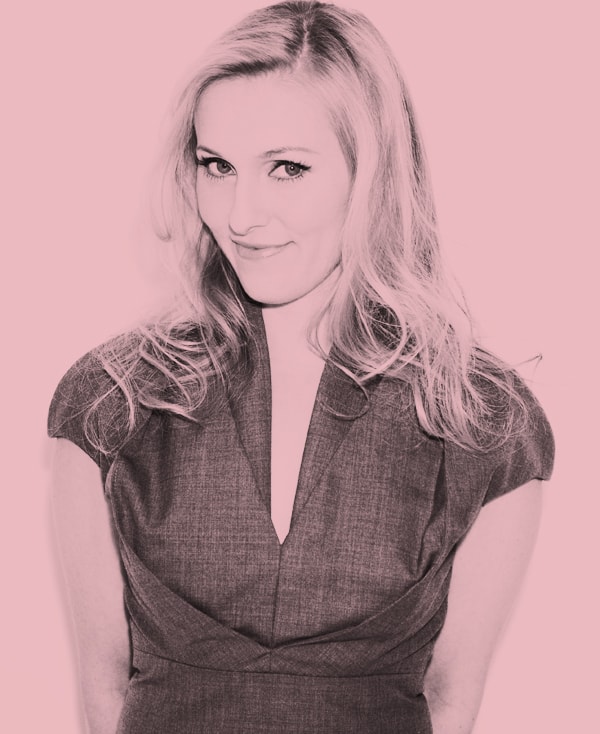 I have been trying to think of a way to capture Courtney Blackman in a few mere sentences and bring to life her bubbly persona in text. The effervescent PR guru is the life and soul of the party, and if you’re at that party, rest assured she’s probably the backbone of it too. She’s one of those people that just makes things happen and often she will be the person not just dreaming big, but she’ll damn well make sure it is actioned too, always with a smile on her face. I was introduced to Courtney through Donna Ida Thornton and I’m proud to be a member of The Industry, a private business members club for the luxury fashion industry. Her day job (so to speak – as PR‘s really are always working) is to head up Forward PR as their Managing Director – a company which started she up over ten years ago which has been phenomenally successful. If you get the chance to work with Courtney, grab it with both hands, and hold on pretty tight as you are in for a fast ride! We’ve collaborated a number of times, and my personal highlights with Courtney would be photographing her for Donna Ida’s Style Insider feature where we just laughed through the whole shoot (I was there as THE person to hold the light reflector NOT to take the actual shots!) We also shot the equally talented Kate Nash for Donna Ida, all co-ordinated by Courtney Blackman once again. I convinced her to unveil her hidden talents and secret backstories to me in this revealing Getting Naked With interview…let’s go! 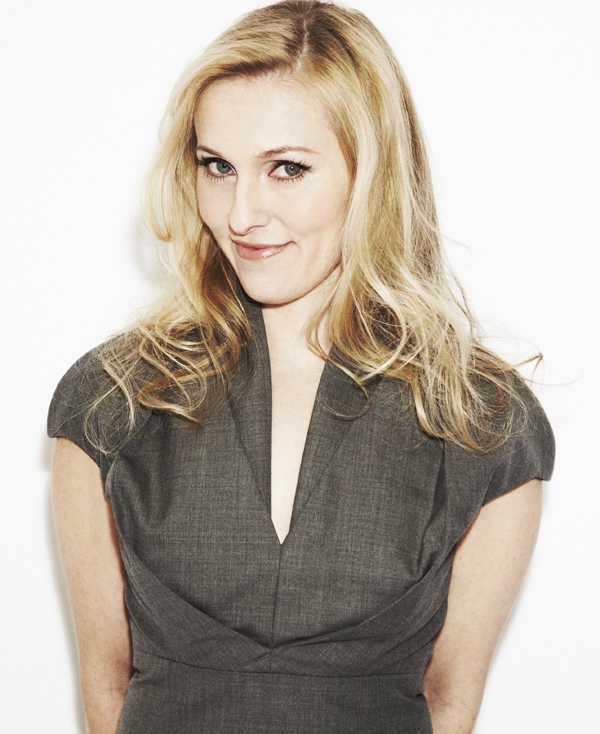 NakedPRGirl: What is your background? Where are you from?

Courtney Blackman: Oh, that’s a long one. I will aim for the abridged version. I was born and raised just outside of Denver in the States and have dual citizenship – both British and American. I have a background in international business and information systems and have lived and worked all over the world…and am now settled in London, and own a fashion PR agency and a private members club for fashion professionals…amongst other things.

NakedPRGirl: How did you get into PR? When did you decide it was the career for you?

Courtney Blackman: When I came back to the UK in 2002, I ended up working for a British designer as her PR and marketing director. We did a couple of presentations and our finale together was doing an on-schedule show in Paris. I thought, “Hey, I’m alright at this.” The designer moved to Tokyo so I started my own gig.

NakedPRGirl: What is your USP?

Courtney Blackman: Maybe a couple of things. I like to think being nice to people. I ensure all of my staff is polite and nice to people too. There are quite a few PR companies that operate under a very outdated method of extreme gatekeeping – being quite restrictive, unhelpful and well…kind of rude. They industry has changed completely with the advent of digital and social media and there is no logical reason to operate as such. It doesn’t work anymore and is very damaging to a PR agency as a brand, and the brands that they represent. Also, I think I stick out personally as a very petite blonde with an American accent.

NakedPRGirl: What is your favourite PR phrase which you use most frequently?

NakedPRGirl: Tell me about Forward PR – you recently celebrated 10 years – what inspired you to start it?

Courtney Blackman: Circumstances paved the way. The designer I worked for left London, so I was in a position to either go work for someone else, or take the entrepreneurial route. I choose the latter. I can’t believe it’s been over 10 years. 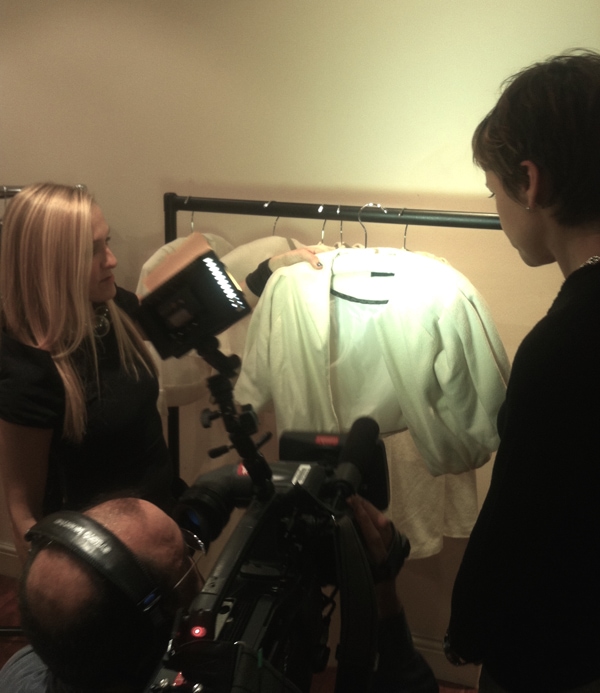 NakedPRGirl: What are your favourite PR moments from the last 10 years?

NakedPRGirl: If money was no object – what would be your dream PR campaign/stunt?

NakedPRGirl: Who are your favourite journalists/stylists or publications to work with?

Courtney Blackman: We work with so many editors, journalists, stylists and bloggers and if I started naming names, I would surely miss someone out and that wouldn’t be nice.

NakedPRGirl: How did you spot a gap in the market for your networking company The Industry?

Courtney Blackman: There just wasn’t a high level, well-branded professional networking group for fashion, so The Industry was a natural lateral move. It enables designers, photographers, stylists, journalists, lawyers, etc. to keep up with industry trends and to collaborate and work together – as a lot of industry professionals do not work in large companies, but as one-man bands or small firms. Meeting up regularly with contemporaries is important for personal and business development.

NakedPRGirl: The Industry London has held talks with fashion icons including Mary Katrantzou and David Gandy – who has impressed you the most and given the most memorable moments?

Courtney Blackman: Everyone we have in the hot seat tends to be really honest and open about their career highs and lows, which is great. Mary Katrantzou, was incredible, sharing everything about how she started and overcoming self-doubts. I loved after David Gandy’s talk how he was swamped with female audience members wanting to get their photos taken with him. He was lovely and accommodating and took a photo and chatted with each and every person that wanted to – a true professional. GQ’s editor Dylan Jones was a legend, Laura Bailey was so eloquent and mesmerising to look at. Caroline Issa just made everyone want to be her – so smart and so gorgeous! Alexandra Shulman was witty, Edward Enninful dug into a lot of topical issues and Lulu Guinness gave a spot-on made-for-television performance. 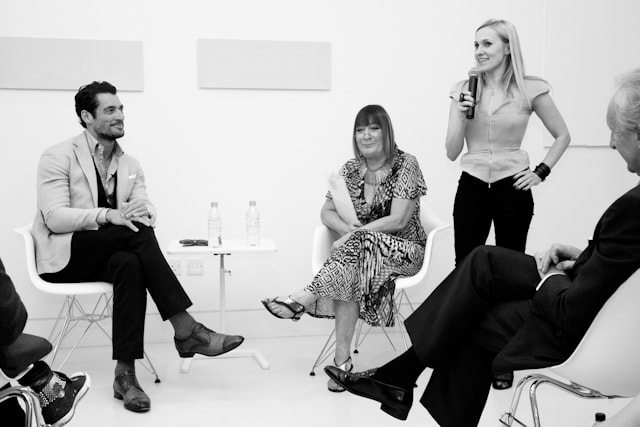 NakedPRGirl: What advice would you give to someone looking to get a job in PR?

Courtney Blackman: Be able to write quickly, accurately and creatively. Be extremely organised. Have a good sense of humour. Don’t be afraid to talk to anyone and everyone, and don’t afraid of rejection (we are quasi-salespeople after all).

NakedPRGirl: What is your style when you pitch to potential clients? How do you prepare for a pitch?

Courtney Blackman: If pitching to potential clients, it’s all about being over-prepared and professional. Pitching to journalists is in the same vain, we aim to be professional and informative and not overly PRy (overselling or over-embellishing) as a journalist can see right through that. 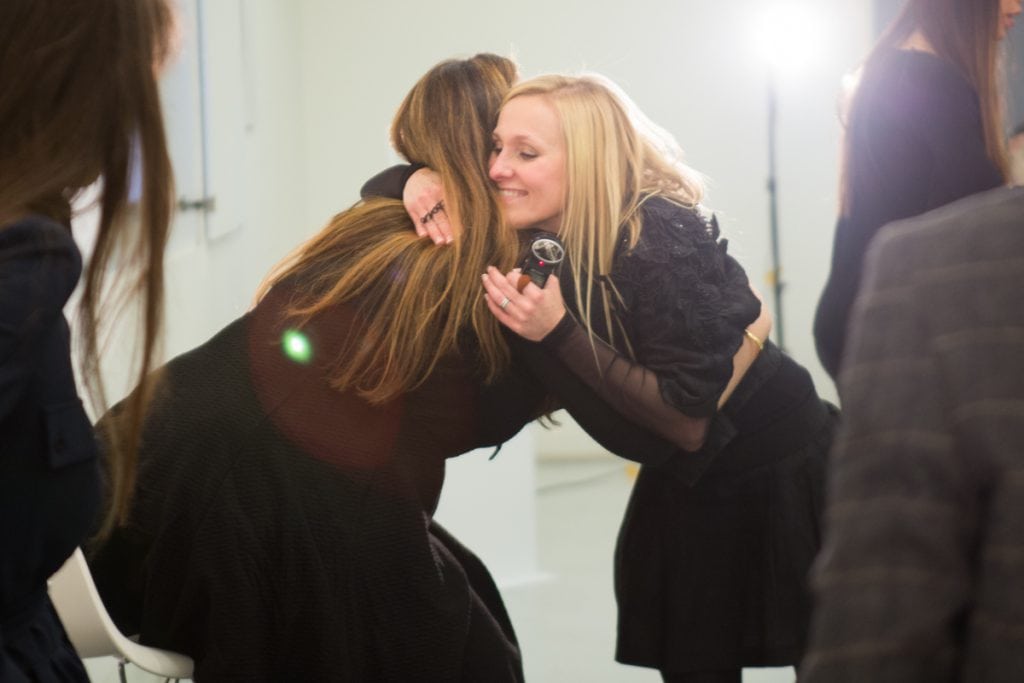 NakedPRGirl: How important is the digital world in our PR future?

Courtney Blackman: Hugely important. If anyone is looking to scope out a brand or a person, Google is the first port of call, so a brand’s SEO needs to be in tact, meaning that digital features are very important to build it up and keep it relevant. Social media has absolutely revolutionised PR for agencies and for individual brands. It’s hard to imagine what the new channels will be like in the next five, ten and fifteen years.

Courtney Blackman: A pen and paper and business cards, and then maybe a brush and some lip balm. 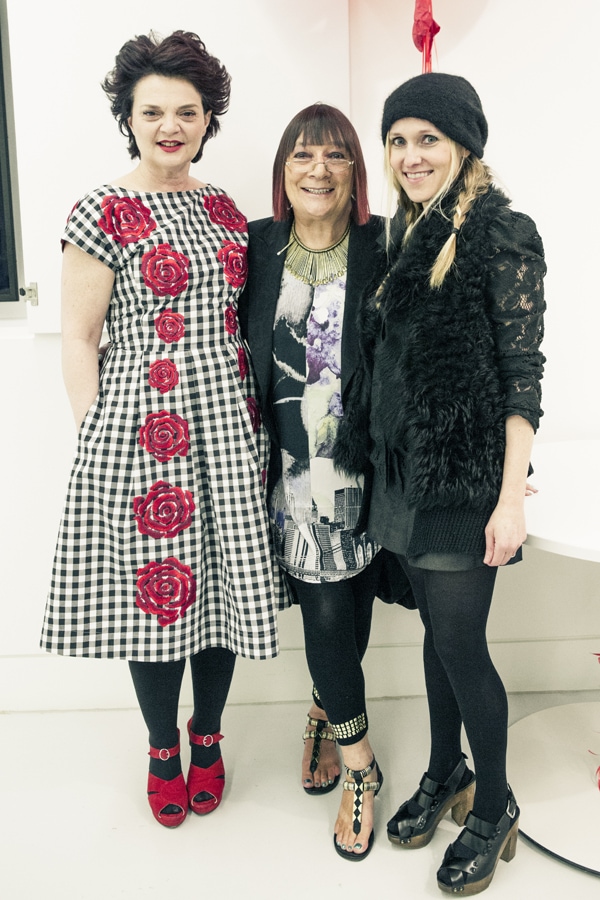 Courtney Blackman: Anything that says I work in fashion but I mean business, and probably in black – though I am trying to be more colourful. As I’m very tiny, I feel more commanding if I’m in heels. I have a pair of Acne cork-heeled wedges that I’ve been wearing for ages, and a pair of Surface to Air lace up wedges that go with anything and everything…and put a few more inches on my tiny frame.

NakedPRGirl: And what can we find in your makeup bag?

Courtney Blackman: I make my own skin cream and eye makeup remover, so those and then loads of Dermalogica skin care products, black eyeliner, black mascara and blush from MAC, random shades of lipsticks and lip tints from all over (freebies from gift bags), and AOFM makeup brushes – but only two of the twenty-four of them. That’s all I’ve figured out how to use.

NakedPRGirl: How do you describe Fashion Week? Who will you be representing at AW15?

Courtney Blackman: Creative chaos. No matter how much planning goes into a season, it will always feel chaotic, but completely exciting. We’ll be looking after AOFM Pro’s backstage schedule – AOFM Pro provides the backstage makeup (and sometimes hair) teams for loads of on-schedule shows around the globe. We’ll also be looking after the Philippines, yes the whole country, for London Fashion Week. They are competing in the British Fashion Council’s International Fashion Showcase and are tipped to win! Six of their star designers are coming over and they are insanely talented. And we’ll  be doing some special projects with AEVHA London (handbags) who will be exhibiting as part of the official London Fashion Week exhibition in Somerset House, Alexandra Harper Millinery (hats), Sapphires Model Management, Sugar Tables (sweets buffets) and WonderLuk (3D jewellery).

Courtney Blackman: I honestly enjoy every campaign we work on, as I just really like PR, but it was rather fun when we first took on Kate Nash. She had changed her sound to a more edgier punk Kate and changed her look. We used fashion to almost rebrand her and reestablish her. We worked with VOGUE.CO.UK to do a week’s series of ‘Today I’m Wearing’. That fed into more fashion press and just really got the ball rolling for Kate Nash as a global style icon, which is what she is referred to now across the globe. 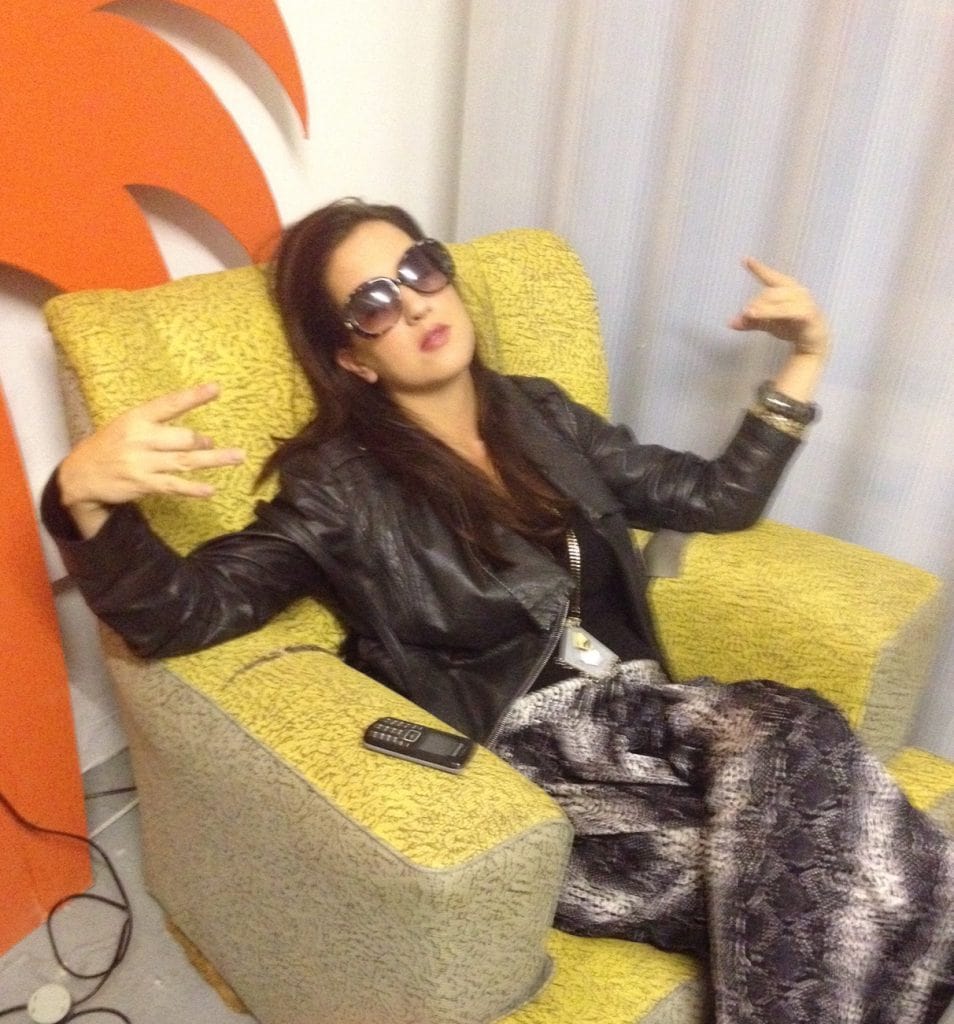 Courtney Blackman, “My Laura McCluskey, who’s been with me for nearly a decade.”

NakedPRGirl: What are your PR highs (as in high points) and PR lows?

Courtney Blackman: There’s a major rush of adrenalin after a successful event like a catwalk show or launch party, and signing a new client is always grand. Obviously lots of administrative work is on the cards in PR (reports, bookkeeping, VAT returns). That bit is not entirely fun, but has to be done.

NakedPRGirl: Where will you be in ten years time?

Courtney Blackman: Hopefully still doing what I’m doing, but on an even larger scale of course, as I do really love what I do.

Read Next: Getting Naked With fashion blogger Disneyrollergirl aka Navaz Batliwalla