I am a believer in the power of costume. Clothes can create an image that quite often signals social, economic and political status. In film, characters can be good, bad, rich, poor, from a different era, blending in, standing out, on the rise, on the edge, and all this can be echoed in the storytelling of costume. Last week Kinvara Balfour interviewed Oscar winning costume designer Sandy Powell at the V&A on the eve of the release of her new film Carol to uncover the behind the scenes secrets of costume design. 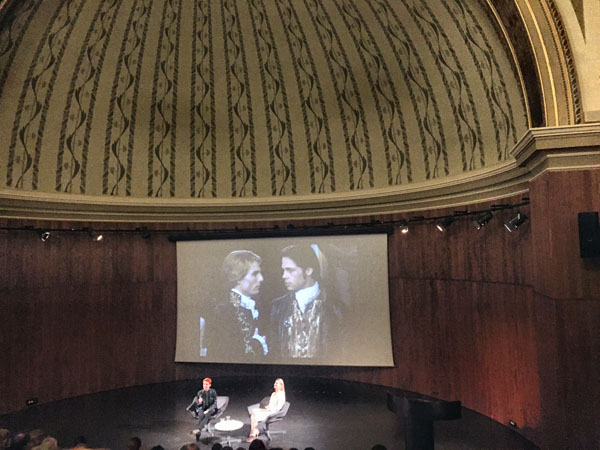 “You put the right garment on and the character appears,” Sandy Powell

Sandy’s CV is bursting with exciting projects from the Cinderella to Gangs of New York, Shakespeare in Love and Wolf of Wall Street. They’re certainly a diverse bunch from period dramas to Disney Princesses, which is probably why she says, “it depends on the project,” more than once in this interview. Working in the field she does, with differing timelines, an assortment of budgets and a new set of actors and extras each time, it is hardly surprising her approach is bespoke and changes from project to project.

“I love how it can transport you to another time and place so effectively,” Sandy Powell

The new film which features Cate Blanchett (pictured above) is directed by Todd Haynes and seems to strikes a chord with Sandy who admits she was happy to be doing press junkets to promote the new film. “If it’s a movie I didn’t really love, I’d prefer not but I love Carol so I’m happy to do it.” Behind the scenes Sandy revealed that costume designer for her starts with the script and with Carol, this also included an accompanying Look Book. “In that book is how Todd envisioned the film to be,” Sandy revealed, “It featured street style photography and there might be paintings or advertising from the period so it was a really good starting point with where to start and the world that he wanted to create.”

“I wasn’t a fairy tale girl. I liked clothes, I liked dressing up. From very young I was used to looking at fabric and patterns,” Sandy Powell

Yet, every film is different and hearing Sandy talk about her work on the Cinderella film made me realise how much work goes into big productions. “With Cinderella I had a long prep time, so I had six weeks for a ball gown. You read the script and you do have an idea. It might not be specific but I’ll have an idea about their colour and silhouette. Sometimes I think I can’t have an idea that quickly and then you go round and come back.” Ever the creative, she asserts her favourite places to source materials are still cheap shops in Shepherd’s Bush. But she is also aware of how the retail and fashion industry is changing  noting; “There used to be loads of good fabric shops and they’re slowly disappearing.” It isn’t just fabric shops that are becoming a rare commodity as also she reveals, “there aren’t enough tailors, or cutters or seamstresses as no one wants to do it.”

“A lot of my clothes in Cinderella were £1 fabric polyester ball gowns. The ugly sisters are mainly £1 a meter fabric!” Sandy Powell

Working with external brands can often be integral to a film as Sandy notes with the famous glass slipper that she was tasked to make into a wearable shoe. “I’ve worked with Swarovski a lot, I approached them for Cinderalla, and they were incredibly helpful and I couldn’t have done it without them. I also used the V&A and looked at the glass section.”

“Swarovski made the shoe. Of course it’s not wearable! I can’t believe people still ask that question. We made 8. It’s touring the world,” Sandy Powell

I’ve always had this romantic notion that after filming, costumes are probably stored in a beautiful showroom somewhere, but alas, I am wearing my rose tinted spectacles. “I’ve seen production companies sell costumes on eBay straight after filming to make the money back.” Yet in the creative process it can be quite a personal process. “I feel like they belong to me but they don’t,” she confesses. “I like to keep one or two pieces if I’m allowed so there’s an archive.”

“You have to treat every day at work as if you’re going to a party. That’s what we did,” Sandy Powell

In terms of scale, big budget films will require a dedicated team that will need follow the strong vision to create one spell-binding overall effect, for example on the set of Gangs of New York (pictured below) which featured Leonardo Di Caprio, hundreds of extras and over a year of filming. “On something on a bigger scale I have a team of people who check extras,” Sandy explained. “John Cowell is one of the biggest textile painters and he painted every single costume in Gangs of New York – even things which are meant to look new are painted and meant to look in context.” So one of the skills of being a costume designer like Sandy Powell is leadership and working with a team. “Delegation is part of the job. You have to give people the freedom to do what they want to do.” 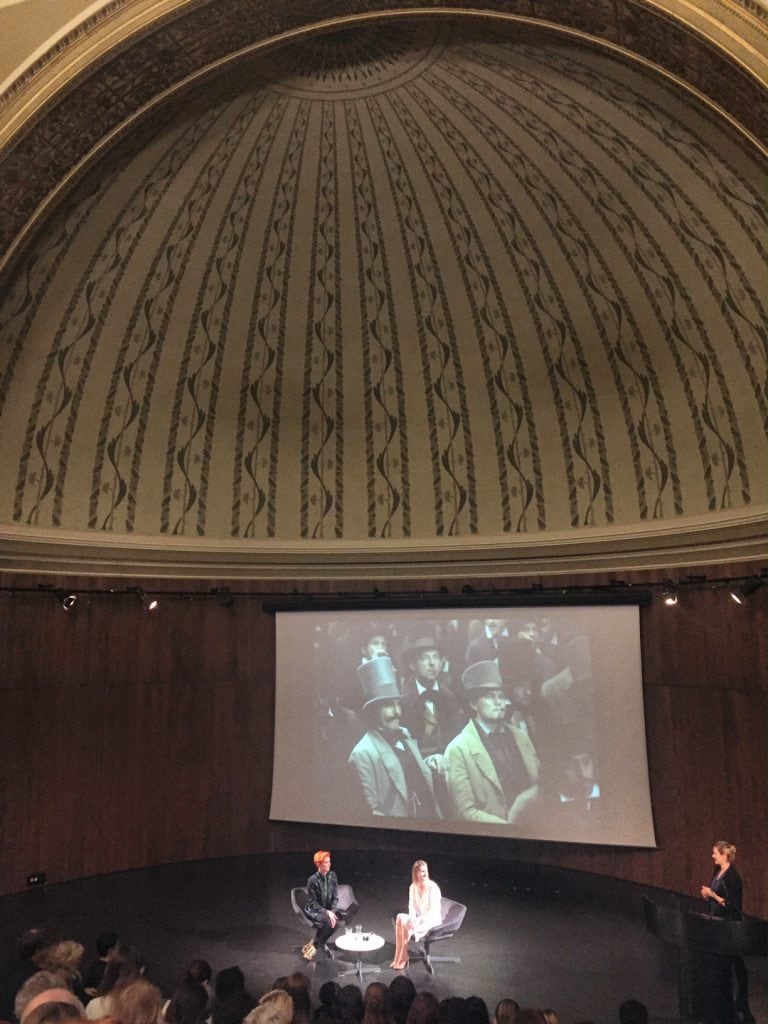 “Gangs of New York was really long and gruelling but I’m really proud of. It’s all challenging in a way,” Sandy Powell

So how indeed did she get a job as a costume designer? The answer is part hard work and part being in the right place at the right time. Sandy Powell did a foundation course at St Martins before meeting a useful contact in a club and making costumes for pop videos for a year. Since this isn’t the first person to make a career changing contact in a club (Patrick Cox and Mary Katrantzou), host Kinvara Balfour joked that “It’s all about meeting someone in a club! My advice would be get clubbing!” Networking, in clubs, or otherwise is a reoccurring theme in this industry, because when your lucky break comes along you have to take it. “Go up to the person you admire and say ‘hello I’m here'” she advises. “It’s usually the path you cross when you need someone. Make yourself available and keep trying. You have to be determined and work hard and be prepared to work for not much money and sometimes no money.”

“I like costumes being made under my nose. I don’t do detailed drawings of a costume. I’d rather do a sketch and talk to the person and the makers,” Sandy Powell

When asked about the differences between fashion design and costume design, Sandy explains why she prefers the latter. “Fashion is designing for anonymous people, anonymous bodies. Costume designers are for a character. I prefer designing for characters. Fashion designing seems lonely to me. I wouldn’t want to design collections three or four times a year.” She also is aware of the changes the advances in digital has ushered in, but she is still very hands on. “The internet is good if you need to know something instantly but I still prefer books and magazines,” she explains. “Also I like lots of images around me rather than on a computer.”

“For Cates character in Carol I went to Conde Nast and looked at Vogue magazines for those exact months that the book was written,” Sandy Powell

On set, costume is just part of the process of getting an actor or actress into character, there is also make up which in period dramas, Sandy assets can be more important than the costume. “In an ideal world you work together and have worked together before, she says. “If you’re not together it can completely destroy it or make it.”

“Everything starts with the underwear because underwear creates the shape for everything else to be put on top. Whatever the period.” Sandy Powell

It is a very different world to work in, one where you are fitting A-list actors and developing a close working relationship. “Most of them are insecure in some way and men are just as vain as women if not worse! Fittings are where you get to know them and where you see it happen. That’s the most interesting part. But you’re not best friends.”

“I don’t consciously design a dress for a sad scene. I don’t analyse it too deeply at the time,” Sandy Powell

As Sandy Powell sits on stage in her vibrant short red hair and contrasting green suit, you take away the impression that she is creative, talented and a great business woman who will always put all her energy into the projects she is working on. As she says; “The most important thing is make actors trust you. You have to let them know that you’re trying to help them to create their character.” Working with a talented team to create the perfect image to bring a character to life and tell their story is clearly her passion, and she has enough Oscars on her office shelf to confirm it.

Carol is in cinemas now. With thanks to Kinvara Balfour & the V&A – Victoria & Albert Museum.