The thing is…I’m not a film expert which, when you’re in a cinema full of movie fans at the BIFA Central Picturehouse watching Michael Sheen being interviewed for Time Out London can be a bit of a daunting realisation. BUT I have seen five Michael Sheen films, oh yes. Well, to be honest I’ve seen the excellent Far From The Madding Crowd and, well, all FOUR of the Twilight films which I could practically act in, but I definitely wouldn’t be winning an Oscar anytime soon. Here’s five not exactly movie or marketing related snippets I gleaned from the fabulous actor that is Michael Sheen. 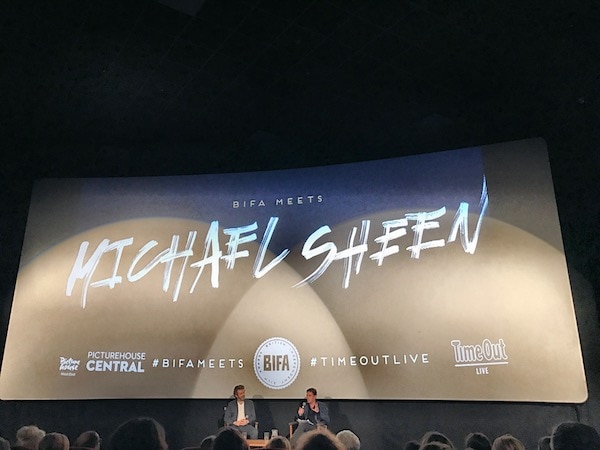 1 – “For families who don’t have access, how are we going to get people from privileged background in?’
Exactly! Exactly! When talking about his own ‘pathway’ into acting, Michael points out that he had a supportive family BUT he was lucky enough to have a discretionary grant to get into drama school. These days, the grants no longer exist, the school is no longer there, making us realise that those without cash are at a distinct disadvantage. “We all lose out if we don’t have a diverse set of people and opinions in the mix,” Sheen notes. And no diversity makes the world pretty dull.

2 – “I take Aro in Twilight as seriously as I take Frost in Frost/Nixon.”
Can we talk about Aro since it is my main point of reference? LOLS. “People tend to look down on it as a genre,” he explains. “But taking your place in the pantheon of vampires on film is an honour.” I mean, totally right! Stephanie Meyer said that Aro, aka head vamp, ‘had a voice like feathers’ despite being EVIL so Sheen decided that this dude had been alive for centuries and was probs completely off his vampire rocker. “He’s like a sentimental grandmother who likes the children and then might eat them,” he reveals drawing inspiration from Blue Meanies in Yellow Submarine, Child Catcher in Chitty Chitty Bang Bang and the Big Bad Wolf. Proving that no matter what the part is, or what the job is in life, you should always give it your all.

3 – “You don’t know what’s going to be the hook for your imagination”
High/low culture features prominently in Sheen’s world but he embraces it citing The Lobster as a favourite recent film which features a society where single people much find a mate within 45 days or be transformed into an animal of their choice (imagine – I’d be a bloody colourful bird by now). “Is that high brow or low brow? It’s unsettling? Your brain is trying to work out if it’s funny or is it poncy? It’s things your brain can’t pin down,” Sheen explains. So find a hook or a USP, work with it and don’t be snobby about it because you could be shutting off from great things.

4 – “For me really good acting is a balance between control and loss of control.”
And also life right? “Some actors just turn up and fly by seat of their pants and others do all the homework and don’t lose control,” Sheen says, careful to point out that his acting work which has been defined by roles including playing Tony Blair go beyond impersonation. “You want to take the audience with you, to go on the journey,” he explains and I agree. In life you don’t want to be ‘all the gear and no idea’ or like a bull in a China shop without thought for what you are doing…but you have to lose control sometimes.

5 – “It’s great to disappear into character, but its not great if you’re trying to build a career.“
In a business sense being memorable and recognisable are key to growing your career and marketing your latest venture. So it is in roles which are more recognisable that Sheen has enjoyed a flourishing career and he always focuses on what real person come alive. “We have the person that we want people to see on the outside, then the person that we’re scared we are,” he explains. “Then there’s the real person and I’m always looking for where they’re vulnerable.” And being vulnerable is a good thing sometimes because it makes us who we are, and can also make our best work.

And that’s all folks! Check out all my reviews as a Tastemaker over on Time Out London.